Often, step 1 is manic, as he tries madly to see both sides of his head at once.  A month or two ago, someone noticed, and I responded, “Yeah, it seems like the exciting thing is always on the other side.”

To which they replied, “Wow, Fear of Missing Out already.”

Being unfamiliar with the term but familiar with the English language, I figured out what they were talking about and laughingly agreed.  But suddenly, I began to see articles all over the internet about Fear of Missing Out, or FOMO.  The internet seemed abuzz with talk about FOMO and how social media was crippling “millennials” with this debilitating syndrome.

I saw it everywhere, both online and offline (an effect that, I similarly discovered, everybody online knew as the Baader-Meinhof Phenomenon.  FOMO is nothing new; indeed, it is at least ten years old).  Everybody was talking about FOMO, and they were talking about it everywhere.

The Other Side of the Fence 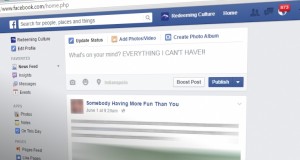 My son isn’t the only one with FOMO, not by a long shot.  A 2003 study suggested that 56% of social media users feel this phenomenon strongly.  Of course, as a modern variation on “the grass is always greener on the other side of the fence,” the reality is probably closer to 100%.  Have you ever compulsively checked Twitter, or wasted hours scrolling to the top of your feed, reading every single update?  How about watching your Facebook news feed while you watch a sporting event?  Maybe switched channels on TV at every commercial break, worried that you’d miss something better?  (Heck, picture-in-picture and its modern equivalent, tabbed web browsing, are FOMO enablers if I’ve ever seen one.) It’s why kids don’t like naps and adults like(d) Foursquare.  It’s why people comment “omg I hate u!!!!” when they’re jealous of you for whatever you’re doing.

The fact is, we’ve all seen the grass through that fence – and found the foliage we’re standing in to be severely lacking.  Though it’s become more common as smartphones and social media allow us 24/7 access to what our friends are doing, even the most luddite among us will experience that brief twinge of worry that “maybe there’s something going on that’s more fun than this.”

But the crazy thing is, you are going to miss out.  There is something better happening.  That grass over there is greener.

Reading that might give you one of two reactions.

See, the problem with greener grass isn’t in the fact that it’s greener.  It’s not even in noticing that it is greener.  It’s in the crippling terror that something more fun and rewarding could be going on right now.  So let’s destroy fear with the truth: Something more fun is going on somewhere, in Heaven or on Earth.  Maybe in several somewheres.

But God hasn’t put you in any of those places.

BAT: Be All There

Paul saw the grass as greener on the other side.  And when he said the other side, he meant the other side:  “I am hard pressed between the two. My desire is to depart and be with Christ, for that is far better. But to remain in the flesh is more necessary on your account.” (Philippians 1:23-24 ESV, emphasis added)

Not only was something more fun going on in Heaven, it was something far better.  But even though he knew that dying to be with Jesus was more fun, more rewarding, and overall better, Paul was placed on Earth in that moment to help guide the Christians at Philippi, and elsewhere in Asia Minor.

So be like Paul.  Don’t let Fear of Missing Out destroy your ability to enjoy and be effective where you are.  When God places you somewhere, Be All There.  God places His people in odd places sometimes, but it’s never an accident.  And if you’re not a Christian, maybe God put you in that place to meet Him.

The grass is greener somewhere, but don’t pine for somewhere.  Be all there.

Want to help support Redeeming Culture?  Click here to find out how.  Don’t worry, you won’t miss out on anything on this page in the meantime.

Or maybe you read this and thought, “I could have done better.”  Cool.  Prove it.