During season three, Rick Berman became a producer who would allow his actors to direct. He made them go through ‘director’s school’, participating in all of the meetings and processes with other directors for quite a while before handing them episodes. 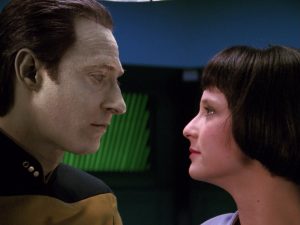 The first to try this was Jonathan Frakes, who debuted as a director with The Offspring, in which Data builds himself a daughter. Brent Spiner said, “‘The Offspring’ was maybe as good as we got. Jonathan came totally prepared and really had a style and flair, and just made a great episode.” While the cast could have employed their joking atmosphere to give him a hard time, instead on his first day the cast applauded and gave him a signed megaphone.

Brent Spiner said, “The good part is that really, everybody got on very well, and so if one of us directed, everybody pretty much stepped up to the plate to try to help them out as much as they could.”

In addition to the good things, there were still creative issues during season three. Writer Ron Moore explained, “Gene was still involved in the show and was throwing out scripts on, sort of what we felt were random impulses that he would just by edict say, ‘Well, this isn’t Star Trek.’” Some of Roddenberry’s rules included no time travel, no dream sequences, and not so much as even a mention of anything having to do with the original series. 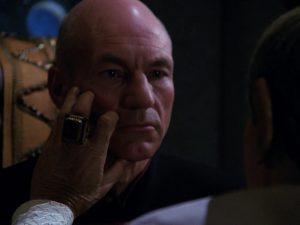 When writer Ira Stephen Behr wrote “Sarek,” he’d wanted Picard, while mind-melding with Sarek, to yell out in anguish, “Spock!” implying all kinds of things about Sarek’s psychology. He was told “Absolutely not. We don’t reference, you know, those original characters!” Ultimately he had to trick Rick Berman into allowing the word to be called out just once.

Berman was aware that the writers had a proper mess of guidelines to follow. For one thing, they had to follow the rules of both known science, and the fictitious science that had already been established in the original series and TNG. Yet, even though Roddenberry was closer to fully removing himself from the production process, Berman kept his vision alive. “You cant change the rules of the Universe every week.“ said story editor Larry Carroll. “Once you establish something in Star Trek, then Mr. Berrman makes sure that‘s the way it stays.” Berman said that he got a lot of crap from the writers for it, and looking back does think that he did it to his detriment. 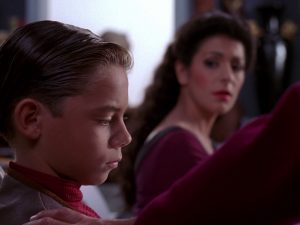 All the rules were broken eventually, often to the show’s benefit. Ron Moore wrote a script called The Bonding in which a child had replicated his late mother. Michael Pillar pushed for it, but the script had an issue: in Roddenberry’s future, kids would not mourn. They would simply accept death as a part of life, and he said ‘no’ to the idea. So they flipped it, and made a show about a kid who doesn’t mourn, and just how odd that is. Dancing around the rules is also why they came up with non-time-travel episodes such as those with alternate universes or alternate futures.

Moore also raised another common concern about the show which had haunted it for years already. “The one flaw I felt all the way through was that when Gene created Next Generation, I think he had started to believe his own press about being a utopian. People had been telling him for years that you have created this beautiful vision of the future, this idealistic utopia vision of what Earth can be, and I think he then decided that it was his job to write about a utopia, and he stopped wanting to tell dramatic stories about human beings, and people, and character conflict, and that was the fundamental issue between him and the writers. We were still writing drama… he wanted it to be an example, as opposed to an examination of who we were.”

Naren Shankar agreed, “The knock against TNG, which I think is pretty accurate sometimes, is the show is a little straight-jacketed, emotionally. …when you start from a hypothesis that people are perfect, and that they don’t argue about things… well, that’s not very interesting.”

Said Melinda Snodgrass, “When you’re worried about message, that’s a real tension. I think messages have to be buried…they have to be so far down, and not up front. I think Rick – he wasn’t looking at it as a show about family.”

Here’s where Michael Piller comes in again. Writer Rene Echevarria says that Piller “brought Star Trek to life and really turned it around…He was aware of the original but he wasn’t a fan of it. He wasn’t reverent about it.” Piller deliberately changed the direction of the stories, which many think was the turning point for the series.  “It needs to be about these people,” Echevarria continued, explaining Piller’s edict. 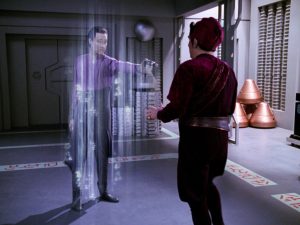 “It needs to stop being about ideas primarily. Ideas, of course, will come, but they don’t drive it. The people drive it. The things that happen need to be about those people. Not about the guest stars, not about the planet of the week, or the metaphor of the week for these people to encounter. But if it doesn’t touch them fundamentally as individuals, it’s not gonna touch the audience.”

Wil Wheaton said that Piller was “more responsible than anyone else for The Next Generation transforming itself into the amazing show it became…When Michael Piller took over and became head writer, everything changed. And that’s – I mean the show got really good. We did some of the best episodes we ever did under his leadership.” Some of the changes included putting Picard into some action scenes; For the first two seasons he’d spent most of his time on the bridge or in his conference room, just talking a lot. He wasn’t satisfied with this, and he was listened to. 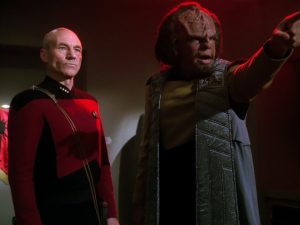 Another push came in the area of having story elements carry over. This was a no-no at the time because of syndication, where it was expected that people would only catch episodes here and there, and should not have to catch up with prior plot developments. Ron Moore realized that if Piller wanted the show to be about the characters, then never being able to refer to something that had happened in the past was a problem. He was assigned to write the Klingon themed episode, Sins of the Father, and he left it with ramifications still hanging, so that there would almost have to be future follow-up episodes. That move is probably what opened the doors for…

“What more can I say?” asks Piller, acknowledging that the episodes are widely considered among the ﬁnest of any Trek. “It came out of ulterior motives. You go back to the pilot of The Next Generation, and Q was created only because the studio insisted that they do two hours. Gene didn’t want to do it, but when the studio forced him, he created Q simply to ﬁll an hour. He ended up creating one of the great characters on the series. At the third season’s end, the studio said, ‘We want to do a cliffhanger because we have some contract problems with various actors, and we don’t know whether or not we’re going to bring them back.’ 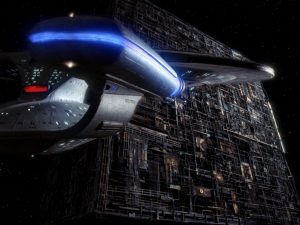 So we did ‘Best of Both Worlds’ as a cliffhanger, and it turned out to be the one that ultimately set Next Generation apart from the old series.” In “The Best of Both Worlds,” Piller took Picard—a cold, aloof, cerebral negotiator—and revealed his humanity. For the first time, the fans were committed to the character of Picard.

Piller wrote an untenable ending, believing that he would leave the show after his year with it, as he’d intended to do from the beginning. But then Roddenberry told him personally, and persuasively, that the show needed one more year to catch fire, and asked him to stay.

Regarding the season as a whole, Piller gave credit for the quality wherever it was due, “…we generated six or seven shows off of speculative material. We probably get 500 to 1000 scripts per year, more than any other TV show on the air. …Shows that came out of nowhere included ‘The Bonding,’ which created Ron Moore’s career. It was his ﬁrst credit and now he’s on staff, coming back this year. ‘Yesterday’s Enterprise‘ started out as a spec script. ‘The Offspring’ was a spec script that we bought and developed, ‘Sins of the Father’ was based on speculative material, ‘Tin Man’ was a spec script that needed very little rewriting, ‘Hollow Pursuits‘ was based on a concept from a speculative writer, ‘Sarek’ had its origins in an idea from a spec writer. …I must tell you, though, for every good script that we get, there are 99 that are about blasting the Ferengi out of the sky, which I don‘t think much of.”

Ira Steven Behr noted that the perspective fans and critics had, that season three was when The Next Generation finally pulled together across the board, was not a perspective the cast and crew was even aware of. “This was the year that it all turned around – I wish people had been telling us that when it was happening. We might’ve actually, you know, had a slightly better time. Maybe we all wouldn’t’ve jumped ship at the end of the year.”

Cinefantastique were often pretty hard on the show, but regarding this year, wrote, “The third season of STAR TREK: THE NEXT GENERATION has offered the best episodes of the new series. From the chaos of a first season crippled by inﬁghting and defections among its production staff, and a second season stunted by a writers’ strike, the new STAR TREK has emerged in its just ﬁnished third year as one of the best and most innovative shows on television.”

* Yes, I acknowledge that this is a strained application of that verse.

Next article Inconceivable!: God's Pursuit of The Princess Bride - Revisited