Given how late he came in, it is all the more amazing how much Michael Piller is probably the second most influential creative element to Star Trek: The Next Generation as a whole series. Season three of TNG is widely regarded as the series’ turning point. While it began in the same chaos as the first two years, it ended in the place of direction and calm that would continue until it left the airwaves, all the while being a season with a lot of high points and very few lows, as far as the episodes go. Certainly the cast began to accept the show as a genuine success in its own right. It makes sense: the original series had lasted three years, and its third year was considered the weakest, so reaching this year at all felt like a major milestone.

The homecoming of Gates McFadden was a real affirmation for the cast as well. 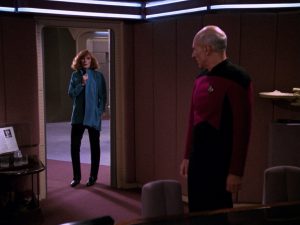 Interviewed on September 27, 1988, to promote the new season, Patrick Stewart said, “…when Gates left there was talk of ‘well, the personality and the character didn’t quite work out, and the relationships weren’t quite what we’d wanted,’ and I’d heard the same kinds of things toward the end of the second season.” Stewart definitely wanted her back, which he expressed to Berman, who eventually called her.

Even though some of the first episodes’ scripts had been written for Pulaski, making it take a while to get her back to being a proper Dr. Crusher, she said that her own encouragement came from, “The fans! Oh my goodness, the outpouring! I got thousands and thousands of letters, it was extraordinary! And I started to really get how amazing it is to have people who actually care enough to write a letter, and to say ‘we really did love what you did. And it DOES make you feel better, it makes you feel a LOT better.”

The leftover issue from the first two years was with the writing team, which had ever been plagued with conflicts and its staff continually changing. Ira Stephen Behr says that when he came aboard the production team early in the year, the writer’s room was in freefall. Rick Berman, who oversaw every script, was always angry. When Ron Moore joined, he found the staff in place shellshocked from the previous year’s strike, turmoil and turnover. Trek fan writing team Hans Beimer and Richard Manning were just bitter by that point.

“Michael Piller is responsible for saving the franchise,” Behr said. Piller came aboard third season, having written its first episode, “Evolution,” as a spec script.  Since his piece was the only one in circulation that everyone agreed was good, and Piller had producing experience, Gene not only bought it, but he also put Piller in charge of the writers. Piller discovered that there were very few scripts in process, such that by the filming of the third episode, they had nothing ready to shoot as the fourth. They also had no stories in development, often writing the next day’s shoot the night before. Piller said that it had to be “Very difficult on the actors to get pages the night before; they were very, very cooperative under very difficult circumstances.”

Without consultation, plans are frustrated, But with many counselors they succeed.
Proverbs 15:22

This led to the first of his three lasting positive impacts on the creative process at TNG. You see, staff writer Ron Moore’s script for “The Bonding” had not come through the usual channels. He had basically cajoled a crew member into accepting it while he was touring the set as a Trek fan. There was no agent; and yet they got Ron Moore aboard, someone they all thought to be a big benefit to the team, so Piller decided to throw open the doors for unsolicited scripts.  Rather than only accepting scripts from the staff or through agents, anyone could submit a script to Star Trek, as long as certain guidelines were met. It was the only show at the time that would take speculative material by amateurs. Said Rick Berman, “I had no problem with Michael’s philosophy of letting people submit scripts, because I had nothing to do with it.” It was fruitful too. Thousands of submissions came in, and for a while they got a few stories out of that ‘slush pile’ every season.

Without consultation, plans are frustrated, But with many counselors they succeed.
Proverbs 15:22
(Yes, I know, it’s the same one. Turns out he was good at this.)

Piller also took chances in identifying young talent. By the end of this season, all of the writers except for new kid Ron Moore would leave, but over time Piller would pull in the team that would become the backbone of the series latter years. Moore would eventually write 30 episodes, making him the most credited writer under Roddenberry, who automatically got a writing credit on every episode, even after he died.

One of the spec scripts Piller accepted was by René Echevarria, a waiter in Hollywood, who had written a story about Data having a daughter. He explained, “Part of what motivated me to start writing spec scripts, was I thought ‘This could be done better’.” So he wrote a bunch and sent them in, including “The Offspring,” which they liked.

In early season four Piller would bring in Brannon Braga, who would write 20 episodes; and Naren Shankar would come into the fold late in season five, finishing out the team that would write the bulk of the series’ latter years. Shankar would write 9 episodes, and he was the science consultant. Shankar said, “It was all of our first job in the business. …and we were all friends. It couldn’t have been a more nurturing environment to actually learn the craft.” One example of this was René Echevarria. He was given notes and asked to rewrite “The Offspring,” but he failed with it and it was heavily re-written by Snodgrass and Piller. Echevarria noted that, considering how much of the script was theirs, he was amazed that they left his name on it. Additionally, near the end of the year, Piller, who had written him off, called Rene up and gave him a second chance with “Transfigurations.” He wouldn’t come aboard as staff until the following year, but then he stayed through the finale, credited with 16 episodes.

These four would not only move up within the series, they would move on to head such other respected programs as CSI, 24, Medium, the Battlestar Galactica reboot, Outlander, and the brand-new Trek-like comedy The Orville. Eric Stillwell, who worked as Piller’s executive assistant on Star Trek: Insurrection, thought that Piller’s greatest gift was nurturing new writers and helping them develop their talent.

Uh…see above. I was just going to quote the same one again.

Piller’s third contribution to a functioning creative team was bringing the process of “Breaking the script”. Once a story idea had been developed, the entire team, as a team, would sort it out scene by scene, chronologically listing each event, conversation, important moments and lines, so thoroughly that the final writing part of the process was often just a fleshing out. The episode would be assigned to a writer to finish, but you can see how the writing credits can actually be pretty nebulous pointers to a particular writer’s contributions. Most of them created a lot more than they got credit for. What this process did is take the part of the writing that previous writers, mostly experienced ones from shows where there was less direct meddling, had hated, and just made it the standard way of doing things. The stories were worked out by teams. Often they would argue fiercely about plot minutiae, dramatic moments, or the sci-fi rules. Some of those conversations became part of the dialogue, but this also led to them working out things that could have become the subjects of much nit-picking by fans. Looking back, this team said that it was Piller who made the series come into full fruition in season 3. Within a year of arriving, he had managed to form a strong writing team, something that had eluded previous executives.

This month we’ve covered four of the top episodes of the season: The Defector, Yesterday’s Enterprise, The Offspring and The Best of Both Worlds; all examples of excellent writing within the series as a whole, not just the third season.