Matt McKinney joins us with his review of season 3, episode 10: The Defector. 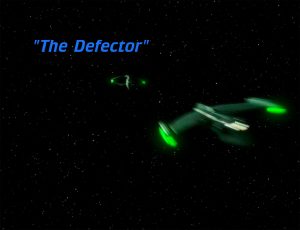 When a Romulan defector comes to the Enterprise, warning of a secret Romulan build-up to an invasion, Picard and company must decide whether or not to believe him. Through the secrets and lies and mysteries, they learn more about this man and ultimately act on his counsel, only to find that none of them knew the real truth. This episode is, in my opinion, everything good and worthwhile about Star Trek as a franchise and remains my absolute favorite episode.

The episode deals with two major themes: deception and redemption. As interesting as those two concepts are on their own, even more interestingly, this episode blends both concepts together into a sort of alloy of drama that makes this a high-water mark for all Trek.

Setal, the titular defector (played exquisitely by the always-wonderful James Sloyan), comes aboard the Enterprise full of anger and import, warning of a secret invasion in the works. He alludes to previous episode “The Enemy” as both a reminder of the enmity between their governments and as evidence of this build-up. As he is being questioned, Geordi and Data discover that the Romulan ship that had been pursuing his ship before reaching Enterpise had deliberately allowed him to escape. However, there are hints of cloaking devices at the planet where he claims the secret base has been built (in the Neutral Zone, where any incursion from either side could incite a war).

Setal seems to have a great deal of knowledge for a low-level clerk like he claims to be; and yet he has no detailed information, only vague, unproven threats. When Picard dismisses his warnings, Setal admits that he is actually the notorious Romulan admiral, Jarok, and that he came here, not to betray his people, but to save them from a war they cannot win. Picard ultimately decides to take the word of his enemy and they go into the Neutral Zone, only to find the planet empty and unclaimed.

As the Enterprise turns around to go back home, another infamous Romulan, Tomalak (the antagonist we met in “The Enemy”) appears to capture the Federation flagship and use this incident to shame their enemies into military capitulation. Picard, using illusions of his own, reveals that he had arranged for cloaked Klingon back-up to accompany him. Now, instead of capturing an overwhelmed enemy, Tomalak is forced to choose between a mutually destructive skirmish or for both sides to break off. He unhappily agrees to the latter and Enterprise returns to Federation space, having avoided starting an intergalactic war—but this ending is not nearly so happy for Jarok. He had been sincere, but his anti-war leanings since becoming a father had made him suspect among his own government, and he had failed this test of his loyalty, surrendering his life and future, only to stop a war that was never coming in the first place. The story ends with Jarok dead by his own hand among Starfleet enemies, but enemies who hope to one day be able to tell his family his true courage. 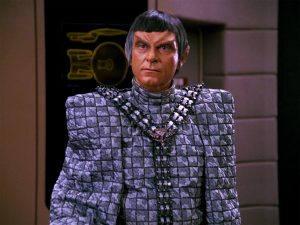 While “Star Trek” has always been a story told from a materialistic perspective (no supernatural elements), there have always been elements of wisdom and morality that weave into the work, despite denying the spiritual value of such things. In this episode, a man is forced to deal with having spent his whole life perpetuating a wrong system, and with the sacrifices needed to prevent his daughter from paying the price. Like Solomon’s description of his own excesses and accumulation of power and wealth, Jarok found his former successes to be meaningless. It was the love for his newly-born daughter that told him that he had to “change the world for her,” even if the cost of doing so was the very relationship with said child.

Indeed this act, which forces Jarok into permanent exile, evokes the purest form of love: sacrifice. In his own poetic words, “She will grow up believing that her father is a traitor…but she will grow up.” While the show’s writer, Ronald D. Moore, certainly did not deliberately write Jarok as a symbol of Christ, that element of selfless sacrifice permeates the character. 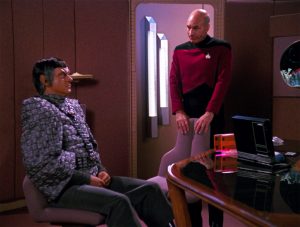 It is this act that convinces Captain Picard to overcome his own mistrust of Jarok, a mistrust which is certainly compounded by the man’s multiple deceptions even in the short time he was on the Enterprise. If Jarok seeks redemption for his past sins as a conqueror, Picard is the one in whose eyes that redemption must be earned.

We see two extremes of emotion beside Picard: Data, who has no emotions and, thus, is completely open to this enemy and shows him unerring respect and courtesy; and Worf, whose bitterness over his own past led him to literally allow another Romulan to die in “The Enemy” (which is indirectly alluded to). Picard sits between these two men, open and peaceful in his principles, yet with his own history with Romulans that, while nowhere near as hard as Worf’s, still leads him to distrust Jarok. When Jarok finally breaks through to Picard through his act of sacrifice, he finds an advocate who will now risk all to see his quest for redemption through; and even after Jarok takes his own life, Picard has nothing but respect and admiration for the man, declaring him truly courageous. Indeed, from now on, Picard’s dealings with the Romulans will always have an edge of forgiveness and a hand of friendship to them. 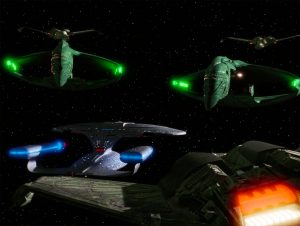 It is the odd mingling of the two themes, which would normally be at odds, that really marks this as such a well-written story. The episode opens with Data acting out a scene from Shakespeare’s “Henry V,” which is about a king disguising himself as a common soldier (which is a foreshadow of Jarok’s true nature). Not all deceptions are noble, however, and the antagonists, represented by Tomalak, are likewise brewing their own illusion; the false invasion. The deceptions of both Romulans comprise the shifting evidence for whether or not the Enterprise should go into the Neutral Zone, as either action or inaction could potentially start a war. Picard, ever the clever captain, brings the Klingons along with a brief, easily missed scene where he asks Worf to speak to “the Klingons” as they hail the ship. This is the first and last we hear of them until the climactic reveal of Picard’s trump card (a clever deception by the writer and director to keep the audience from predicting the climax).

This makes for a thrilling moment of the catastrophe being turned around with panache (I still grin from ear-to-ear at this turnabout), but it also represents the oxymoron of the noble deception. Had Picard had the Klingons simply accompany the Enterprise, Tomalak would have no-doubt remained cloaked and used this as evidence of an invasion by a Federation/Klingon alliance. It was the illusion that Picard and his crew were more vulnerable than they were that lulled Tomalak into revealing his own deception, which then led to the peaceful stalemate that was the best outcome these events could lead to. It’s an odd contradiction when a lie reveals the truth, and yet Christianity is built on odd contradictions (the first shall be last, whoever wants to rule must serve, whoever humbles himself will be exalted, etc).

Exciting, tragic, cerebral and passionate, “The Defector” remains my personal favorite Star Trek episode of all time. Every time I watch it, I find some new angle, some new little bit of foreshadowing or theme repetition or just something cool I’d never noticed before. It even stands well on its own, with enough continuity to reward regular viewers, but explaining all the necessary backstory so as to allow this to be an ideal jumping-on point for new viewers.

If you’ve never seen “The Defector” before, I highly recommend it.

If you’ve seen “The Defector” before, I highly recommend it.

I just highly recommend it.

Thank you for reading Redeeming Culture!  Trektember returns tomorrow with Yesterday’s Enterprise. Make sure to come back, even if you have to come from another timeline!

Matt McKinney is a janitor in Louisville. You can see more of his work on YouTube or at www.pos-tos.com.

Matt McKinney
Matt McKinney is a janitor in Louisville. You can see more of his work on YouTube or at www.pos-tos.com.