This review does contain mild spoilers about Moulin Rouge, but seriously, you should watch it.

My wife and I love Baz Luhrmann’s 2001 film Moulin Rouge.  Excellent performances by talented actors and musicians, spectacle and humor, and of course love…how could you not like it?

But it isn’t exactly what you’d expect from a story about truth, beauty, freedom and love.  The tragic framing of the story belies its warm heart.  And it all starts with a strange, enchanted boy.

What does it say about a culture that the “strange, enchanted boy” is the dreamer?

The four driving forces of Moulin Rouge are Truth, Beauty, Freedom, and (above all) Love.  As a Christian (and as a human), I can’t help being drawn to that, but it’s not very often that I realize the gravity that those four words carry in my faith; how interconnected they are with one another and with my life.

Moulin Rouge celebrates these with that Robert Johnston calls “secular hymns.”  But while we celebrate them, can we ever really attain them?  The characters in the film can’t seem to.  Trapped in their lives, they give up their hopes of truth, beauty, freedom and love, and settle for something less.

We show the world moralism, or good feelings about a false god who wants to make us happy.  Unsatisfied, the world walks away.

This is no strange world to the people we meet every day.  Our world searches for truth, beauty, freedom and love, and they’ll madly snap up anything that promises it to them.  Sadly, though, the church – people who worship the One who holds all four in perfect harmony – remains silent.  We ignore and spurn the things we say we value, and we fall prey to the same thing the world is chained by.

So instead, we show the world moralism, or good feelings about a false god who wants to make us happy.  Unsatisfied, the world walks away.

The story of Jesus is not a story of endless Earthly blessings or even good morals.  It doesn’t settle for less.  No, it’s perfect truth; it’s stunning beauty; it’s eternal freedom.  It’s a love story.

Always this ridiculous obsession with love!

Prostitutes populate many pages of the Bible, and not just as side characters: Rahab and Tamar made it into the lineage of Jesus.  The woman who anointed Jesus’ feet before His crucifixion may have been a prostitute.  So why do so many unholy women make it into holy literature?

In Ezekiel 16, God tells us why by telling us of His love story with the nation of Israel.  He recounts when He saved them from death, and of the love He had lavished on them; the beautiful adornment, the sweet gifts, the protection and comfort.  He tells them how much He loves them and the lengths He’s willing to go to prove it.  Israel did nothing to earn this.  She couldn’t even if she tried.  She had nothing to give.  And yet He shows her mercy and grace; freely, undeservedly. 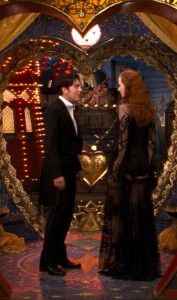 But it is not to last.  And when Israel turns from God and seeks out other lovers, other gods, he does not mince words.

“You trusted in your beauty, and played the whore.”

When Israel seeks out lesser pleasures instead of being delighted in the perfection of God, it’s as catastrophic as adultery.  And here it is important to remind you that Israel is a representative for each of us in the Old Testament: we have done the same.  After God saved us, and lavished unmerited love on us, we turned away and looked for weaker pleasures to fulfill our souls’ longings.

It’s the harshest truth in our life.  And it’s the most painful part of Christian’s, as he gazes upon the woman he loves knowing that her job is to give her love to another.

Yet through this pain, Christian chooses still… to love.

The Greatest Thing You’ll Ever Learn

Christian makes every excuse to lavish the woman he loves.  He spends time with her, gives her gifts, and tries to make her dreams come true.  He’s not deluded that she’s being faithful to him, but He chooses to be faithful to her nonetheless.

“God hates divorce.  And never, ever does it.”

Like John Piper says in his sermon about Ezekiel 16, “God hates divorce.  And never, ever does it.”  So, just when you think that He’s about to turn away from His beloved, He rescues Israel from the sin that she has chosen; and rather than divorcing her, He strengthens their covenant even more by making a way to atone for her sins – for our sins – with the blood of His very own son. It doesn’t matter what terrible sin she’s committed, how many times she’s turned aside, or how many times she’ll turn aside in the future. 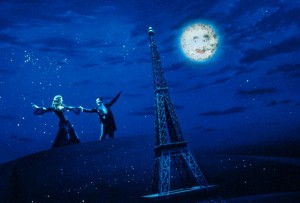 This isn’t some misplaced dedication or duty.  This is love, pure and simple; in fact, the unconditional love of God in the face of the most unlovely things we have done is why God is the definition of love.

This isn’t some long-faded story of love for a faraway people. It’s certainly not a fictional story about a writer and a courtesan at a nightclub. It’s a love story about the God who created the universe…and you.

Regardless of your sin, regardless of how many times you turn away, because of Christ, God will always return for you, singing sweetly of His love.

He will pursue you and love you until the stars burn out. Come what may.