Inside Out-right, Upright, Downright Happy All The Time
June 24, 2015 by David Atwell

After six years of sequels and below-par films, Pixar has once again showed us why they’re the best in the business.  Inside Out is a brilliantly-written, elegantly-scored, beautifully-animated feature that may or may not have made me cry (it totally did).  Its storyline was very reminiscent of classic Pixar, with its deft handling of difficult topics in a kid-friendly way.  And boy, were those topics a doozy.  Don’t worry –  There are no spoilers here.

That Could Have Been a Disaster

Riley is 11 years old, and pulls double duty as both the main character and setting of Inside Out.  And Riley has had a tough week.  After moving cross-country, her emotions are working overtime to try and sort out an appropriate reaction to their plight: Joy wants to keep Riley happy and upbeat at all costs, Fear is sure that she’ll be attacked by a bear in the middle of the city, Disgust hates the new house, Anger hates the horrifying broccoli pizza served at the pizzeria down the street, and Sadness…well, Sadness doesn’t have much to do.  The other four emotions don’t really let Riley feel sadness at all, mostly insisting that she remain out of the way and not touch anything.

Marshall Segal over at DesiringGod.org has already put together a great article on the interplay between Riley’s emotions and the importance of not pushing aside Sadness in favor of Joy; I highly recommend you read it.

But one of the most fascinating things about the film for me was that Pixar decided against including any sort of traditional villain.  It would have been simple to do, of course; she’s an 11-year-old girl, so maybe an emotion called Self-Doubt is literally creeping in to her brain.  Or perhaps Depression is trying to get in and the emotions have to unite and use their talents together to defeat it before it takes over.  Instead, Pixar decided instead to go with no villain, because our biggest enemy as human beings is actually ourselves.

How many times have your emotions betrayed you, or made you do something you don’t want to do?  Even Paul, one of the most prolific writers in the Bible and a founding apostle, said in Romans 7 that he had trouble with this.  This is normal, for Riley and for you.  And it’s very common that one emotion takes charge over the rest. 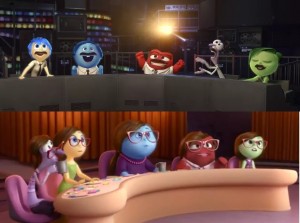 It took me until the montage at the end of the film to realize a brilliant aspect to the characters of Inside Out; all of the humans have a different emotion at the helm of their mind.  Riley’s mind, of course, is led by Joy, while her mom’s mind is helmed by Sadness and her dad’s is led by Anger.  Although neither is particularly sad or angry regularly, when difficult situations present themselves, that is the emotion that leads the response to the situation.

You’ve certainly met people who are led by different emotions.  Some people just seem full of disgust all the time, and others are always afraid.  Whether you’ve been led by those emotions for your entire life, or some moment or series of experiences has put a certain emotion in charge, what is the driving emotion that takes charge in your life?  The Bible warns us against allowing anger or hatred to rule (Ephesians 4:26), and nobody wants sadness to lead.  But it may be equally dangerous to try and shut everything out that isn’t Joy.

I’m Positive that You’ll Get Lost In There 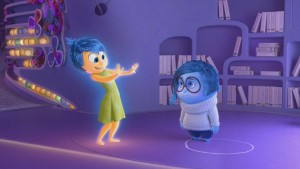 Riley’s emotions get a bit carried away with trying to keep her from ever being hurt, like when Joy draws a circle around Sadness and tries to get her to never leave the circle.  We try that ourselves, quite often; we think that if we can only keep our sadness bottled up, everything will be just fine.  But when Riley’s feelings do that, things start to fall apart.

I don’t want to get into the existential implications (and inevitable spoilers) that come when a personification of “Joy” is crying, but this film paints a really beautiful picture of what happens when you try to ignore and push aside certain emotions without dealing with them appropriately.

It’s no secret that the Christian life focuses on joy a lot.  That is true and good.  But when you grow up in the church, it is a common thing to hear that you should “rejoice in the Lord always.”  While the phrase is Biblical, the way in which it was often presented suggests that we should never be anything but smiling at all times.  “Good Christians,” I was told often in disapproving glances and shakes of the head, “don’t get upset.  They should always be joyful.”

The Bible also tells us the story of Job, who mourned bitterly for all he lost and about whom it was said “in all this Job did not sin.”  It tells us about Jesus, who preached “Blessed are those who mourn,” comforted those who were crying, and cried himself over the loss of a friend and the unfaithfulness of a city before being betrayed by a friend and murdered for a crime he didn’t commit.  Crying and mourning is as much of a natural and normal part of the Christian life as happiness is.

Praise God that He does not require us to put on fake happiness all the time.  Praise Him that He instead gives us a miraculous joy even in that sadness.  And praise Him that He will be with us.

“Behold, the dwelling place of God is with man. He will dwell with them, and they will be his people, and God himself will be with them as their God. He will wipe away every tear from their eyes, and death shall be no more, neither shall there be mourning, nor crying, nor pain anymore, for the former things have passed away.”

Weeping is ok.  It is good.  And one day, God will turn it into dancing.

Thanks for reading Redeeming Culture! Check out our other Disney review about Frozen. And if you like what you see, we’d love your support.