Spoiler Alert: This post assumes you’ve seen Disney’s Frozen. You have been warned. 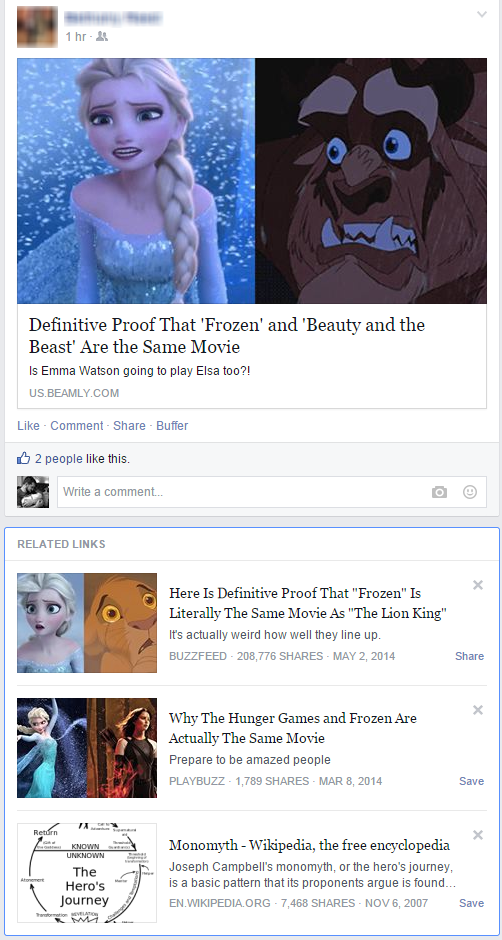 Clickbait sites love to compare popular movies to other popular culture.  “Avatar is the same as Pocahontas!,” they scream out on Facebook and Twitter.  “The Lion King is the same as Hamlet!”  “Robin Hood is jsut like Gladiator!”  “22 Jump Street is exactly the same as 21 Jump Street!”  But for all of the excited cries that a connection has been found, few are as excited about their discovery as the person who finds a connection between Disney’s super hit Frozen and…pretty much every other movie.

In 1949, mythologist Joseph Campbell released a book called “The Hero with a Thousand Faces,” where he introduced the world to his concept of the Monomyth, sometimes retold as “The Hero’s Journey.”  Epic stories and mythologies all over the world, he argued, followed a similar pattern.  There was only one story, told in a thousand ways.  And there was only one hero, with a thousand faces.

Depending on whether you view Elsa or Anna as the protagonist of Frozen, either one fits the archetype and can be said to be progressing through the stages of departure, initiation and return. Elsa’s “Crossing the Threshold” moment is somewhat literal as she mounts the staircase she created during her “Let It Go” solo. Anna’s “Apotheosis” is a literal death which teaches her the power of the love inside her. Elsa expresses herself as the “Master of Two Worlds” when she finally accepts the crown and uses her powers to throw a skating party for her kingdom. And Anna gains the “Freedom to Live” when the sisters decide to leave the gates to Arendelle open forever.

It’s a classic story archetype. And it’s part of why Frozen has been so popular.

Variations on the monomythological framework can be applied to any number of stories, and more superficial similarities can be brought in to give extra boost to comparisons between particular films (often using the dubious clickbait title “definitive proof that they are literally the exact same movie”. It all goes to show just how powerful the monomyth is at grabbing our heart and pulling us in to the narrative at hand, and how much of a shock it can be to discover these similarities in the stories that we love.

Shakespeare, Chaucer, Twain, Tolkien, Lewis, Rowling – the use of this framework isn’t limited to Disney. Authors around the world have seen what we really prefer in our stories and used that knowledge to their advantage, whether intentionally or unknowingly. It’s a powerful archetype; an overarching metanarrative that lies at the core of beloved stories the world over. You can apply the monomyth to ancient stories worldwide, even cultures that had little or no interaction when they were created.

That must mean that this goes deeper than just the stories themselves.

Frozen is one of the most popular Disney films ever made; it’s beautiful in both storytelling and visual language, and makes a great artistic statement about the value of familial love. The songs are some of the best that Disney has produced in decades. It’s also a bit of a departure from Disney’s typical princess-finds-her-prince formula. But I think the true power of the film is the monomyth core which speaks to the heart of those who see it. Sure, it’s fiction. But it also illuminates truth.

C.S. Lewis had a phrase for this phenomenon: “true myth.” At its core, we like the story of Frozen because it resonates with the truth in our hearts.

When Christ entered this world, he sought to save us from the curse that would freeze our hearts solid. His power and call to change frightened everyone who wanted to continue pursuing their own ends, but though they sought his death, he rose more powerful than they could imagine, thawing our hearts and freeing our world from the frigid grip of sin.

Then He placed that story into our hearts so that whenever we heard something similar, it would remind us of the truth and make us smile. It totally worked; the most successful narratives are the ones closest to the True Myth.

And I suppose adding a silly animated snowman doesn’t hurt.

Joseph Campbell’s [amazon text=The Hero with a Thosand Faces&asin=1577315936] and millions of other books are available on Amazon; buying any of them through our referral link helps support Redeeming Culture at no additional cost to you. Or if you’d like some new threads, check out our Redbubble store to support the site in style. Thank you!

Next article #052 - Whiplash and The Cost of Perfection