Welcome to a new Redeeming Culture feature!  Stream Powered gives a once-over to new and upcoming Netflix and Amazon Prime releases, seeking to redeem your season binges for Christ.

Note: this article will spoil 2012’s The Avengers, as well as season 1 of Agents of S.H.I.E.L.D. and minor spoilers for Captain America: The Winter Soldier and Iron Man 3.

In 2012, after the premiere of The Avengers, the hashtag #CoulsonLives began trending.  Of course, this was silly; Agent Phil Coulson very dramatically and publicly died in that film, a beloved minor character cut down by the villain, but used as a rallying point for the heroes.

But since 2011’s short film A Funny Thing Happened on the Way to Thor’s Hammer, Coulson has been more than just a minor character.  Aided undoubtedly by Clark Gregg’s wry, no-nonsense delivery and deadpan action humor, Coulson’s saving of an innocent gas station clerk by dispatching of two petty thugs with only a bag of flour made him instantly likable; far more than just a deskbound pencil-pusher, Coulson was a serious hero and found an instant fanbase.

When he was brutally murdered by Loki in The Avengers, rather than protesting or complaining, Coulson fans simply chose to deny his murder.  #CoulsonLives trended on Twitter, long posts on Tumblr were written about how Nick Fury had faked “the Son of Coul’s” death, and before long, Marvel took notice.  When Clark Gregg was chosen to helm Agents of S.H.I.E.L.D., Coulson fans took this as a sign that their campaign of denial had worked; they had successfully raised their beloved Agent from the dead.

And thus Agents of S.H.I.E.L.D. was born.  Since Season 2 hits Netflix tomorrow, let’s look at some of the parallels we can draw out of Season 1. 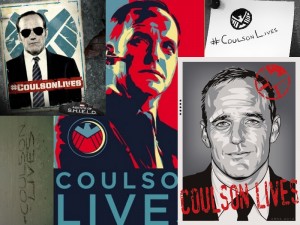 Coulson’s nature in the first season of Agents is shrouded in mystery; he was dead, but now he’s alive – a fact which is covered up rather neatly to most of the world – but the events surrounding his resurrection (or salvation) are a mystery, even to himself.  He recruits a team to chase down an evil organization that’s misusing advanced technology like Extremis (introduced in Iron Man 3), a body-altering compound which gives incredible strength at the cost of the user’s life.

Of course, obvious Biblical parallels are obvious: A charismatic, heroic figure being killed and raised from the dead, and then embarking upon a mission to save people afflicted with a strange and deadly disease, even though they’re against him?  There is a clear, and likely intentional, allusion to Jesus here.

But if we dig a bit deeper, we see – especially approaching the end of the season – that Coulson lacks one crucial similarity with Jesus: in John 10:17-18, Jesus tells us that He can’t be killed, but instead voluntarily lays down His life for His people (and voluntarily picks it back up again).  Coulson’s decidedly not-magical resurrection at T.A.H.I.T.I. is increasingly discovered to be mysterious, questionably-moral, and as one scene seems to show, even against his own will.

This is a critical thing to notice.  Jesus isn’t just another participant on Joseph Campbell’s “Hero’s Journey.”  Jesus defines that story – and His movements within it are governed only by God.

The team’s pursuit of dangerous objects is more than just a framing device for the plot.  It also shows us a lot about our actions and the nature of sin. 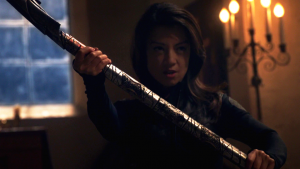 Take, for example, the Asgardian berserker staff first shown in “The Well.”  Its powers are formidable, but the cost is also great; not built for mortal humans, the staff is actually made to be wielded by an immortal, superhuman demigods from another world.  A human who holds it will be scarred for ages by the psychological damage it inflicts.  May is only able to wield the staff because she has already experienced that psychological damage, and even then she can only maintain it for a short time.

The items that the team discovers always reminds me of the dangers associated with treating sin lightly.  Like the staff, we face many powerful temptations in life; whether they are material or psychological, monetary or sexual, we are given opportunity after opportunity to take hold of one of these powerful objects.

The problem is, if we don’t do it the right way – if we don’t respond to our sexual desires with marital monogamy, for instance, or to our monetary desires with a happily generous heart, the misused sin will destroy us and those around us.

And those scars can take forever to heal.

Season 1 follows the adventures and misadventures of Skye, an activist hacker who initially sees S.H.I.E.L.D. as an evil organization that needs to be taken down, rather than as a protective force against the true evils in the world.  As the series progresses, she not only aids but joins the organization that she once fought against.  And when she fails, she’s eventually welcomed back in. 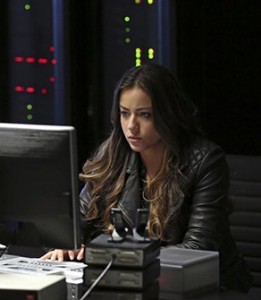 This is a beautiful example of one of my favorite Bible passages, Colossians 1:15-23.  If you’ve known me for very long, you may be aware of why I like that passage so much; it portrays the entire journey of God and of the Christian in a powerful and poetic way.  It begins by telling us about Jesus, His nature and work; then, it turns in verse 21 and begins talking to us.  “But you,” it says.  And everything that follows details what happens to us, and what happened to Skye.

Before being called, every Christian was a mess.  But don’t let that get in the way of your reality: God has made you a part of His team.

Beyond just flying around the world in a really sweet jet, the agents have a mission to accomplish.  They’ve been called to a daunting, impossible task: save the world.

That’s our mission, too.  How has God called you to help complete it?

Thanks for reading Redeeming Culture. Marvel’s Agents of S.H.I.E.L.D., season 2 will be available on Netflix in the U.S. starting on June 11; click here to watch.

Want to write for us? We’d love to hear what you have to say. And if you feel led to support Redeeming Culture, click here.  Thank you.