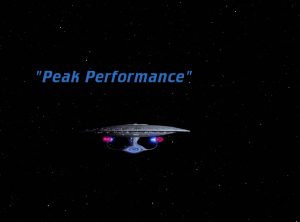 Here’s a rule of thumb for revisiting Star Trek: The Next Generation – just because an episode exists within the dark reaches of mediocrity and bad CGI found in the first two seasons, does not mean it is automatically an inferior episode. Trekkers, I present to you a case in point: “Peak Performance.” When the call for Trektember writers Picard-maneuvered its way into my email inbox, I wasn’t surprised when the classic episodes were quickly taken by other writers. Nor was I shocked that this episode wasn’t hot on the list. But if you’ll allow me by reading on, I will prove to you that “Peak Performance” should be firmly implanted on your best-of-TNG list.

There are some strikes working against this episode, I’ll admit. First, the astronomical awfulness that is Dr. Katherine Pulaski is on full display. Not only does she hold the proverbial “idiot ball” throughout this episode, but she does it with her typically daft arrogance that makes all Trekkers shudder at the thought of her. But she serves a purpose here, so never mind her character. And sure, some of the set pieces don’t hold up so well, and the tabletop strategy game central to the episode is, well, a bit ridiculous; but “Peak Performance” still displays a central truth to the gospel that we don’t often see in entertainment. 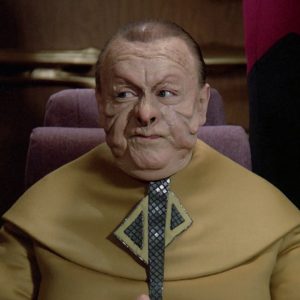 The long character arc of Data, simply one of the best in television history, was still at its early stages at the end of season two. He still had a lot to learn about what it is to be human. The validity of Data’s individuality had been affirmed several episodes prior in “The Measure of a Man,” so here he was beginning to explore more of the minute peculiarities of human nature. In the story, Data takes on Sirna Kolrami—a member of the Zakdorn species, supposedly the greatest innately strategic minds in the galaxy—in a game of Strategema. (It requires strategy, get it?) Upon first attempt, he loses. Humanoid beats machine, sends machine into existential crisis.

Dr. Pulaski: How can you lose? You’re supposed to be infallible.
Data: Obviously, I am not. 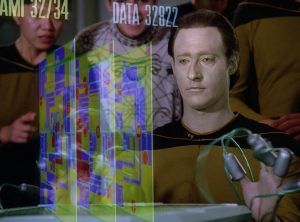 Ouch. Poor Data. I always felt sad that he couldn’t feel sad (you know, before his emotion chip). This is one of the more significant moments in Data’s quest to be human, and it seems dire to him. He goes so far as to surmise that he is damaged in some way. Perhaps that should be expected of a computer, but little did he know how human that self-doubt actually is. Taking himself out of the game (literally), he is left only to try and isolate the issue in seclusion. Self-doubt, trying endlessly to diagnose exactly what is wrong, attempting to return to infallibility, these are all things that humans struggle with daily. But there’s good news.

Picard: It is possible to commit no mistakes and still lose. That is not a weakness. That is life.

Y’all, I about cry every time I see this scene. Seriously. Because while it is partly terrifying and wholly disappointing to know that I am fallible, it is so reassuring to know that I don’t have to be perfect. Just like Data, we have all struggled with this notion. It’s tough to wrestle with our fallible natures. In fact, many religions focus on reaching a version of perfection through some kind of good works.

This is why we need the gospel. Because if we inevitably cannot reach perfection, what else can we surmise but that we, too, are damaged? This becomes destructive; it keeps us from engaging our community, prevents growth, and—as it did to Data—keeps us from fulfilling our duties (read: calling). 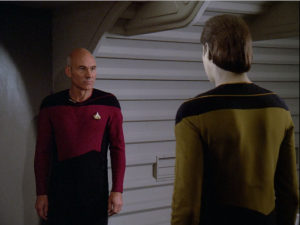 Captain Picard is my spirit animal. No lie. He’s my favorite character from any series ever and it’s because he’s got moments like these to act as a captain, which is often a lot like a father figure. It’s also because he pronounced “schedule” with a soft “sh” at the start, but I digress. The amazing Sir Patrick was still a bit too serious in Picard’s tone in season two, but I think the abrupt nature aids this scene with Data. As Data is so often purely calculated, so too can Picard be. He enters and nearly exits the scene purely matter-of-fact. It’s when Picard turns to Data to give him this life lesson that he softens, ever so slightly, and you see his father figure emerge. It’s so affirming to Data, and frankly to me too.

Our heavenly Father tells us that it’s okay. He tells us that we can make mistakes because He has taken care of them already. We can therefore be free to live to our fullest potential. That’s the gospel. And it’s the same principle that gives Data a new resiliency to take on his role as acting first officer. It ultimately gives him greater freedom to explore new ways to beat Kolrami. What once seemed impossible, he eventually achieves. So, too, our own peak performance cannot be achieved through striving for perfection. Because that’s impossible. It comes by recognizing our weaknesses and allowing ourselves to commit mistakes. 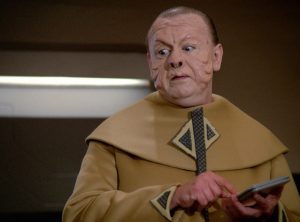 What surrounds all this is classic Trek thrills, characters, and story. The Ferengi are still in the process of transitioning from being the attempted “big bads” of the series (a laughable notion now) to the comical, mustache-twirling antagonists we know them as today. This is a rare moment where they still pose a bit of legitimate threat, if only because they get the jump on the Enterprise. Wesley has some of his better moments here, and the conversations between Troi and Data on human nature are deep and delightful. Simply put, “Peak Performance” is peak TNG.

Thank you for reading Redeeming Culture!  Trektember returns tomorrow with Season 3’s The Defector. We’ll see you then!

Mark Wingerter is a writer and filmmaker from Greensboro, NC. He is also in the middle of another series about Star Trek: The Next Generation on Reel World Theology. He is analytical, perhaps too much so, and therefore must share his opinion in a variety of creative outlets. He is very thankful for those who put up with it, most of all his wife, Sarah. You can feed that addiction by following him on Twitter at @MarkWingdinger.

It’s a great pick, Mark. I re-watched it because of this upcoming article, and it’s just a cracker-jack episode. I didn’t see that before. The feeling of excitement about a ship-wide event is present throughout the show. As simple as the story is, it remains energetic. I think it’s bolstered by having only an A plot, rather than the A plot – B plot structure that was more common.

I’ve done a fair bit of re-watching during this writing season, and more than a few episodes have risen in my estimation. I’ve joined the crowd on Darmok being a good one, and the second half of Best of Both Worlds no longer feels like a letdown. Those I expected. This was one of my two surprises, along with Where Silence Has Lease.

For me it’s not what they’re about as much as how they’re about them that impresses me. Peak Performance has character and friendliness. It’s almost a companion piece to Lower Decks in the ways it feels like a whole ship, rather than just a set of important characters. My other unexpectedly boosted episode, Where Silence Has Lease, is the flip-side of these, close, tight, taut, a very well directed suspense piece.

Nice writing up there, sir.