Star Trek celebrates its fiftieth anniversary today! So, here on Redeeming Culture, we’re going to release a short review of every episode of Season One, one episode per day, all month long; for each episode, we’re writing a 3-sentence recap, a 3-word review, and (as much as we can) answering the questions “What fears or hopes are conquered or realized?” and “How does this point to Jesus or to the way God made us?”

Today’s episode is the first episode of Star Trek to have ever aired on September 8, 1966: The Man Trap.  This episode is being reviewed “out of time” so that it coincides with the fiftieth anniversary of the first showing of the show: this post went live exactly fifty years after the show went on the air. 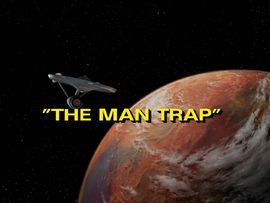 Kirk and McCoy beam down to check up on a frontier archaeologist and his wife, Robert and Nancy Crater – the latter of whom McCoy once had romantic involvement with. But Robert is acting hostile, and something is odd about Nancy (though only the audience knows that at first). As the investigation into a couple of unexplained deaths continues, it becomes clear that Nancy is not the woman Bones used to know, and maybe isn’t a woman at all.

Much like in The Corbomite Maneuver, this episode deals with emotions misplaced in a person or thing that does not deserve it. Instead of fear and obedience, however, Nancy Crater demands love and aid, drawing upon the candle that McCoy still seems to hold for her. But she does not have love and aid for him; instead, she seeks to drain him and the rest of the crew of the salt in his body.

The Biblical parallel cannot be ignored. In Matthew 5, Mark 9, and Luke 14, Jesus admonishes people to run from sin and pursue righteousness. “Have salt in yourselves, and be at peace with one another,” he says in Mark 9:50 (ESV); that is, be set apart from the world around you, different in flavor and seeking to preserve others. “If the salt has lost its saltiness, how will you make it salty again?” As McCoy discovers in his examination, without salt – without the holiness and set-apart-ness of who we are meant to be – we die.

Our world is very unlike the wasteland of M-113, but there is one thing in common: a creature is roaming around, seeking to remove our saltiness and destroy us in the process. No matter what that monster looks like, it is sin; and we have to kill it, even though it pains us to do so. It’s only a matter of time before that monster destroys us; listen to the warnings of your friends and of the Spirit as they prove that the trust you’ve placed in the salt vampire will kill you in the end.

Thank you for reading Redeeming Culture! Come back tomorrow for more Trektember as we look at the eighth episode of Star Trek: “Balance of Terror.”