Okay, straight talk for a second: Doctor Who is one of my favorite television shows.  And aside from a brief listicle in 2015 for the 10th Anniversary of the revived show, I’ve written…well, nothing on this site about the show.  And part of the reason is that I wasn’t sure how to handle him, how to do him justice.  The Doctor is a pretty massive figure to decipher.

As we discussed last week, he’s a very Christlike figure in many ways; he’s transcendent beyond time and space, he makes people better, he’s a sacrificial hero, and he’s steeped and flooded with destiny.  But he’s not perfectly Christlike.  Not even close.  That’s why he’s been split into two articles: because in this one,  we take a look at how, in many ways, the Doctor isn’t lovable; he’s pitiable.

When he can’t save, he tends to destroy.  Without a companion, he turns to vengeance.  And without hope, he is a ticking bomb.

The Doctor never travels alone for long; if he did, either he or the universe would end up dead.  He’s got an overactive sense of justice, and that justice needs the seat belt that his companion provides.  In the rare instances we see him alone for extended periods, he goes a little bit off the deep end; for instance, when the Tenth Doctor lands on Mars in 2059.  He’s been traveling alone for a while, and having just said goodbye to one friend, he’s soon faced with the loss of someone he likes again – so he claims mastery over time and space, calling himself “Time Lord Victorious,” willing to rip apart the timeline, to doom billions to nonexistence in order to satisfy his own selfishness. 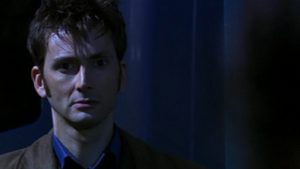 This isn’t the only example.  The Eleventh Doctor got mopey when Amy and Rory left him at the hands of the Weeping Angels; the War Doctor traveled alone for so long that he abandoned his very name out of embarrassment and fear for what he might do next.  The Doctor doesn’t cope with loneliness or loss very well; he can lose his grasp on what is good and toss away his values.  The salvific nature of the Doctor we talked about last week has a painful dark side: when he can’t save, he tends to destroy.  Without a companion, he turns to vengeance.  And without hope, he is a ticking bomb.

And sometimes, that bomb explodes.

There was a bad day.  Bad stuff happened.

He fell from grace and lost everything on the way down.

The Doctor is the victim of a tragedy of his own making.  In the modern series, the Time War destroyed his entire race, leaving him to be the Last of the Time Lords; but even at the beginning, he was a renegade in self-imposed exile after stealing a miraculous ship and running away from his home planet.  He started out as a high-born Gallifreyan – a Time Lord with an unbelievable birthright, to rule over time and space – but he gave up his position and his people.  He lost everything, forever. 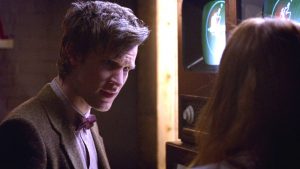 Even tossing aside the profound loss of his people, he’s seen companions depart and witnessed heartbreaking loss on a galactic scale.  The Doctor is a profoundly tragic character, despite his marvelous life and his amazing ship; he fell from grace and lost everything on the way down.

Which might explain why he never really puts down roots.

Bigger on the Inside

His rebellion keeps him spinning, reeling, always running until the corridors run out.

But he’s not just lonely.  He’s also homeless.  Sure, he has the TARDIS, but that basically just amounts to a super-awesome RV; he doesn’t really have a home, a place to set down roots.  He abandoned it when he ran, and the Time War took away any hope of ever getting it back.  But what’s worse is, none of it was because of an accident or bad luck; he left Gallifrey, and his actions in the Time War meant that he could never go home again. 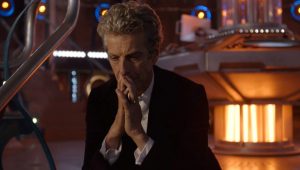 Like sand slipping through his hands, people and events pass in and out of his long, long life.  Without the comfort of a place or a people to return to, he has no true center and must always be going to the next place.   Because he chose to turn his back on who he was, the whole universe began to fall apart around him.  His rebellion keeps him spinning, reeling, always running until the corridors run out.  There’s nowhere for him to go back to because he’s burned all his bridges.

Sometimes that’s a good thing.  But usually it’s not.

Rule One: The Doctor Lies

Something core to his character in one body could be anathema to his next.

One of the core parts of the Doctor’s personality is the fact that he’s fundamentally in flux.  His character regularly “regenerates,” taking new form (and a new actor) as well as a new personality and mannerisms, but keeping all of his memories and values.  The first few episodes of each new incarnation’s life are often spent discovering who the new Doctor is and what he’s capable of, and sometimes with convincing the old companion, along with the audience – and sometimes even himself – that he’s still the same old Time Lord we know and love.  But is he? 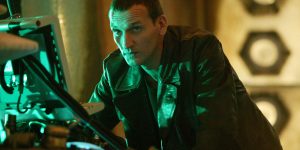 Often, the new face brings with it a massive culture shock.  The Sixth Doctor seemed to show outright disdain for his companion after his regeneration; the Fourth was overcome with a delirium while he recovered from his.  And, of course, the Doctor’s personality has changed much; he’s fluctuated between dignified and clownish, between optimistic and cynical, and between caring and aloof across his life.  He’s massively different from one version to another, and something core to his character in one body could be anathema to his next.  He maintains a moral core: “never cruel or cowardly, never give up, never give in.”  But outside of that, he could be anyone.

Of course, this is a brilliant way to keep a show going for fifty-four years; when one actor is tired of playing the role, simply give the task to another person.  It defines a key aspect of the show: the Doctor is not consistent, in almost any way.  You can’t count on him to be the same the next time you see him.  He’s a man of many faces.

And one of those faces looks a lot like us.

Mad Man in a Box 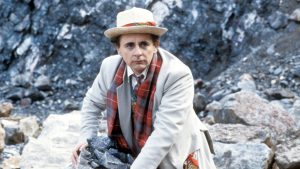 The Doctor is a Time Lord from Gallifrey; an alien with two hearts and amazing skills.  A man who can die over and over again without ever really leaving.  But he looks like a normal human, as observed by those who travel with him, and that’s important.  We’re supposed to identify with him.  We’re supposed to feel pity for him.

When we see ourselves in the Doctor, these are some of the things we relate to.  These truths about us are written on our hearts, because Christ came to save us.

So Much Madder and So Much Better

Far from making us sad, this should give us hope!  The Doctor’s greatest drive is to always be better; the Twelfth Doctor told Clara, “Never be cruel and never be cowardly. And if you ever are, always make amends.”  It’s his greatest goal and dearest hope for himself, and it resonates with us because God has written a desire to be better upon our hearts.

The Doctor pushes us to realize what God has made us for, and what we’re lacking; and in our longing for that, the Last of the Time Lords keeps us good company. 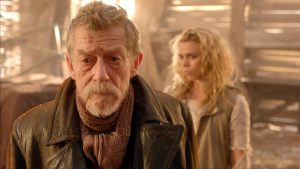 Thanks for reading Redeeming Culture.  Of course, the Doctor doesn’t just reflect us.  Last week, we talked a bit more about how the Doctor reflects and reminds us of who Jesus is, and why the things we love about him are just reflections of the things God wrote on our hearts about Jesus.  We invite you to take a look if you haven’t already.  Allons-y!

Next article Oh! The Horror... | of Deconstructing the Heart of the Slasher Genre