The Top Ten Moments of Doctor Who (in this century)
March 25, 2015 by David Atwell

In a paradox worthy of Gallifrey’s greatest minds, Doctor Who aired its first episode on November 23, 1963…but it turns ten tomorrow.  How could it have had its 50th birthday 16 months ago, but still not be old enough to drive?

Of course, true Whovians will know that when Russell T Davies resurrected the show in 2005, he breathed new life into a long-dead franchise with a rich history, continuing rather than rebooting the beloved classic franchise.  For many of its modern fans, the show (which I consider to be the best sci-fi on TV today) really began when Christopher Eccleston picked up the sonic screwdriver in Rose, which first aired on March 26, 2005.  If you haven’t seen any of the show (it’s on Netflix and is very excellent), I recommend you watch it before reading this article, because in honor of the show’s decennial, Redeeming Culture is proud to present:

Please note, spoilers from the first 7 series abound (through the 9th, 10th and 11th Doctors’ tenures).  Series 8 will remain unspoiled.

In a moment that connected the new Doctor Who series with the old, finally allowing 8th Doctor Paul McGann to have his farewell episode after 17 years and giving the running storyline of the Time War some weighty context, the Doctor shares a heartbreaking moment with a woman he just met before regenerating into the War Doctor, played by John Hurt.  The moment finally answers questions like…who is the War Doctor?  How did the 8th Doctor become the 9th?  Why did the regeneration happen?  The answers to both questions tie the old series to the new with a satisfying finality.

Chasing the mystery of his own death at the hands of a mysterious astronaut-suited figure in Utah, the Eleventh Doctor tracks a clue that leads him to the Oval Office in 1969.  Never one for ceremony or protocol, the Doctor (as Matt Smith) lands the TARDIS mere feet from the President of the United States and takes notes on a shocking phone call that the President has been receiving over and over.  When he is discovered, his madcap antics take us all for a ride.  I’m an American, and even I laughed when River exits the TARDIS and shouts “They’re Americans!” – to which the (very British) Doctor reacts by instantly throwing his hands in the air in surrender.

On a rescued Earth in the far distant future, David Tennant’s Doctor and his companion meet a very old friend with a shocking secret: the Last of the Time Lords is not actually the last.  One of the core driving themes of the Doctor’s first three series (and one of the biggest changes from the classic series) was the fact that The Doctor was the sole survivor of the Great Time War, and with four shocking words, the Face of Boe throws that knowledge into doubt.  Doctor Who is great at keeping us on our toes.

7. The Return of Rose Tyler

After the most tearful of tearful goodbyes powered by a dying star, Rose Tyler was assumed to be lost forever in a parallel universe – one of the few places in existence that the Doctor cannot travel. After hints given throughout the series preceding that she would return, Rose finally makes her appearance in the two-parter that ends series 4. It’s a bittersweet reunion, though – her return is only possible because of the machinations of the Daleks, who seek to destroy all of reality, and saving the Doctor’s universe means sending Rose back to hers.

The Doctor’s most faithful companion is the wondrous ship in which he travels, the TARDIS. So it is only fitting that his “wife” would not be a creature of flesh and blood, but the vessel which has always taken him “where he needed to go.” In this episode, the wonderful being herself becomes a living, breathing, talking human…who wanted to say Hello.

5. The Introduction of River Song

Silence in the Library, Series 4: The Tenth Doctor 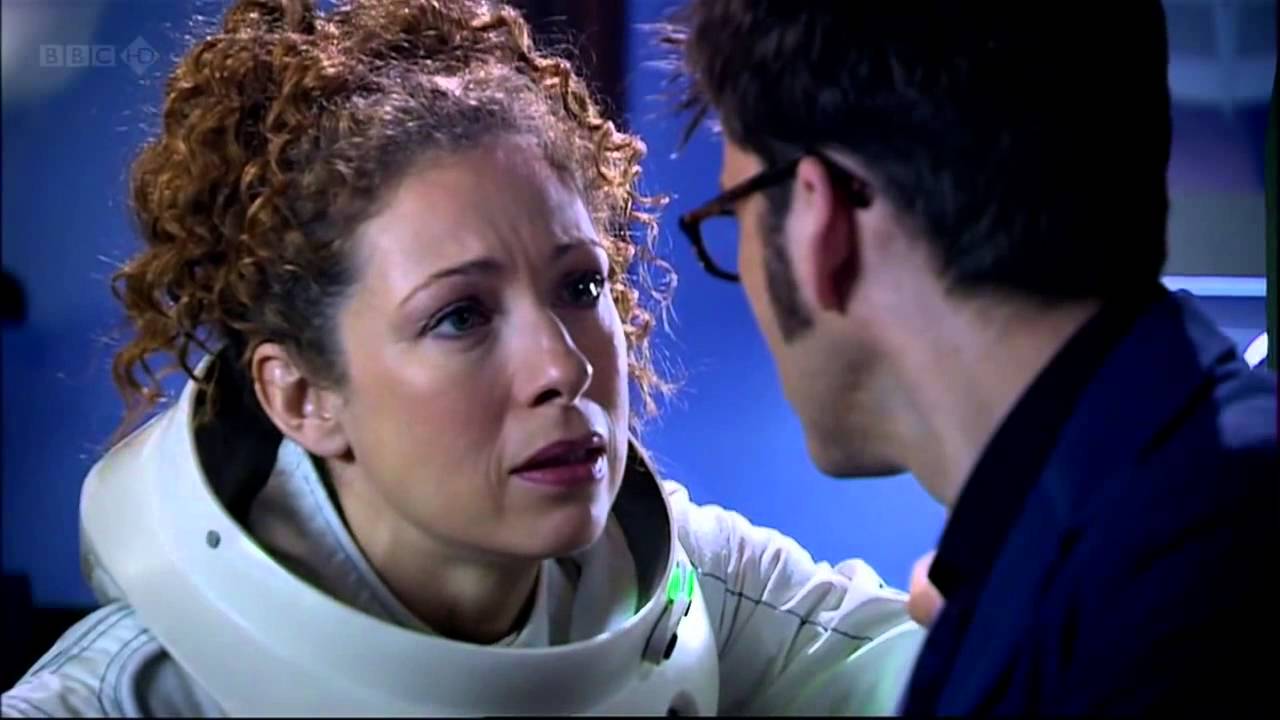 In a truly momentous meeting, The Doctor comes into contact with a woman who knows him better than any other. She calls herself River Song, and she seems confused and hurt when the Doctor doesn’t recognize her. It soon becomes clear that the Doctor and River have known each other for ages, but as they’re both time travelers, keep meeting in the wrong order. This sets the stage for a series-long arc that doesn’t come to fruition until the show changes leadership, and the Doctor saves the universe (at least twice), regenerates, and finds a new companion. I guess when you’re 900 years old you can afford to play the long game.

The series reintroduces the Doctor’s oldest enemy, a creature he long thought wiped out completely. Made of hatred wrapped in a metal case, the Daleks are the polar opposite of the Doctor, and Christopher Eccleston’s perfectly-tuned outburst against the evil being makes clear that he would destroy the tin can with but a thought if he could. This moment is the first time we see the vengeance of a Time Lord, and why the Doctor needs humans traveling with him – to hold him back, to keep him from becoming the evil he detests. It’s also the first time we see that maybe the Doctor hasn’t left the Time War behind the way he thought he has…and maybe the universe hasn’t, either.

In a moment that cements the Doctor’s manic personality, his latent guilt about being the last of his kind, and his overriding desire to help those around him, the Doctor reintroduces himself to the world with a slapdash string of technobabble and weirdness. It was an excellent way to reintroduce and reinvent the character, while developing his story at the same time. This is not the same man that we left in the 1996 film, but he’s also not entirely different.

Widely lauded as one of the best of the new series, Blink manages to encapsulate and explain the premise of Doctor Who better than almost any other episode, despite the fact that The Doctor actually only appears in it for a few minutes at most (the episode was intended to be a “Doctor-light” episode that they could film on the cheap while the production crew worked on the more demanding finale). The Doctor communicates with a woman across 38 years by way of a DVD Easter Egg in a supremely unlikely but delightful dialogue that ends with a heart-pounding warning.

No weapons, no backup, no plan – but he won’t back down. The Eleventh Doctor started his tenure on the show by walking through a montage of defeating the same enemies over and over with the same handicaps – and atop Stonehenge, he taunts them all with the reminder of their previous failures. It’s a moment that distills the Doctor’s personality throughout all of his incarnations: saving the universe in style, without a shot ever being fired.  As Craig Ferguson said of the Doctor, his entire existence is one that proves the triumph of intellect and romance over brute force and cynicism, and the speech he gives to all of his most fearsome enemies drives home his nature with a bang.

All of time and space; everywhere and anywhere; every star that ever was. Where do you want to start?

Of course, there’s so much more that can be said about the Doctor, and some day soon we will.  But for now, let’s just celebrate the phenomenon that is the Doctor.  Happy Birthday, you mad man in a box.  Thank you for saving the world.

Want to celebrate with us?  [amazon text=Every episode of New Doctor Who&asin=B003LQ3YXU] is available on Amazon, and buying them through that or any other link helps support Redeeming Culture at no additional cost to you.  If you already own the series or have Netflix, take a look here to see other ways you can support the site.  Thank you!

You couldn’t decide on a clip for River? I love River! I love River and 11! They were made for each other.
And four minutes of 10 talking about the Weeping Angels had my heart rate up and the adrenaline pumping! I hate the Weeping Angels most of all, I think.
This was a great list – for your first DW Top Ten! Maybe next we could do (we? sorry) the top 10 lines, starting with; “Dinosaurs? On a spaceship!” heehee!

Of course, as a fan of Doctor Who, I loved this. I hope you hear from RC readers who have not watched the Doctor, or who haven’t seen the reboot.

Hey, Dan – what do you think of this?

River has a lot of incredible moments, but I think the most beautiful and heartbreaking is the moment that she realizes that the Doctor doesn’t know her anymore – and that means that this is the last time (from her perspective) that they’ll ever meet. The way she goes from adoring to all business when she realizes that she can’t taunt him with “spoilers…” anymore. That’s why I chose her introduction as the moment.

There will definitely be more Doctor Who content! Don’t worry about that.

Or do you mean the fact that her moment doesn’t have a video? That’s the BBC’s fault, I’m afraid. They don’t have a clip of her up on their YouTube channel, and I don’t want to use a bootleg clip.