This is a Global-Tel link prepaid call from — Adnan Syed — an inmate at a Maryland Correctional facility.

On October 23, 2014, the first episode of Serial was released. Buoyed by its already-successful parent (public radio juggernaut This American Life), Sarah Koenig’s strangely gripping tale of a high school romance gone wrong quickly shot to the top of the iTunes Podcast charts (past even This American Life) and stayed there. Koenig’s subsequent moral wrestling match with herself about Adnan Syed’s guilt or innocence gripped millions. For a medium that has historically been ignored by many, the buzz surrounding Serial was incredible, and it was all based on one question: “Did Adnan kill Hae Min Lee?”

Within just a few weeks, “Don’t tell me what happens in Serial!” became a new mantra for many who couldn’t listen to it as soon as they wanted to. “Do you think Adnan did it?” was a lunchtime discussion. Funny or Die and Saturday Night Live lampooned it. And all of this about a murder that happened nearly sixteen years ago. Just because a reporter named Sarah Koenig decided to tackle this story—not as a story of crime or justice, law or order, but as a personal search for the truth about a horrible event…and one man’s true identity. 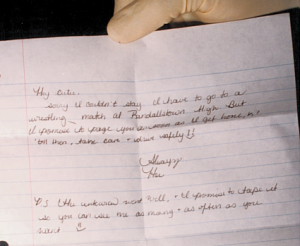 In Episode 1 of Serial, Sarah talks to Rabia Choudry about Adnan. One of the first things she tells Koenig will become a running theme throughout the next twelve episodes: “He was like the community’s golden child,” she says, certain that Adnan has been falsely accused. Later in the episode, Sarah herself echoes the sentiment: “I talk to Adnan regularly, and he just doesn’t seem like a murderer,” she says. And then over and over again, through hours of interviews and recaps, people just keep insisting: “That’s not the Adnan I know.” “He wasn’t a murderer.” “He was a great guy.” From missing witness Asia McClain to Adnan’s high school English teacher, it’s repeated over and over again: The Adnan Syed we know is not a murderer.

On the face of it, this doesn’t seem like much. Killers the world over are often referred to with a confused denial. “He was such a nice boy,” people will say. Or “he wasn’t capable of this.” It’s certainly not conclusive proof. But in this case, the weight of the insistence really serves to build an identity of Adnan Syed, and that identity is not “murderer”.

I was already pretty hooked on Serial by the time episode 6 rolled around, but near the end of the episode, Adnan said something that blew me away.

“To be honest with you, it kinda- I feel like I want to shoot myself, if I hear someone else say, ‘I don’t think he did it cause you’re a nice guy, Adnan’… I would love someone to say, ‘I don’t think that you did it because I looked at the case and it looks kind of flimsy… I think you’re a jerk, you’re selfish, you’re a crazy SOB, you should just stay in there for the rest of your life except that I looked at your case and it looks a little off.'”

Adnan is very clear in this unguarded moment. For the past six episodes people have been talking about how much they appreciated Adnan, how much they liked him, how he was a “good guy.” But in this moment he’s saying “your perception of my identity is irrelevant to me. What I care about is my actual identity.”

He never wavers from his story: he says he didn’t kill Hae Min Lee, and he doesn’t know who did. Whatever his identity is, he says, it isn’t “murderer.” And it is at this moment that the true brilliance of Serial is revealed: it’s a quest for truth, but it’s not really a quest about who is telling the truth. We’re not looking for the identity of the murderer—that is to say, his name—we’re looking for the true identity, the core of a man whose name we know, who was accused and convicted of the murder.

More than a Name

In large part, fans of Serial know most of the names of the important people in the case. Adnan. Jay. Hae. Asia. Nisha. But does this mean we know their identity?

I doubt it. In listening to Koenig’s quest for Adnan’s identity, I began to think about my own. Am I a murderer? Is my identity “liar” or “thief”, or “husband” or “father”? Think about your identity. Is it any of those things? Can you even sum it up in a single word?

My musings have led me to a much darker place than just the murder of a high school student: my identity could actually be described by all of those words, and many even worse. It’s pretty clear: if you lie, you’re a liar. If you steal, you’re a thief. The Bible takes it a step further: if you lust, you’re a cheater. If you hate, you’re a murderer. Because that’s the nature within your heart; you’re capable of it. It’s who you are. And it gives us a simple word to define our identity: sinner.

At the very least, it’s who you were.

Like Adnan, though, I don’t think my perceived identity matters. What truly makes a difference is my real identity, because that’s what decides how I live. And with as much bad news as the Bible gives, it also gives some incredibly good news: that is who you were, not who you are.

First, it says, you had a bad identity – but that’s where God met you. “While we were still sinners,” Romans 5:8 says, “Christ died for us-” a death that gave us a new identity.  We are no longer slaves to that old identity, but sons- heirs to the Kingdom, in fact! “An heir through God,” Galatians 4:7 says. “For our sake he made him to be sin who knew no sin, so that in him we might become the righteousness of God.” (2 Corinthians 5:21) We’ve traded our sinful identity for a new one: righteous. Son.

The verdict is in. Our identity is secure. And now no one can accuse us again.

Want to pick up something on Amazon? Serial has an awesome red [amazon text=notebook&asin=B00RM000K6] that you can pick up, and buying it (or anything else) through our Amazon link helps support Redeeming Culture at no additional cost to you. Thank you!