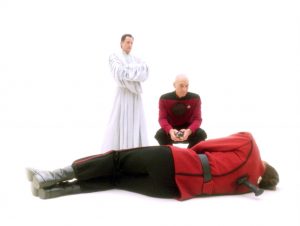 Writer Ron Moore also said that Season 6 was when the show was at its best. His colleague, Naren Shankar said, “Probably season six was the best year of the show. We could all feel it. There was like this run of really great storybreaks that we had towards the second half of season six. Everything was clicking, and the stories were interesting, and different, and cool.”

This is especially impressive coming so late in the game. Rick Berman talked about the difficulty with being original at this point, “After 126 episodes, we’ve written probably 140 scripts. Those have come from about 300 stories, gleaned from nearly 5,000 story pitches. After a while, for someone to come in and pitch a story that is not one of those 5,000 that have ever been used or rejected is very tough.” He added that, “Shows, when they get into the sixth season, can get a little dicey in terms of the actors. The actors can start getting a little sloppy, a little bored, a little temperamental and none of that’s happened. If you look at these actors, who have worked together for six years, I think they get along better with each other and with the production crew than on any other television show I’ve ever heard of after that many years.”

Said Jonathan Frakes, “We’ve had some dogs, as we always do, but I think the quality of the show is better and I think the consistency and the ease with which we all work together has never been better. That has a lot to do with the solidity of the writing staff.” 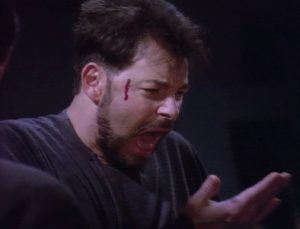 In general, the cast credited the writers, who seemed to have proven Berman wrong on his odds. By the end of season five, some of the cast really were tiring of their roles, but the creativity they saw in this year’s scripts revitalized them. “I think we’ve done more good shows and more interesting, exciting shows,” Frakes continued.

Brent Spiner, who had also been somewhat critical of fifth season, also credited the solid writing team. “They’re not defensive. They really want to hear what you have to say. I found myself calling them to say ‘great work’ more often than I usually do because it really was.”

After the fifth season, Michael Piller was replaced as the showrunner on The Next Generation by Jeri Taylor, so Piller could run Deep Space Nine. Once again, the season started with too few stories in the pipeline. “I looked at the script status report and thought, ‘how will we ever do 26 shows?’” she said. “We had four ideas. Beyond that was an abyss.” Taylor was tense about the lack of scripts and said, “I didn’t stop feeling that way until ‘Descent’ [the final sixth season show] was on stage. But I learned to roll with it and realize the staff was really coming through. Ron [Moore] and Brannon [Braga] grew this year immeasurably as writers, and [served] as my right-hand people. René [Echevarria] has developed steadily to become just as much of a heavy hitter, which has been really gratifying for me to see. Naren is more of a newcomer and hasn’t been here the whole season, but shows enormous promise. These four guys are absolutely wonderful.” 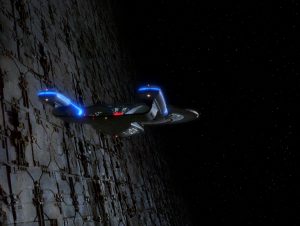 Rene Echevarria’s scripts were more romantic, and Naren Shankar’s were more hard sci-fi. Said Taylor, “They are brilliant, contentious, creative people who keep me hopping. It’s a very exciting thing to be in a room with all of them when ideas and arguments are bouncing around. It gets very heated at times, but we come up with some very, very unusual stories because it’s a free room. Dissent is allowed and encouraged. From that I think we hammer out scripts that you could never get to by taking the safe, formulaic approach.”

Brannon Braga was even happier under Taylor than he was with Piller, of whom he thought the world: “Mike was brisk and had a vision of the show to guide us through it. In the end, I find our break sessions now a little more rewarding. We discuss things more philosophically.”

Noted Shankar, “Jeri Taylor, bless her heart, always lets us argue, but she’ll always be the one in the end who says, ‘Okay, it’s this way.’ But she does that as a last resort. She gives us very free rein.”

In truth, they did not get to do every wild thing they thought of. At one point the writers had wanted to bring back Riker’s transporter clone, Thomas Riker, and actually kill off Will. They would have Tom take his place on the ship, the Riker who was still in love with Troi. Rick Berman quashed the idea. Echevarria said, “In the writer’s room it sounded like the greatest idea of all time, and Rick was like, ‘Guys, you can’t just throw out a beloved character for this one shocking moment, and press the reset button because you think it’s gonna be cool.” Looking back, he was glad Berman said no. 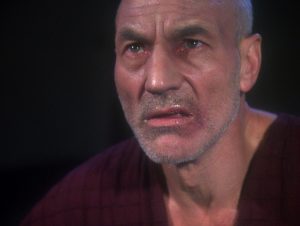 Jonathan Frakes noted of the sixth season’s long and much-desired injection of interpersonal conflict, “We’ve been fighting for it since we’ve gotten on the show. It’s the essence of drama, and since Gene’s passing, Rick [Berman] and Michael [Piller] have allowed a little more of it to sneak through. One of the basic qualities of Deep Space Nine is the conflict they have, and I think it works very well. I don’t think we sacrifice anything by having conﬂict. I think it’s human and I’m thrilled.” Deep Space Nine had started airing midway through season six, with opportunities for conflict designed into the show from the start. 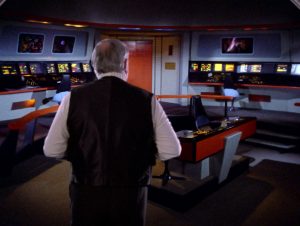 As for notable episodes, season six brought back the third original series cast member into The Next Generation’s realm, James Doohan as Scotty, in the episode “Relics.” With the effects-heavy Dyson Sphere already in place, recreating the original Enterprise bridge (for what was one of the episode’s most poignant scenes) became cost prohibitive; but everybody wanted it to happen, so the whole production team pulled together, doing extra, and it did happen.

Ron Moore loved the episode “Ship In A Bottle,” possibly his favorite of the year; but wishes they could have taken another look at “Aquiel,” which was a riff on the classic film noir, Laura. He called it a misfire. Another possible mistake was “The Perfect Mate,” some complaints about which irritated Michael Piler. “I ﬁnd it fascinating that people really idealize Gene’s universe, but as soon as an alien comes out of the pod that isn’t politically correct, that is not like what they would like women to be, they reject the entire philosophy of Star Trek. That philosophy is that there is room for all kinds of people and beings in the universe. They may not be what you would like them to be, but they exist, and we have to learn how to co-exist with them. I’m not saying, by writing an episode, that a woman who metamorphoses to become the perfect mate for every man is an ideal woman any more than I’m saying a violent Klingon is a model citizen. There are violent people, there are women like this, and there are men who like women like this. All we are doing is playing with all of the things that are available for us to play with in a story universe.”

As season six ended, the plan was for the seventh year to be the last for the series, and to move this crew into the cinemas to pick up the film series, which had finished for the original crew with Star Trek VI almost two years earlier. It would begin shooting almost immediately after finishing off the series. The decision was made to have two scripts written for the film, with the best of the two chosen for production. Ron Moore and Brannon Braga were chosen to write one, and Michael Piller was asked to submit another. He declined. “It was extremely uncomfortable, after what I’ve been doing here, to suddenly be in a competitive situation with another writer, in a horse race for the ﬁrst position on the ﬁrst movie. Some writers thrive on competition—I don’t. I spent a great deal of the last three years trying to reduce the competition that plagued this show’s ﬁrst two seasons.”

It’s a decision I admire.

Next article The Tapestry of Star Trek: TNG Part 4