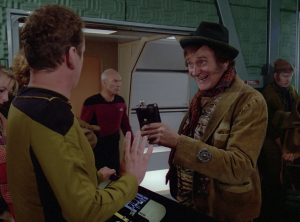 The second season laid some wonderful groundwork, but it had its duds too. “Up the Long Ladder” featured horrible Irish stereotyping portrayed as inherently comical. “The Outrageous Okona” may be solely responsible for killing off the “Charming Rogue” character archetype, by making his devil-may-care approach to life read as insufferably smug. “The Dauphin” was a “Wesley’s First Love” tale marred by the silly way it handled the shape-shifter concept. “Manhunt” took the original series’ “Amok Time” premise of a character in heat and stripped it of the dignity which made that episode fly, replacing it with The Outrageous Lwaxana, Troi’s wacky mom; who proves that The Office’s humor of discomfort really does require skill. The season premiere episode, “The Child,” seems to register as overwrought; and then there is the episode which is easily considered the worst of the season, the series, and possibly any Star Trek series: the clip show, “Shades of Gray”.

There continued to be rancorous issues with writers, as well. Tracy Tormé had been promoted from writer to executive story editor for season two, and would leave at the end of it. He didn’t like the overlord quality that characterized rewrites. His episode, “The Royale,” was a primary example. He explained about his astronaut character, “l was told that character had to be written out because it was too good a part for a guest star. 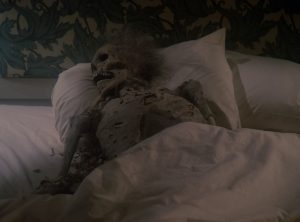 Things work best, they said, when it’s Picard and Riker, so get rid of him and make it a skeleton in a bed and give all his lines to all our people. I had been working on this story with him as the main character for two years. It had been greenlighted, and now, one week away from production, I’m told to take him out and start all over again. This was typical of the leadership second season.”

On a perpetual theme for the series, lack of main character conflict, he said: “…it would do nothing but help us to have some kind of internal conflict once in a while on this show. And that’s something that everyone agrees on, but every time I try to put it in there, it’s instantly taken out by the powers that be… 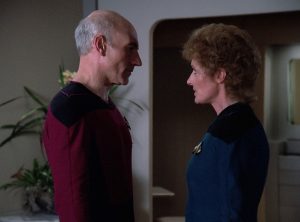 I had a scene near the beginning where there’s an abrasiveness between Picard and the new doctor, Pulaski; where they’re not really arguing, but are at odds over an issue, and that was instantly taken out. When I asked why, I was told, ‘We already had conflict with her and it has been resolved, and it’s over for the season.’ Unfortunately, there’s an atmosphere of ‘We can’t do this and we can’t do that and we better not do this and, uh oh, what would happen if we did that,’ instead of what it should be which is ‘Hey, we have a big success on our hands, we have a loyal audience no matter what we do, so let’s take some chances and do some creative things.’ That’s what I wish the attitude was.”

In addition to Tormé and other writers, 6 writer/producers left the show by season’s end. Maurice Hurley also left. He found the series’ second season “for the most part, mediocre. We had a lot of things we wanted to do, like to move a character from one point at the beginning of the season to another at the end of the season, and one of the problems with STAR TREK is the characters never change. If you look at the old series, they go through all these incredible adventures and they are still the same characters at the beginning that they are at the end. That’s not the way life is. I wanted to arc the characters through the second season, but we didn’t have the time to build the foundation. That was disappointing.”

Executive producer Rick Berman also discouraged by how the Writers’ strike had affected the year. “We did four episodes less than we had wanted, and the 22 that we did do were very rushed. Obviously, that was a problem. …The quality of the first several episodes suffered in that we did not have the time that we would have liked to develop and polish the early scripts.” 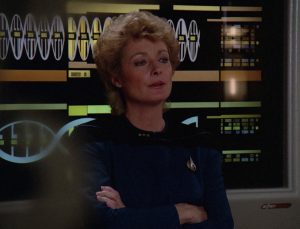 Another loss suffered due to poor development was the character of Dr. Pulaski. Melinda Snodgrass pointed out that “She had harder edges. She wasn’t quite as supine as a lot of the other women were.” When the writers were ordered to defang her, she was often just given techno-babble rather than real dialogue. I found her a refreshing addition to the crew, despite the apparent uncertainty about how to use her. She challenged the assumed right things this crew spouted so easily, so people had to explain their thinking. Things explained are always more compelling than things assumed. The producers really blew it with her.

Nevertheless, Rick Berman remained ambivalent about the character. “She didn’t really work too well. There were a lot of fans who didn’t like the fact that Gates had been let go… and I think the reason that was told to the public was one of those kind of classy, ‘She’s going off to pursue other endeavors’… at the end of the second season, Hurley had left the show, and I didn’t feel that Muldaur was working, so the question was, do I pick a third doctor? Do we have three doctors in three seasons, or do I bring Gates back? And I decided it would be healthier for everybody involved to bring Gates back.”

…if you extract the precious from the worthless, You will become My spokesman…
Jeremiah 15:19b (of a-c) 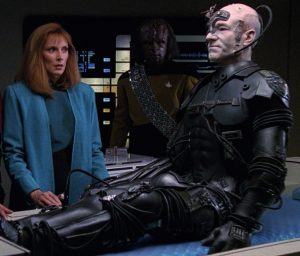 Among the products of humanity, things are rarely all good; but they are also not often entirely awful. Diana Muldaur was let go, but her departure was mutual. She didn’t want to be renewed either. This is almost no one’s favorite season of The Next Generation, yet its high points are some of the entire series’ high points. Maurice Hurley was the man who fired Gates McFadden, yet he created the Borg. Even Tracy Tormé, who was generally pretty down on things, also said quite candidly, “Gene Roddenberry has been very, very kind to me personally and has shown real interest in my work, and I’m grateful for that. STAR TREK was very good to me. l have a lot of great memories and I liked the opportunity it gave me. I’m not going to lie about it.”

Ten million people watched the show every week, and not all were science fiction fans. People connected for many reasons. Some saw things in TNG that hadn’t even been put there deliberately. Sure, they had cast an actual deaf actor to play a deaf role; but it also came out that Data was being seen as a representative of people with Asperger’s Syndrome. It was unplanned, unwitting and unintended, but it could be read that way, and helped many people feel normalized.

This was exactly the kind of thing that made Rick Berman most value the show;

“If you were to ask me what element of the 18 years that I produced Star Trek was the most rewarding for me, it would be the continual contact with people who would say how important that one hour of television was every week for them: Fathers and mothers who would come and talk about how their kids would sit with them, they would watch Star Trek every week, and then they would turn the TV off and discuss it; People who would talk about how Star Trek got them into the aerospace industry; people who would talk about how Star Trek gave them hope for the future. If you were producing Cheers or Family Ties, you weren’t running into people that had such a strong reaction, and such a meaningful relationship with a television show as the fans of Star Trek had.”

Next article A Review of mother!, or How I Learned to Stop Being Dubious and Write Something about This Film