…he who hurries his footsteps errs.
Proverbs 19:2b

For a few years, producing the episodes was generally done in a surprising rush, for almost all departments. The schedule called for 10 months a year, and 12-15 hours a day, resulting in roughly 6 finished minutes a day. 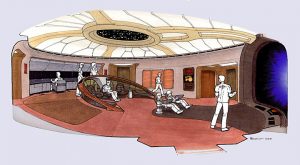 David Carson, who was with the special effects house ILM when the series started, explained that normally a production team would get effects plans and set designs three to four months ahead of shooting; but for TNG, those often came in as late as a week before shooting began. The big problem with this was that The Next Generation was going to be judged, visually, against the only science fiction being produced: major motion pictures.

Encounter at Farpoint had 250 SPFX shots, which at the time was actually about as many as two feature films; but it still had to be done with a fraction of the time and budget.  The producers told the effects team that a lot of the elements of those shots would be cannibalized for future episodes, but that didn’t happen.  Visual effects coordinator Robert Legato said,

“‘Last Outpost’ had more than 100 FX shots in it. All diverse problems: the Wizard of Oz head, the wispy things, the three-dimensional holograph display and tons of blue screen shots; we had to design and build the Ferengi ship and shoot it and figure out the Ferengi whips and shoot them. Then, we had ‘Where None Have Gone Before [sic],’ which kept us moving at an unbelievable speed.

The effects team was overwhelmed.”

Legato had to be on set, supervise the photography of miniatures, supervise the compositing of elements into finished shots, attend meetings, and budget the effects.

“For the writers and producers, you see, a script is a wish list. For us, it’s a list of problems that have to be solved. If all it says is this is a creature that can do anything, there’s no guide to tell you what it looks like. What does 10 times the speed of light look like? It’s not something you can put your finger on. It’s not a concrete thing. In the episode ‘We’ll Always Have Paris,’ the script wasn’t ready on time and we had 15 minutes to figure out what time distortion looks like. I get a big kick out of the fans who send letters and come up with reasons why things on the show look the way they do. You get letters from people telling you how brilliant this concept is because of the structural dynamics and design and air flow. In reality, you just thought it was a neat idea and it’s the best you could come up with on the spur of the moment.” 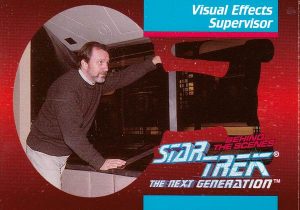 By the 12th episode, Dan Curry was brought in as an additional effects supervisor, and he and Legato’s teams would alternate work on every other episode. The effects burden also eventually leveled out to 40 to 70 shots per episode.


These kinds of backups had started right from the get-go, though. When regular episodes began shooting on Monday, July 6th, only two or three scripts were ready for production. Later, in the middle of the season, episode director Rob Bowman was given an emergency with the episode “Heart of Glory,” which had been written in only two days; apparently, The Next Generation had run out of scripts to shoot. 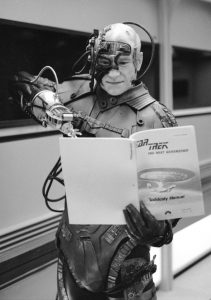 “We’re lucky if we get our scripts a week in advance, and then that script has to wait because we’re still shooting the last episode. Everything is done fast around here,” said Gates McFadden.

Denise Crosby backed this up. “There is also the matter of working 12 to 16 hour days to turn out an episode every five days, and then waking up on the sixth day to find a new script that has to be digested by Monday. The real acting challenge for myself has been to try and keep the character I’m playing fresh under those kinds of conditions.”

Marina Sirtis cited issues stemming from the quick turnaround in the writers’ room, “We’ve had many changes of writers. They can’t write for characters unless they know the characters well. Writers can write plots if they don’t know the characters, [but] then the characters just start commenting on what’s happening. In some scripts, anybody could have said certain lines. It didn’t matter. Lines didn’t go with characters.”

LeVar Burton said, “There was a real uncomfortable dynamic that existed between what was going on on stage and what was happening in the offices… we always felt that they didn’t have a clear sense of what it was like being on the stage because they were never freakin’ there. And we certainly didn’t have any understanding of what it was like writing for the show because none of us had that sort of experience at all.”

Asked for his least-favorite episode in the entire series, writer Brannon Braga cited the very third one: the racist episode Code of Honor. “I remember watching when it first aired, thinking ‘I’m not gonna watch this show anymore.'” In their 25th anniversary reunion interview, the cast groaned about the sexist episode, Angel One. 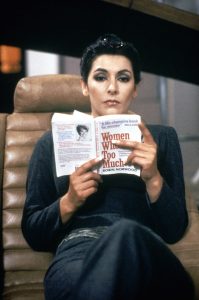 The cast all thought, ‘Oh my God, this is so sexist.’ Stewart was willing to approach the studio on the issue and get some changes made, which gave him some credibility among them. “One of my personal battles, in the first season, was about elements of sexism in the scripts. I thought that the women’s roles were stereotypical and not thought through, and that they were fulfilling a kind of archetypal ‘female television role,’ the token dark haired one, the token, in our case, redhead, the token blonde, with Denise.”

In an interview done early in the show’s first year, Denise Crosby said, “At this point, it’s still a struggle for the women in this show to make sure we’re not left out. Unfortunately, that sort of thing happens when you have 1980s minds attempting to write a show about the far future.” Crosby offered. “But I don’t want to give the impression that I’m constantly at odds with the show. Star Trek this time around is series that’s trying to get on its feet. It’s difficult to write for this big a cast and have everybody’s part be great all the time.”

That was a real problem for Crosby, and it would lead to one of the most notorious episodes of the entire series.

Next article Trektember TNG - #13: The Drumhead

Angel One must be bad. After reading the synopsis on IMBD and watching the tv trailer, I still don’t remember it.

To be honest, I’ve seen the episode recently and I don’t even remember it.

God gave us a sideways seeming gift. Repressed memories. They spare us from certain traumas.