Trek Backstory, part 1: Before The Next Generation
September 2, 2017 by W. David Lichty

“People have the wrong idea about science fiction. Everybody thinks it’s like a subset. It’s a superset. It’s like you can do a medical show, a lawyer show, a cop show, a doctor show, and it’s actually a broader canvas.”
– Writer Naren Shankar, Star Trek: The Next Generation, Inside the Writer’s Room (Blu-ray Season 3, Disc 6)

“This fundamentally optimistic vision of what the future holds is SO unique really, when you think about it in science fiction. Science fiction is primarily distopian…”
– Writer Rene Echevarria, “Requiem: A Remembrance of Star Trek The Next Generation (Blu-ray – Season 5 Disc 6)” 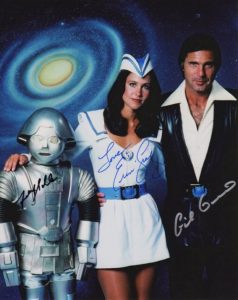 Even in their heydays, well regarded programs like The Outer Limits and The Twilight Zone were not very big hits, but once the 60’s and Star Trek had both ended, so had successful televised science fiction in America for quite some time. In fact, one of the few superior entries to follow was the animated return of Star Trek, which ran Saturday mornings at 10:30am; otherwise, the 70’s gave us things like the short lived movie spinoffs of Planet of the Apes and Logan’s Run, in addition to the short-lived Battlestar Galactica and Buck Rogers, which were born out of the post-Star Wars boom. The 80’s saw quick failures like Salvage One and Misfits of Science, and a critically admired (but not ratings successful) reboot of The Twilight Zone. Sci-fi could work in movie theaters, but generally did not go well on television.

In the early 70’s, Star Trek began re-running daily in syndication, and built up a cult following with a save-the-show element. The Star Trek conventions came about in part to foster that goal, and midway through the 70’s, Paramount Studios considered starting up a new, fourth television network, with Star Trek: Phase II as the headline show, to feature the original crew minus Spock, and possibly with Shatner’s Kirk to be written out after a few episodes. Episodes were written, sets were built, and test footage was even shot. That’s how close it came to happening. Ultimately, this series was turned into Star Trek: The Motion Picture, which didn’t satisfy enough Star Trek fans to quell the ongoing calls for more. The call did quiet down after The Wrath of Khan fared better, as did the two follow-up films. By 1986, Star Trek fans knew that they could reliably expect to see a well-produced, usually pretty satisfying, feature film about once every two years.

A brother wronged is more unyielding than a fortified city; disputes are like the barred gates of a citadel.
– Proverbs 18:19

Meanwhile, Paramount had been trying for years to get Gene Roddenberry to agree to do a new Star Trek series, but he had felt pretty well screwed over on the first series by the television network. He was being paid well to be the executive consultant on the films, and that was good enough for him. He really didn’t want to do a new Star Trek series. He wanted to retire.

On the other hand, after a decade of his own failed series pilots he was no longer trusted to bring the magic. It sounds like a mismatch made in heaven, but he was very famously the show’s creator; and if any kind of Star Trek was going to be acceptable, Paramount needed him aboard. Eventually, a contentious meeting ended with Gene angrily agreeing to head a new Star Trek series, in exchange for a very hefty compensation package.

So, on October 10, 1986, to the surprise of almost everybody, Paramount Pictures publicly announced that a new Star Trek series was finally going to be a reality. They had no concept, no designs, no stories, no cast, no crew; only the decision to start airing it by the following September, less than a year away.

Despite having said for years that he would never produce another television series, Roddenberry was set to executive produce, enticed by the lack of network involvement. For financial reasons, and to maintain control, Paramount had decided to produce The Next Generation themselves, and to sell the show to individual television stations across the country, rather than to partner with a major television network. This would mean far fewer battles with network censors, and that was enough to push him over the line and agree to head the show.

“There are so many things in the world that upset me, and this series gives me the chance to comment on them.” Roddenberry said.

Next article Trektember TNG - #3: The Measure of a Man

I remember watching “Salvage One!” Andy Griffith building spaceships out of trash, right? It had a great theme tune, as I recall.

One other short-lived but actually pretty good 80s sci-fi TV show was “Probe.” I think it was created by Isaac Asimov – he was involved to some extent. It was present-day, Earth-based sf, with a scientist solving mysteries thanks to technology and clear thinking. Nothing too dramatic, but I saw some episodes on the (then) Sci-Fi Channel a decade or so ago, and it held up fairly well.

Looking forward to the rest of your backstory miniseries!

Yes, Salvage 1 did have a nice theme, sort of circusy, if I recall, and you remember it aright. It was about as sci-fi as The Six Million Dollar Man, though. Where that one operated on basic 70’s TV intrigue, Salvage 1 lived on 80’s TV charm, which it certainly had. Neither did too much with their sci-fi elements, but they were still good for what they were.

Fortunately, the Brits were still doing thoughtful stuff like Blake’s 7 and Doctor Who, but that didn’t make it across the pond everywhere, not back in TNG’s starting days. I’ll look into probe! Thank you!