In 1931, though no one knew it at the time, Universal Pictures launched the first modern shared universe.

Theirs wasn’t populated by superheroes, though.  Dracula and Frankenstein were the one-two punch of monsters in 1931; following them up for the next quarter-century were entwined stories across over forty films like The Mummy, The Invisible Man, The Creature from the Black Lagoon, and The Wolf Man.  It made household names of such classic actors as Lon Chaney, Bela Lugosi, and Boris Karloff.  The Universal Monsters shared universe was a powerhouse of horror storytelling.

And it certainly made a splash.  Not to mention lots of money for Universal.

About fifty years after the monsters got their last scream, the Marvel Cinematic Universe of Iron Man and Captain America began making headlines; and now everybody wants one. The DC Extended Universe‘s latest entry, Wonder Woman, comes out this weekend.  Star Wars is getting into the game with its Anthology films, Harry Potter is dipping its toe in the water with Fantastic Beasts, and to bring the whole story full-circle, Universal itself is rebooting its Monsters shared universe as “Dark Universe,” kicking off this summer with a new, gender-swapped version of The Mummy.

Shared universes are big business now, giving theater-goers the sense of canon, contact, and consequence that they long for.  Because the truth is, every human lives a different story in one big, complicated shared universe – one with seven billion concurrent, interwoven storylines.  Talk about crossover potential.

We long for Canon 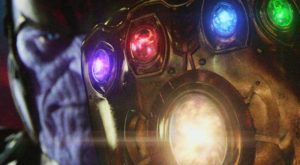 Shared universes provide a convenient way to maintain canon across stories by providing a common frame of reference for all of them; all the stories are written in the same setting, with similar themes, so you can be sure of the rules.  Infinity stones are objects of unbelievable power in the Marvel universe, for instance; and the Dark Side of the Force makes people do things in cruel and selfish ways in Star Wars.

The world we live in has some pretty well-established rules, too: obviously there’s mathematics and weight and planets up in the sky. But there are other things it seems like you can’t really count on.  We call it luck, or human nature, or whatever.

It gets frustrating when stories don’t line up right, or when the premise keeps changing on us.  Like when a story abandons its previous canon, or retcons a character out of existence.  At best, it’s distracting, like when Darrin was replaced in Bewitched; but at worst, it’s totally disorienting.

When it happens in a story, we get pulled out of it; it weakens the narrative.  When we lose a grasp on the story, it’s no longer doing what it was meant to do.

When we lose our grip on real-world canon, it wrecks our life.

That real-world canon takes the form of the laws of nature and the word of God; they allow us to count on some solid truths about the rules of the world we live in, and that the Author of the story has it all together.  That He will be faithful to finish our story, and to make it a good one.  With His canon, we have a touchstone we can return to; a way for us to trust in our future.

And we don’t just do this on our own; the Author’s canon applies to everyone.

We long for Crossovers 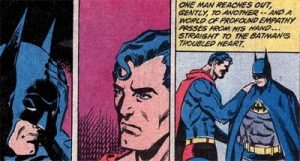 There’s nothing quite like a good crossover event in shared universes; it’s a moment of “appointment TV” or a must-buy bestseller book.  We get to see unique, disparate, beloved characters interact in a way that they don’t get to in their own films or books.  A lot of times, the main characters in a crossover can really only relate to one another; Superman and Batman (in the comics, at least) are a great example.  Best friends with secret identities, they can interact in crossovers in ways that they can’t interact with, say, Jimmy Olsen.

We long for a crossover so we can connect with, experience incredible events with, and fight alongside other people.

Do you ever feel alone?  It’s normal to feel like you need a major crossover event in your life; it’s a glimpse the shared universe can give us, and an opportunity we can truly experience as we form friendships with one another.

True contact isn’t just being friendly.  Like in a crossover, we want to truly know and be known by another; we want to have shared experiences, from films to moving sightseeing trips; and we want to fight together – for something that really matters.

We long for Consequence

Shared universes are great at ratcheting up the tension so that everyone’s life and well-being is on the line.  There’s no doubt that the actions of one person will affect the other people who share their storyline.  We know that Newt Scamander’s actions in Fantastic Beasts will directly affect Harry Potter.  There’s a sense of impending consequence around actions in a shared universe; one can always find something to fight for; something that matters.  Even if it’s just the life of a friend. 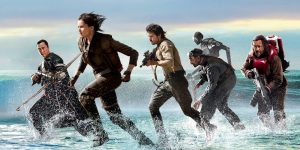 You don’t have to settle for mediocre, lackluster purpose, either.  The real world – the shared universe we all occupy – is full of consequence; it motivates us, binds us together, gives us a goal and a destination that everyone around you can buy into.  And for the believer, that purpose is even greater – even more worthwhile.  Even more difficult.

Just like in shared universes, sometimes that purpose is the lives of those you’re fighting alongside.  And sometimes it’s the fate of the universe.

Learn about the canon.  Find your crossover.  Do something of consequence. Because your shared universe includes all of us.

Shared universes are uniquely tuned to show heroes saving the world; they’re almost begging to show superheroes and derring-do.  But you don’t get left out just because you aren’t Tony Stark.  You get to save the world by showing it that its true purpose is the pursuit of the God who is adventure incarnate; the Lord whose end you can never reach!  And you get to do this in a grand crossover with others, backed by the canon of a God who is writing your story spectacularly.

It’s the greatest adventure possible; don’t miss the heart-pounding action of your life. Learn about the canon.  Find your crossover.  Do something of consequence. Because your shared universe includes all of us.

Thanks for reading Redeeming Culture! Let us know in the comment section what you think of the shared universes. Did we miss something?

Next article #135 - Alien: Covenant and Standing in for God