Just before midnight yesterday morning, the spacecraft Juno entered its orbit of Jupiter after a 1,740 million mile journey that began almost five years ago.  The probe is designed to research the tempestuous atmosphere of the planet, and to learn what it can about the core beneath the world.  It’s not the first man-made object to orbit Jupiter, but it is certainly an impressive milestone for NASA and its mission to explore the cosmos.

It’s no secret that I’m a huge fan of space exploration; over a year ago, I wrote an article about how I thought that heaven might be a little bit like Star Trek, as we explore God’s creation with God Himself.  I’ve been a fan of NASA for as long as I can remember.

Still, Juno’s mission (and NASA’s mandate in general) has some Christians puzzled or nonplussed.  Space exploration, some believers say, is a waste of time in a world that Christ will return to soon.  Bolstered by a mistrust in the institution of science as a whole for the perceived slight that is evolution, Christians pooh-pooh the accomplishments of scientists and the research that they do.

Nuts to that.  Christians should be more than just okay with space exploration; in fact, we should be enthusiastic supporters of the endeavor!

God didn’t only make the Earth and its inhabitants for His glory; no, David says, “The heavens declare the glory of God, and the sky above proclaims his handiwork.” (Psalm 19:1, ESV)  This is a favorite verse of mine; it goes far beyond just admiration and demands that we appreciate what the heavens and sky have to say.  Now, the Bible isn’t silent about space, but it is quiet; and so, if we are to learn how the heavens declare God’s glory, we’re going to have to listen.

“I do not feel obliged to believe that the same God who has endowed us with senses, reason, and intellect has intended us to forgo their use and, by some other means, to give us knowledge which we can attain by them.”

Galileo Galilei, the famous 17th Century Italian astronomer, “father of modern physics,” and discoverer of Jupiter’s moons, came to this conclusion when he said, “I do not feel obliged to believe that the same God who has endowed us with senses, reason, and intellect has intended us to forgo their use and, by some other means, to give us knowledge which we can attain by them.”  That is to say, God’s grace has given us the Bible by which we can learn about Him, but He has also given us eyes and minds to explore the world that  He has made.

Galileo was a revolutionary in his time for writing this; the Catholic church called him a heretic for affirming the Heliocentric Model of the Solar System as presented by Nicolas Copernicus, and in the rebuttals he made to the church, he continuously insisted that Christendom had nothing to fear from science.

Rather, far from opposing God, science glorifies Him by investigating and allowing us to marvel all the more at what He has made!  Like any other God-glorifying activity, it can be sinful – but the institution of science merely reports what God has done in making the universe.  What we do with that knowledge is up to us.

The heavens declare the glory of God – so should we not listen?

Sadly, instead of listening, we – that is, humans, Christian and non-Christian alike – spend a lot of time looking around.  It’s a sad fact, and somewhat ridiculous when we recognize the scale of the universe that we’re ignoring. 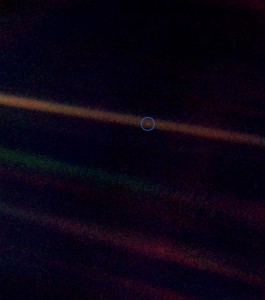 And the scope is immense.  Carl Sagan, famous agnostic, science communicator, and astronomer, convinced NASA to risk Voyager I‘s only camera in a bid to capture one last photo of the planet Earth.  Taken from a distance of 3.7 billion miles, our planet appears smaller than a single, pale-blue pixel.  “Consider again that dot,” Sagan said.  “That’s here. That’s home. That’s us. On it everyone you love, everyone you know, everyone you ever heard of, every human being who ever was, lived out their lives.” We all live, he noted, “on a mote of dust suspended in a sunbeam.”

And as large as the universe around our little mote of dust is, our God is even bigger.

In the face of that scale, our earthly concerns are rather petty.  We don’t pay much attention to the bigger world around us, rarely considering the fact that the universe is bigger than the day-to-day concerns that we struggle with every day.

So many people – even believers – want so badly to be a part of something larger than themselves, they take up causes and habits they think will fill the massive holes in their hearts.  This is Biblical; we were made for more than just this pale blue dot.  We were made to love and be loved by the God of the universe.  And perhaps if we looked up more often, we might see that more clearly.

Peering Through the Clouds

This morning, the spacecraft Juno is whirling around Jupiter at a breakneck pace, peering down through the storms of the gas giant to discover more about its inner workings.  Juno was named after the Greek goddess and wife of Jupiter, who was said to be able to look through the clouds of chaos that Jupiter surrounded himself with and see his true being.

Let us love God by investigating Him, and His creation, more closely – by looking up and listening to the songs of glorification that the heavens sing.

We don’t have a God of chaos, but of order.  And He has not shrouded Himself in mystery, He has revealed Himself through His word.  But the loving gaze of Juno should inspire us: let us love God by investigating Him, and His creation, more closely – by looking up and listening to the songs of glorification that the heavens sing.

And let us marvel at who He is.

Thank you for reading Redeeming Culture, and thank you for marveling with us at God’s creation!