Free Will and the Adjustment Bureau
February 10, 2016 by David Atwell

Please note that this review of the 2011 film The Adjustment Bureau does contain spoilers.

When was the last time you made a choice?

I don’t mean whether to eat the last cookie or stay awake for another hour watching Netflix.  I mean a big choice.  Going to school, taking a job, getting married, buying a house, having children, not having children…when was the last time you made a big choice?

And was it really your choice to make?

The 2011 film The Adjustment Bureau answers that question with an emphatic no.  For David Norris and Elise Sellas, a plan has been laid out with clear paths that do not converge.  When David sees it, he’s furious – and driven to win his free will at all costs.  A quest whose cost just might be his life.

“The Plan is wrong!” 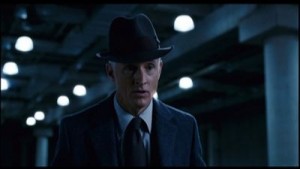 When Norris first meets Richardson in person, he discovers that the choices and decisions he’s been making all of his life have been controlled and adjusted.  Their plan has placed him on a deterministic path that ends the way they want it to, and he’s unable to choose anything that would lead him away from that path.

The path is not paved with large adjustments.  It’s paved with small ones.  Being chased by security officers, spilling his coffee, missing the bus.  Norris hasn’t noticed, but he’s been unable to choose for himself because options have been taken away from him all of his life.

This should sound familiar.  You’re on a similar path, whether you know it or not.

Since we were born, our lives were governed by a power that keeps us in lock-step on its path.  Sin, a power that’s baked in to our very being through our nature and by our choice, controls our choices and makes it impossible for us to choose what is good in the world.  Small temptations and sins create “ripples” in our heart that change our options and make us unable to choose to leave the path of sin.  We are driven to seek our own pleasure, ignore the joy that God offers us, and pursue fulfillment in things that cannot fulfill.

And when sin ultimately takes over in our lives, it performs a “square-one reset” on us.  It replaces our personality, taints our memories, deadens our emotions, and colors our decisions.  We become shells of what we were.

Thankfully, sin doesn’t have the only plan.

“Do you know who wrote it?” 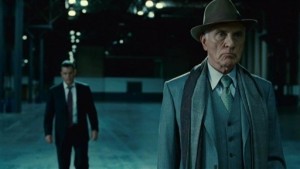 According to Thompson, the Adjustment Bureau has a plan for the human race to survive.  But David wants more than survival; he wants the woman he loves, and the freedom to choose.  He wants to be a part of something bigger, but he wants to actually accomplish it on his own.  He wants to be free of the Bureau’s “adjustments” and able to live his life the way he chooses.

So it’s no mistake that the pivotal scene, in which he decides to pursue his own liberty and a new life, happens at the base of the Statue of Liberty.  Rather than running away from the destiny he doesn’t want, he chooses to run toward the destiny he does.

It’s not an easy path, but he does find what he’s looking for.

The Plan that God has laid out isn’t an easy one, either, but it’s a plan for humanity to thrive.  To live up to our full potential.  It’s a plan that ends with His glory filling the universe – by way of filling every human up with unspeakable joy.  He’s not going to accomplish this with “adjustments” or by watching for “inflection points,” but through loving guidance and the joyful, free worship of His people.

He’ll give you a job in this great plan, and not as a pawn in His cosmic game.  You’ll be working to glorify Him and spread His renown across the universe.  But first you have to run away from the adjustments of sin and seek your freedom in His arms.

So where does this leave free will? 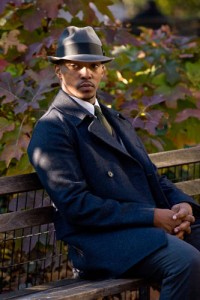 One of the funny things about free will is that we can’t get it on our own.  We’re completely helpless.  Like David Norris, no matter how hard we try to gain that free will and pursue God’s plan, we can’t.  Our nature stops us.  Our power is insufficient.  But we have a loving God.  And like David told Elise, God told us over and over.

God proposed a perfect love to His people, and the forces of Satan did all they could to keep Him from us. They sent all of their agents to adjust His path.  But He sent His son into existence and made a mad dash for us.  When we were moments from giving in and marrying someone we didn’t really love, He came for us, showing us the truth behind the curtain, a land of wonder and amazement.

He made His own way, dying on the cross, 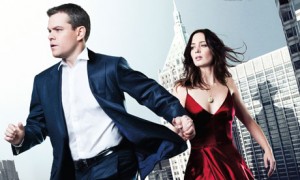 sacrificing everything to be with us because He would rather die than live forever without us. And He rose from the dead, being given a blank page.  A plan He can write.

A blank page which He now shares with His beloved.

Thank you for reading Redeeming Culture. Want to watch The Adjustment Bureau again? [amazon text=Click here&asin=B0055OK2T0] to buy it on Amazon.