So Bad It’s Good: The Liturgy of Cult Films
November 15, 2017 by David Atwell

Last Thursday, I spent the evening throwing spoons at a movie theater screen. Yes, on purpose! 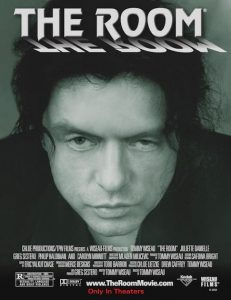 A friend of mine invited me to a screening of Tommy Wiseau’s 2003—um… “hit?”—The Room. To say that it was an experience doesn’t really do it justice; but it certainly did happen, and I was there. And the film was probably the least interesting part.

If you’ve never heard of it before, The Room is an indie film written by, directed by, produced by, and starring Polish-American Tommy Wiseau. It’s not very good; it’s been called “the Citizen Kane of bad films.

And yes, I knew that before going in. The Room is part of a class of films known as “paracinema”– that is, it’s a film that avoids a lot of what more standard films do. It’s a countercultural film. An outsider, alongside Japanese monster movies and beach party musicals. Some paracinema features are good. Most of them aren’t. Many aren’t intentionally paracinematic.

But the real fun isn’t in the quality of the film. The fun is everything else.

Things You Should Yell 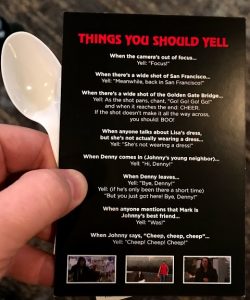 When I walked into the theater, I was handed a postcard with a whole list of things to do. All of which seemed completely nonsensical, since I hadn’t seen the film yet. I’d never been to a film with rules before.

But the crowd already knew all the cues and the lines. It was audience participation like I’d never experienced before. One woman near me brought two boxes of spoons, just for throwing. They even surprised me with lines that weren’t on the card. The whole experience was unusual for me, but strangely familiar.

It was my friend David who helped me narrow down the feeling when he described it as “liturgical.”

A Liturgy of Spoons

I grew up in a church; so the rhythm of standing, sitting, singing, and praying feels natural to me. Even in churches other than my home church, I understand the different beats of the service and can usually follow along pretty well. It bears quite a bit of similarity to the experience of watching The Room, but since I’m not a part of that “congregation,” it was a foreign experience. Without the postcard-sized “bulletin” telling me what to do, I would have been completely lost. But instead, that “liturgy” was remarkably beneficial to my enjoyment of the film.

Our hearts crave the order and group dynamic that a liturgy provides, so churches have had them since the very beginning. It helps guide our thoughts and create a community of people single-minded in a goal. Last Thursday, that goal was making fun of a bad film; on Sunday, the goal was making much of God. But the desire that drives both is the same.

But more than just being a way of channeling people together, it’s a way to unite a subculture.

The subculture of paracinema films like The Room or The Rocky Horror Picture Show is pretty familiar to most Christians. “You mean, you go see a bad movie multiple times on purpose? Just to heckle it?” And while fans of midnight movies don’t typically get tarred or fed to lions, it’s a group that most people don’t understand.

In the early days of Christianity and throughout its history, Jesus’ church has been a haven for people outside the mainstream; and seen rightly, the local church today should be the same such haven. We should welcome the widows and orphans, the needy and bereft, the lost and the hurt. We should bind them up with us and bring them to the throne of Christ in worship together.

You see, there’s a certain comfort in liturgy; on Sunday mornings, Christians are worshipping with the same truths, sacraments, songs, and even words as other Christians around the world. We’re participating in the praise of a God who has been worshipped for millennia on every continent and even the moon. We’re a part of a greater story: the story of the church. We have a desire for this connection deep in our hearts.

But it doesn’t end there. The liturgy focuses us on a single goal, and it unites us with people outside the mainstream. But it also connects us to Someone much bigger.

A curious thing happened after The Room finished. It was presented as part of a media tour promoting a new biopic, The Disaster Artist; so following the film, there was a brief interview with The Room star Tommy Wiseau. And while I was watching it, I felt an odd kinship with him; one that I probably wouldn’t have had if I’d just watched the movie.

In a weird way, participating in the liturgy made me feel more of a connection to the creator of the film.

That’s not a mistake either, I don’t think; God made us to desire a connection with Him, and the sacraments and words of the Christian liturgy connect us to Him as well as to one another. We experience a greater connection to our Creator through the liturgy.

And that’s where all of these desires come from.

Only He can fulfill our desires completely; let’s not settle for anything or anyone less.

Thanks for reading Redeeming Culture. Incidentally, I don’t know if I can recommend The Room; but, if you do see it, you should see it with a well-prepared crowd. It’s quite an experience.