There’s way more to Beauty and the Beast than we were able to fit into our article this week.  Here’s a pair of brief, disconnected, and undeveloped thoughts for you to chew on (they’re delicious – don’t believe me?  Ask the dishes).

You Would Take His Place?

There have been articles made about how Belle saves the Beast and his staff.  But nobody ever talks about the other person she saves – her dad! 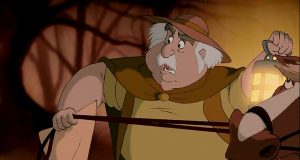 Maurice found himself trapped in the castle.  Hopeless, knowing that no one had any idea where he was, and guarded by a terrible beast (remember, Maurice didn’t know that the Beast was actually human behind the fangs).  Worse still, Maurice didn’t know it, but the Beast was actually getting beastier – the director of the film confirmed in an interview that, if Belle had never arrived at the castle, the Beast would have just continued losing touch with his humanity; he’d become more animalistic, more angry, and eventually completely wild.

Locked in bondage without any hope of escape or rescue, Maurice was left in despair.

But in her love for her father, Belle sought him out.  She found him, and saved him from a slow death in captivity – by taking his place.

The snarkier critics of the world have pointed out that the Enchantress’ curse was phenomenally unfair on multiple levels (was the Prince really only eleven at the time when she cursed him?  Why did his household staff have to be cursed for the Prince’s misdeeds?  What about Chip?).  But I think it underlies an even weightier truth. 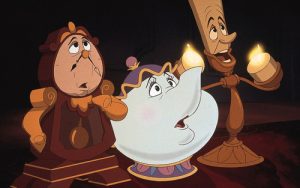 The Beast risked not only his reputation by being cruel and selfish.  He risked his very heart.  Without love, he would grow hard-hearted and eventually become an evil, cruel, beast of a man.  The Enchantress saved him from that by making his appearance match what was inside, but was that truly a fair way to do it?

Maybe, just maybe, it’s worth any injury you suffer if you’re kept from destroying yourself.  And maybe the pain of those around you can motivate change better than any discipline you suffer directly.

Or maybe the Enchantress was just evil.  Not everything matches up perfectly.

One of the sneaky parts of the film that flew under my personal radar until when I was looking things up for Wednesday’s article was actually something from the first few seconds of the film: the Beast’s family crest, which includes the Latin motto “Vincit qui se vincit,” or “He conquers who conquers himself.” 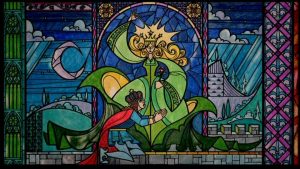 Some people have pointed out that this is a hidden spoiler for the end of the film, where the Beast finally learns to love and win the love of another, but I disagree.  See, I don’t think the Beast conquered himself at all.  I think he was conquered.

Conquered by the harsh trials of an enchantress who saved his selfish heart.

Conquered by the love of his household servants.

The Beast didn’t conquer himself, he was conquered.  The selfishness within him was defeated.  And when he was truly conquered, the curse was broken.

If you haven’t read our original take on Beauty and the Beast, we hope you’ll go back and take a look. That one is a lot more fleshed out and put together, and it’s got a really sappy ending.  Enjoy the film, and thanks for reading Redeeming Culture!

Previous articleReview| Road to the Well

Next article #129 - Get Out and Listening to the Sunken Place