Disney’s animated classic Beauty and the Beast came out in 1991.  That year, it was nominated for an Academy Award – the first animated film to be given that honor.  My sister was two years old when it came out; she learned how to use the VCR for that movie, nearly wearing out the rewind button in the process (and the fast forward, because the wolves were scary).

I didn’t care about many things that didn’t have the word “Star,” “Mutant,” or “Superman” in the title, but the story of Belle snagged my imagination.  I’d usually watch at least one of the loops while my sister went on her binges.  I think there are lots of surprising reasons why it’s so well-beloved; so, in honor of its live-action remake, let’s take a look!

Who Could Ever Learn to Love a Beast?

The Beast was in him from the start.

The silver-tongued narrator who sets the stage for Beauty and the Beast covers a lot of ground, but the backstory sort of sneaks in one of the most important points about the Prince- while the curse didn’t change him physically until he angered the enchantress, the Beast was already in him when she arrived: “Although he had everything his heart desired, the prince was spoiled, selfish, and unkind.”

The evil was part of his true nature; the hair and the fangs just revealed the ugliness that was already beneath his handsome face.  The Beast was in him from the start. 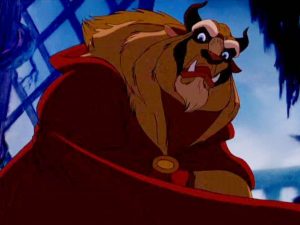 And that beastliness didn’t just warp his appearance.  It also hurt those who were nearest to him, changing them and entrapping them with his evil.  And when his beastliness changed his castle and its people, it left them without hope; for all they knew, they would be cursed by the beastliness forever.

He couldn’t save himself or his friends; he needed the love of another in order to break the curse.  And that’s why he fell into despair; he was sure that no one could ever love him.  For “who could ever learn to love a beast?”

While the cursed people of the castle despaired over their plight, another man basked in the light of his adoring fans.  But Gaston’s braggadocio hid (or perhaps revealed) a dark secret: that he had within himself the same hopeless curse as the Beast.  He, too, had everything his heart desired (except Belle); he, too, was spoiled, selfish, and unkind.  In many ways, Gaston might be what the Prince would have been if he hadn’t been visited by the enchantress.  Only instead of a desire to lose his beastliness, Gaston instead indulged and reveled in it with his massive ego – and his lackeys enabled him. 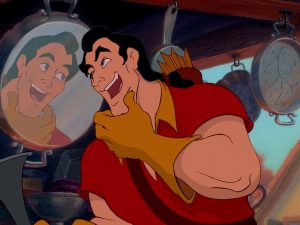 As the film progresses and the Beast grows progressively less beast-like (eventually moving from stalking on all fours to walking upright and wearing clothes), Gaston goes in the opposite direction, making more rash and arrogant decisions and becoming more and more unkempt as he battles against the Beast.  Their character arcs are near-perfect mirrors of one another, with the Beast eventually resisting the base animalistic urge to kill Gaston, even as Gaston gives in to the animalistic urge to stab Beast in the back.  They reveal themselves to be two sides of the same coin – a person-like beast getting progressively more loving and a beast-like person getting progressively less loving.

And in his beastliness, Gaston is a jerk to his followers; Lefou sings about how Gaston’s friends often “take his lumps.”  But you can see a different story in how Beast’s staff treats him.

Even though Beauty and the Beast is the story of Belle and the Beast falling in love to break the curse, I think that the Beast might have been saved years before he even met the “most beautiful girl” in the village – by his household staff. 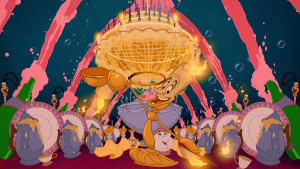 You might find that a bit unlikely.  But some ambiguities in the enchantress’ curse make it possible.  And more to the point, look at how they interact with him; even when he isn’t around, they refer to him as “the Master” – not the Beast.  Mrs. Potts in particular has an agreeable, friendly relationship with their employer, counseling and comforting when he is frustrated.  The wardrobe even tells Belle that “the master’s not so bad once you get to know him.”

Even though they saw his beastliness, they loved him until he was lovely.

These aren’t just people selfishly trying to get the Beast to fall in love so that the curse will be lifted.  These are people (well, objects) who have seen the Beast as he is, but love and care for him anyway.  While they are clearly afraid of him (particularly his temper), they don’t go running or abandon him when things get tough.  They stay.  They “lean in” to him and love him.

His household staff, I think, broke the curse for him; because even though they saw his beastliness, they loved him until he was lovely.

Tale As Old As Time

We love all of these things about Beauty and the Beast because it’s familiar to our hearts, reminding us of things we’ve longed for as if through a magic mirror.  By nature and choice, we are beasts; hurting those around us, hopeless to save ourselves, desperately in need of love.  We slowly grow less beastlike through the love of another, or more beastlike without it.  And only through being loved can we ever hope to become lovely, break the curse, and become the way we were meant to be.

You don’t need a fairytale ending or a talking teapot to enjoy life as God intended you to.  All you need to break the curse is love.  A perfect love; a powerful love.  A love that you can find written in your heart…or in a tale as old as time itself.

Thanks for reading Redeeming Culture!  If you have thoughts about the classic animated feature or the imminent reboot, let us know here or on our Facebook page.

And stay tuned – this Friday, we have another couple of notes about this classic film that didn’t make it into today’s article.  See you then!