There has been quite a crop of Christian movies released over the past few years.  Everything from Sony-subsidiary Affirm Films to a bizarre collaboration between WWE Films and B-horror purveyors Blumhouse have scrambled to release inoffensive, moral, squeaky-clean movies with no objectionable content and a Gospel conversion at the end.   They’re safe for the whole family.  You can feel good about going to these films.  About showing them in the basement of the church.

The Rapture of the Artists 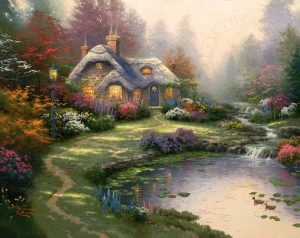 I’m not a dispensationalist (meaning I don’t believe that there will be a rapture), but some Christian movies make me think maybe it came, and only the Christian artists went.  Films for the faithful are often low-budget, featuring B-list actors, washed-up former child stars, and aspiring thespians who haven’t ever carried a storyline before.  The writing can be trite and pat, light on both style and substance, and the direction doesn’t typically take risks.  It feels like the film equivalent of a Thomas Kinkade painting.

I don’t think this is good for Christian art at all.  But does that really matter?  Who cares if Christians aren’t good at art?

Well, I’d say that God does.

That might be a somewhat unexpected statement, so I’m going to defend it from the Bible before I go any further: does God care about beauty?

Well, in Exodus 28, He commands that those who worship Him be arrayed in beautiful clothes.  He intends quality and beauty to be a part of His worship.  In Proverbs 4, having Godly wisdom is said to be like a crown made with beautiful craftsmanship.  Over and over, but particularly in the Psalms, beauty is said to be one of God’s attributes.  Ecclesiastes 3:11 puts beauty in the same sentence as eternity, and says the source of both is God.  Philippians 4:8 famously exhorts the Church to think on things that are “true, honorable, just, pure, lovely, commendable, excellent, and worthy of praise.”  And if we seek to work on the arts, Paul reminds us to “do everything in the name of the Lord Jesus, giving thanks to God the Father through him…Whatever you do, work heartily, as for the Lord and not for men.”

We know the true source and end of all things.  We should make the best films.

This is just a small selection.  But I think it’s clear: God cares about beauty and quality worksmanship.

Plus, we have The Story!  We know the true source and end of all things.  We can truly explore what our hearts will resonate with because we know what they were built for.  We should elevate the art of filmmaking.  We should make the best films, the ones that truly connect with the viewer and make them shout for joy.

So why aren’t Christian films the best?

Partially, it’s because the narratives are so inauthentic.  That is to say, they aren’t showing the narrative that God put into the hearts of the writers, but rather a narrative they’d prefer to see.  A squeaky-clean, just-so narrative that isn’t messy or complicated.  Messy and complicated, by the way, being great adjectives to describe the Story that God Himself is writing.

Jacob doesn’t wrestle with God in the world of Christian film. He sits down with God at a coffee shop and has a tearful breakthrough where he realizes the depth of his sin immediately.  Atheists are well-meaning people whose lives are falling apart until they meet their Christian neighbor, or they’re mustache-twirling villains who seek to crush the pure and solid faith of the hero.

Characters don’t talk like people.  They always have the right answers.  They rarely meet real pain or hurting.  It seems like the writers want to believe that the world is mostly OK, and doesn’t really need any fixing.  It doesn’t reflect our truly broken world.

The world they write is neat and tidy.  Of course, there are secular films who have narratives that stray from God’s story, too; usually even worse, and in the opposite direction.  But the Christian movie claims to be, well…Christian.  More than being inauthentic, Christian films miss the mark because – ironically for a film that claims the genre of Christ – its world just doesn’t have a need for Jesus. 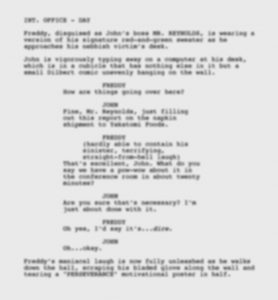 It’s ironic that a Christian film would be what shows people without a need for Jesus, a world so different than the one that the Bible depicts.  And in a world devoid of need, we get some really bizarre interactions.

Instead of Godly thought and discourse, we get a world of pat truths, easy answers, and Jesus-jukes.

Instead of a world of pain and brokenness, we get whitewashed, simple conversions devoid of God.

They peddle an “easy-believism” that substitutes real faith for a “sinner’s prayer” and equates unbelief with criminal activity.  It panders without challenging and offers simple solutions to complex problems.

It’s an echo of the Gospel, handled like the crudest cudgel.

But it doesn’t have to be this way.  Christian film could be really good.  It could be the best.

The stories written by God in the Bible are nothing like a Christian film.

The book of Micah, for instance, begins with a very science-fiction-seeming account of God Himself stepping down onto the Earth, causing the mountains to melt down under his feet.  He promises retribution on the wicked Israelites because they have made the world more broken instead of working for its repair.  He comes in wrath and terror – but then, because of Jesus, welcomes us up onto the mountains to cleanse us and help us work for His kingdom.  It’s a dark and broken world – with a little string of hope tying it down, a hope for a Redeemer who will hurl our sin away in His mercy.

Or think about the story of Jesus and the Woman at the Well.  He doesn’t keep the conversation “nice” or steer away from tough conversations.  He knows that she’s a serial adultress.  And He tells her that He knows.  But He still loves her, and does so in a much deeper and stronger way than you could ever imagine.  He gets to the core of what she desires most, and shows her how that’s Him.

In the Bible, people need Jesus.  And we do, too.  We see our need for Him through the words on the page and the failures of the people there.  We see the brokenness of the world, and the Only One who can fix it.

What would it be like if our so-called “Christian” films were to show a world that was actually broken?  If it gave us a person who didn’t have a tearful conversion in the end that magically made everything better, but still struggled with a lot of doubt and confusion even after coming to Jesus?

What if they showed a true, authentic life with Jesus?

This article was written as a result of the general growing phenomenon in Faith-based films, not as a rebuttal of a specific Christian movie.  I haven’t seen The Case for Christ yet (though I will admit, I’m not hopeful).  There are good Christian films (many of them involving talking vegetables).  But there are also many, many bad ones.

For more reading on the problems surrounding so-called “Christian” films, I really recommend this article from the Gospel Coalition, originally published a couple of years ago.

Previous articleOh! The Horror... | of When God Moves Mysteriously at an Angle

Next article Reel World Interview #001: Elijah Davidson and How to Talk to a Movie

I often feel convicted when my friends ask if I’ve seen the latest Christian film. They’re always so excited by it, I hate to tell them that I’m not really interested. So often, those movies leave me unfulfilled, for all the reasons you stated. The movies have the form but not the substance. They do meet a need, though. Compared to most movies at least these are safe for family viewing. Having a happy cry at the end is expected, there is nothing wrong with that when we accept that it’s all entertainment.

What do you think of some of the old classics? The Robe (1953), Ben Hur (1959), The Greatest Story Ever Told (1965), The Ten Commandments (1956), King of Kings (1961) I include the dates because I think it’s interesting; this was during the era of Hollywood’s great movie-making. These movies used big-name actors, large budgets, and respected directors. Today’s fbm are very pale in comparison.

This article addresses the same reasons most faith-based books don’t interest me. No one is real; their conversations aren’t real, their response to problems isn’t real…… well, you know.

*Some time we need to talk about the Rapture.

Thank you! I’m glad you found some common ground in this article.

The Christian movies that are revered as “classics,” like Ben Hur, are definitely different. In fact, they were so deep within the depths of the Hollywood-that-was, they were almost the platonic ideal of a film from their era. You’re right, they’re certainly outliers. The “exception that proves the rule,” as it were.

Good post about the Christian movies. Its true these movies are low budget but you can watch with your whole family and this is the best thing about these movies.