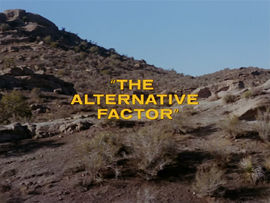 The universe winks at Spock just as the Enterprise is about to survey an uninhabited planet.  On the surface below, a flying saucer suddenly appears; its occupant is a man named Lazarus, who is raving about a terrible monster and his Ahab-like quest to kill it.  But when the crew discovers that the “monster” is another human – one who looks just like Lazarus – and that if they touch one another, the universe will wink out for good this time, Kirk must find a way to stop Lazarus and save the universe.

We’ve reached our first really bad episode of Season 1 (though I would not deny you if you wanted to assign The Man Trap that dubious distinction).  The wasted potential of this episode is truly mind-blowing.

If I were Don Ingalls, the writer of this episode, I would have given the show another editing pass before submitting it to be filmed.  For one thing, I would place a crew member in dire straits (perhaps Scotty, to give Masters a reason to be in charge in Engineering instesad) as a result of the alternate-universe shenanigans, making the danger personal rather than just general to the Federation.  I would include a B-storyline of Dr. McCoy trying to figure out what was wrong with him, which would hopefully tighten up the action.  I would make Kirk and Spock smarter about the decisions they make.

But most of all, I would increase the tension and intrigue associated with literally wrestling with yourself, with combatting the evil “you” who seeks destruction by its very existence.  I think that’s the big wasted potential here, the concept that could be really interesting.  Like all good Trek, it would personify something from within a character and force him to face it.

You, too, face an evil version of yourself who would destroy everything by its very existence. Deadly, murderous, terrible emptiness; the antithesis of all the good you would seek to do.  Your sin is within you, and it seeks your death. It can’t abide your continued existence.

But it also is you, locked in an eternal technicolor struggle with the part of you that seeks God.  And there’s only one way you can win: by letting Someone Else do the fighting for you.  No dilithium crystals required.

Thank you for reading Redeeming Culture! Come back tomorrow for more Trektember as we look at episode 20 of Star Trek: “Tomorrow Is Yesterday”.

Previous article#110 - Kubo and the Two Strings and Redemptive Storytelling