Today’s episode is the episode where Sulu fences: The Naked Time.* 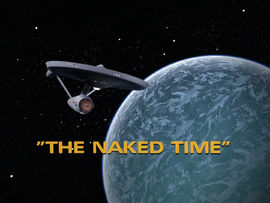 As the Enterprise orbits a dying planet, they seek to solve the mystery of why the scientists at a research station suddenly died.  The mystery becomes even more critical as they discover that the scientists were struck down by a mysterious disease which is now on board the ship.  The planet is breaking up, the Enterprise is spiraling toward it, the crew has gone mad, the engines are down; now the crew must rush to overcome and solve all of these problems at once before they meet their untimely end.

While the Bible decries intoxication, there’s an element of becoming a Christian that is reminiscent of having all our inhibitions removed.  Coming to Jesus is a deconstructive moment; we must lay down all of our treasures and fears, our hopes and dreams, our good works and (especially) our sins, and stand before Him as the bare, uncovered people He made us to be.

Needless to say, this is an uncomfortable experience.  It may even be dangerous.

But it’s incredibly valuable, because the things we carry with us to the Cross are very indicative of how we view ourselves.  Like Sulu views himself as a swashbuckling hero, like Spock sees himself as the tortured, emotionally-repressed logician, like Kirk self-identifies as a man chained to his ship by the love he has for it, we too have a core nature that will be expressed when our inhibitions are stripped away by God at the cross.  And when He shows us our values, He can start working through them to make us who He means for us to be.

Thank you for reading Redeeming Culture! Come back tomorrow for more Trektember as we look at the seventh episode of Star Trek: “Charlie X.”

*“The Man Trap”, the fifth episode produced, was actually shown on television first.  As such, we’re reviewing it out of sequence on Thursday to coincide with the fiftieth anniversary.

Next article Reviewing the Classics| Rebecca