It’s a classic sci-fi/fantasy idea: through a mystical portal lies unbelievable characters, incredible adventure, and a world beyond our understanding.  It could be a talking stone archway, a wardrobe, a painting on a wall, or a closet door through which monsters travel to extract the screams of children.  Or an ancient round ring covered in symbols called a “stargate,” through which you can reach far-off worlds.

Stargate SG-1, which turns 20 years old today, may not have come up with the idea, but it did bring something interesting to the table – and in so doing, it became the longest-running American sci-fi shows in history.

My favorite part of Stargate has always been its mythology. 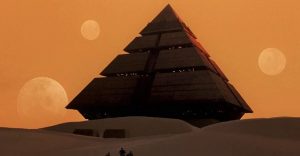 Every story has some kind of mythology surrounding it.  It worldbuilding that lets us know where the story comes from and where it’s going, as well as explaining the motivations and actions of the characters.  Stargate used, as its mythology, actual…well…mythology.  That is, ancient gods.

The show didn’t rely only on established sci-fi tropes or ideas, but also on the existing mythology of literal myths.  It cast the deities and demons of ancient Egypt, Europe, Asia, and South America as the villains of the story – false gods of unbelievable power and avarice.

When we first step into the world of Stargate, the Goa’uld – a parasitic alien race who use their advanced technology to garner absolute power and dominion over the people of many worlds – are no more than a distant mythology to the people of Earth.   But to millions across the galaxy, and on the Earth of the past, their names and stories are still very real. 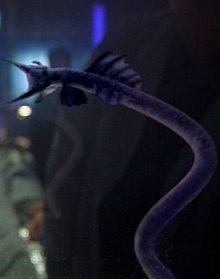 And it’s a horrible reality.  The gods are demonic, evil slavemasters who promise benevolence but deal out death.  They lie and enslave from their earliest days; due to their genetic memory, they’re born with a lust for power and disdain for truth.

They’re also not as powerful as they claim to be; without the technology that they use to retain their pretend power, they’re impotent parasites who take sacrifices for themselves in the form of humanoid hosts.  These hosts then have to endure eternal, constant torment, as they observe their parasite’s evil misdeeds without any control, voice, or even the hope of death.

But despite all of the evil that surrounds them, they’re nonetheless incredibly beguiling to many; their foot soldiers, known as Jaffa, are enslaved to them, but they also worship them fiercely.  Those freed from the influence of a dead Goa’uld will sometimes find themselves in the service to another.

Scripture through the Stargate

Idol worship extends beyond these ancient false gods; even today, we give our worship and allegiance to lying, beguiling, demonic, powerless parasites that suck the life from us and enslave us to their sin.

The Bible calls this type of worship “idolatry,” and even mentions Stargate villains Ra (as “Amon”) and Ba’al within its pages.  The Bible also points out that this idolatry isn’t something humans can escape on their own; the Israelites return to idols over and over throughout the Old Testament.  Like the galactic citizens that SG-1 rescues, the idolaters of our ancient world couldn’t escape on their own.  They needed a Savior; One who was promised in scripture over and over, and One who would finally appear when all hope seemed lost.

But idol worship extends beyond these ancient false gods; even today, we give our worship and allegiance to lying, beguiling, demonic, powerless parasites that suck the life from us and enslave us to their sin.  We’re seduced by money, attracted by impurity, enticed by anger.  And we fall under the sway of these false gods again and again, doing their bidding even as we hate them.  We can’t escape on our own.

These false gods – in the world of Stargate and in the real world – are undeniably liars.  But their existence actually proves a truth. 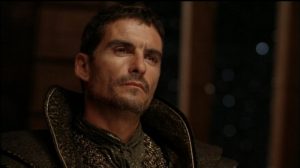 The story of the Goa’uld is a tough sell to most people outside the main cast in Stargate.  In the original 1994 film, Daniel Jackson is delivering a lecture on his theories about the pyramids and the Egyptian language, but he’s laughed out of the room for suggesting that there might be more to the story than what appears in the history books.  In the episode Politics, the team faces a similarly dubious reception when he tries to explain the threat that this larger world poses to unbelieving politicians.  And just about any time something goes funky with the timeline, the team meets disapproving stares at best (and raucous laughter at worst) when they try to explain what’s going on.

To many of the uninitiated on the show, the mythology of ancient Egypt is just mythology—a fun story to tell children, a fiction to enjoy mindlessly, perhaps even narrative with a moral lesson to teach—until they meet the greater reality behind the myth and see that it is actually “true myth,” described by C.S. Lewis as “a myth working on us in the same way as the others, but with this tremendous difference that it really happened.”

Lewis further explains what he means about the myth “working on us:”

[I]f I met the idea of sacrifice in a Pagan story I didn’t mind it at all: again, if I met the idea of a god sacrificing himself to himself . . . I liked it very much and was mysteriously moved by it: again, that the idea of the dying and reviving god (Balder, Adonis, Bacchus) similarly moved me […] I was prepared to feel the myth as profound and suggestive of meanings beyond my grasp even tho’ I could not say in cold prose “what it meant”.

But, of course, Lewis wasn’t talking about Stargate when he came up with the idea of “true myth.”

Now the story of Christ is simply a true myth: a myth working on us in the same way as the others, but with this tremendous difference that it really happened: and one must be content to accept it in the same way, remembering that it is God’s myth where the others are men’s myths: i.e. the Pagan stories are God expressing Himself through the minds of poets, using such images as He found there, while Christianity is God expressing Himself through what we call “real things”. […] At any rate I am now certain (a) That this Christian story is to be approached, in a sense, as I approach the other myths. (b) That it is the most important and full of meaning.

The stories and myths that surround us and fill up our culture aren’t just stories.  They’re by Someone, written by God through the mind of unbelieving poets and secular imagery, steeped in “real things” that God has written directly upon the world.  They’re for something, intended to point us to the Source of true myth.  And they’re about Someone who has created our world, given us a place in it, and written His story on our hearts so that we ring like a bell anytime we hear it.  A God who is unlike the Goa’uld in every other way – a God who is real, and with us even today.  A God who redeems, and calls us to redeem, too.

Thanks for coming through the gate with Redeeming Culture. Step through to the Facebook Page or Subreddit with us to talk more about true myth – and maybe some exciting Stargate Origins-related news!