The Sanctification of One-Punch Man
April 19, 2017 by Ryan Earnhart

There is within all of us a desire to succeed. That means many different things to many different people; writing a book, running a marathon, owning a successful business, raising perfect children.  Maybe having a successful ministry that redeems culture through articles, podcasts, and other media. (ed. What kind of geek would do that?)  Whatever it is that warrants success, we want it.  We dream of overcoming obstacles as if they were never there in the first place, and basking in the glory of having achieved what we set out to accomplish.  But what will we do if we attain our goals?  After reaching the top and basking for a day or two, then what?  Do we continue to bask or do we just keep succeeding with nothing holding us back?  Do we “run up the score” or try something new?  Basically, if you’re successful…what’s next?

This is the situation for Saitama, the titular One-Punch Man in the webcomic, manga, and anime series (currently available on Netflix at the time of this article).

Much like us, Saitama lives in a world of monsters and heroes.  The heroes must apply at an agency to become “official” heroes, and receive compensation for their efforts to save civilians and protect the city.

But Saitama is not one of those heroes.

Or at least he doesn’t start out that way.  He found himself unemployed and discouraged when (stick with me here) a giant crab wearing underwear threatens to end his life, and asks him about a big-chinned brat that might be nearby.  After seeing how dejected Saitama looked, the crab monster feels kinship with him, lets him live, and sets off to kill the boy with a big chin (Did I mention this series is meant to be a parody of manga and anime?).  Saitama defends the boy, killing the crab monster.

“Not again…All it took was one punch.”

Flash forward three years: One-Punch Man has trained so hard that his hair all fell out; but now he can defeat anything and anyone with a single punch (hence the name).  But instead of basking in his glory, One-Punch Man is a “hero for fun” and does it as a kind of hobby.  He’s so nonchalant that people don’t know his name, or even that he’s a hero.  He, on the other hand, is actually bored and frustrated because he has no real challenges to overcome, at one point grumbling, “Not again…All it took was one punch.”

Throughout the anime he will become excited every once in a while by something that looks like an actual challenge from a world-ending villain- but he keeps getting let down by another foe that dies and/or explodes with a single punch.

In all fairness, there are times he uses more than a single swing to kill an enemy; in one battle, a monster yells out his attack combo: a powerful set of moves- which, in traditional manga, would be utterly devastating- with the over-the-top name “Lion Slash: Meteor Power Shower!!”  But after moving in a calm manner (befitting a man leaning away from bubbles floating towards him) Saitama replies with his combo attack: in a quiet, even tone, he calls out “consecutive normal punches.”  Which he proceeds to do.  And wins.

After watching the series, my theology-geek brain started spinning. 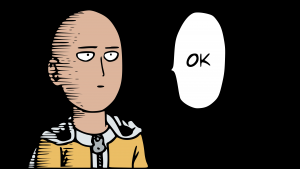 Louis C. K. is also on Netflix right now, with a new stand-up special that was frankly a little hard to sit through at times. But at one point, he mentions raising children and having to discuss religion as a non-religious man.  He said that he sums it up to his two daughters like this: “All religions are pretty much the same, but the Christians won.”

He was obviously expecting a mixed reaction from the crowd and continued, asserting that, of all the religions, Christians had won a long time ago.  What was his proof or measurement for success on the religious front?  The year.  He asks the audience, “What year is it?” and “Why?”  It isn’t because scientists think that’s when the world began, or when humans started this or that thing.  It is based on a calculation about the approximate time that Jesus Christ would have been born.  He goes on to detail how silly it is for people around the world of all religions and political leanings to continue to count their days from the birth of a deity they don’t believe exists or even existed.

So, for entertainment purposes, and according to an atheistic stand-up comedian, we’ve won.  But what about in reality?

No, in all these things we are more than conquerors through him who loved us. For I am convinced that neither death nor life, neither angels nor demons, neither the present nor the future, nor any powers, neither height nor depth, nor anything else in all creation, will be able to separate us from the love of God that is in Christ Jesus our Lord.

Leading up to this passage, Paul has been discussing how the Jews and Gentiles alike were being challenged by the law and sin.  These were our giant crab monsters.  And there were Jews and gentiles that fought those crab monsters and won, like Abraham or Rahab, because their faith was credited to them as righteousness.  Because God gave them strength to do it. 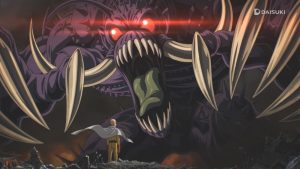 But then Christ came!  He died for us, letting anyone who is in Him come close to God and never be separated.  So that’s like Saitama’s flash forward 3 years to where there’s no more competition, right?  So would it seem likely that we’d feel bored like Saitama, fighting sin and the law like a hobby, living as a “Christian for fun?”

Now, this might come as a shock, but I’m going to say “yes.”

God is for us, so who can be against us?  When we are truly living and believing that, everything in the Christian walk should (key word) feel like a breezy stroll through life, waiting for something to challenge the power of the living God that dwells within us.  The word of God is called a weapon in the Bible, and it can be the same for us.

So every problem should feel breezy.  But does it?  Can you do this?  Are even these promises enough for you, mere mortal?  Are they powerful enough for you to walk around like Saitama, bored by all the sin that has the audacity to challenge you? 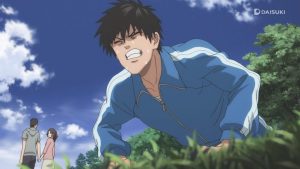 Saitama did not stop fighting monsters. He never ran out of opposition, but he knew and believed he was the strongest and kept proving it over and over again.  Saitama gained that confidence over 3 years of training; we have a life-time of training ahead of us.  Saitama worked out every day for 3 years: 100 pushups, 100 sit-ups, 100 squats, and a 10k run afterwards.  Now, we can make some headway with a healthy spiritual lifestyle: Prayer, reading and studying the word, community with other believers, worship, memorizing scripture, sharing your faith with people every day…

But that’s not enough.  You may have already tried it and found it lacking.  That’s because the power is within you, but it’s not yours.

And there’s only one way to get that power: by faith alone, through Christ alone.

That faith, though it may seem weak and feeble, is a gift of God – and gives us access to the Holy Spirit.

There’s only one way to get that power: by faith alone, through Christ alone.

Through the Spirit, we can become so practiced that we immediately bring to mind the scripture that defeated the enemy the last time we were in a similar situation, and it almost seems too easy.  The Spirit gives us boldness to preach the Gospel to others.  The Spirit gives us wisdom to evade temptation, or to parent well, or to do our job to the glory of God.  And even empower us to do those Spiritual disciplines mentioned above, which will bring us closer to Christ and increase our power even further.  With His power within us, we are truly heroes.  And when that happens, He also gives us one more power: instead of basking in the glory ourselves, He empowers us to give it up to God who was the one really throwing the punch anyway.

And, heads up: there are others that will come alongside us and want to learn what we know; how to be able to one-punch their spiritual problems. This was something Saitama wasn’t prepared for when he met a cyborg (no, really) that wanted to learn from him, and you may not feel ready for a student either.  Just like for One-Punch Man, it’s another obstacle that you’ll figure out how to overcome.  So get your fists up and ready: obstacles are coming our way, seeking to separate us from the love of God.  But don’t worry. We have the Spirit. We will succeed. 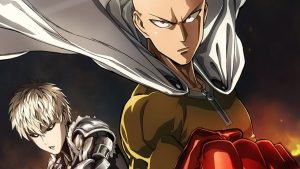 Thanks for punching Redeeming Culture!

Next article #132 - The Fate of the Furious and Bro Bliss

Great message. I enjoyed this series, and I really enjoyed your spiritual take on it as well. The God of angel armies is truly on our side.