The Quantum Physics of The Berenstain Bears
August 20, 2015 by David Atwell

It’s a terrible, horrible plot. The machinations of unfathomable secret societies with impossible technology have struck at our very past, changing reality all around us, warping the world until their dark plan finally came to fruition…they’ve finally and irrevocably changed all mention of “The Berenstein Bears” to “The Berenstain Bears.”

Although this sounds ridiculous, rest assured that…it kind of is. While the Internet has only just begun to buzz about this strange physics brainbuster, discussions of the Berenstain vs. Berenstein debate go back at least to a Reddit thread from a year ago.

It’s been dubbed the “Mandela Effect,” so named because of how many people remember South African politician Nelson Mandela dying in the 1980s in prison; many even remembering funerals and riots associated with his death. In reality (at least in our reality), Mandela was freed from prison in 1990 and died in 23 years later as a free man.  Believers claim that, in the original version of reality, he did die in the 1980s, and we’ve moved to a “parallel universe” in which Mandela survived to the present.

Some of those who remember the beloved bears’ surname as “Berenstein” claim that the strange memory is, similarly, a result of these overlapping parallel universes; that we have somehow been transplanted from the “E” universe into the “A” universe, en masse.

Others claim that those who believe this are just misremembering the past.  But the idea is gaining traction because it’s not entirely scientifically impossible; parallel universes might exist, each a universe in which a different possibility became a reality.  Perhaps, the theory goes, a villain snuck back in time and changed a small detail in the past for his own ends.  The side effect is that some people remember a past where events unfolded differently than the history books tell us.

And from a different perspective, it’s also not entirely theologically impossible.  In fact, there is a terrible, reality-shattering plot unfolding.  And none of us remember the truth in this warped reality.

This reality actually began to unravel almost immediately after it came to pass.  A perfect God made a perfect universe and put perfect people in charge of a perfect world within it, but a villain enacted a dark plot that changed one element for his own ends: he turned those perfect people against God, convincing them of lies and making them see the world wrongly.

Soon, the universe was unrecognizable.  Perfection had shattered, and the beauty of the original was marred with sin and curse.  And the people within the universe forgot that they were royalty, losing track of their allegiance to the creator and ending up face-down in the dust.

In this bizarre parallel universe, what was once considered right are now viewed with disdain, and those who commit wrongs are praised.  The E’s are now A’s.  And it’s hard to believe it was ever any other way.

You So Easily Forget 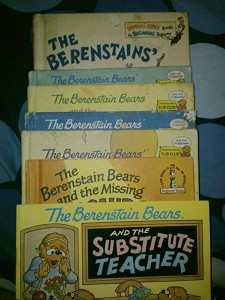 People who remember “The Berenstein Bears” – along with people who remember Mandela’s death, or a different color of chartreuse – are mystified by those who don’t remember their alternate version of reality.  Whether it is a delusion or not, they truly seem to believe that the world has fundamentally changed around them.

And our strange, parallel universe doesn’t look that bad to most people, either.  But because of that dark plot, we are doomed to forget the beauty that we once had until we die.  The villain keeps messing with our minds, giving us reminders of a world that never was and never will be, while God’s world slips further from our consciousness.

In a quote that I cannot find a source for but is widely attributed to reformer Martin Luther, a pastor was once asked why he preached the Gospel so often.  “Because you so easily forget,” he replied.  When God gave us the Gospel, though, he wired it into our hearts; and remembering is a simple matter of seeing something that reminds us again.

The secret is, you always see those reminders.  You just don’t always know they’re there.

Why are you here?

That’s why Redeeming Culture exists: not because the Weird Side of the Internet keeps churning out more strange stuff, but because our current world contains reminders that we can use to see the original perfect creation, if only we look hard enough.  We want to help show them to you.

I don’t know whether we’re transplants from a parallel universe or if there’s just some sort of mass psychosis overtaking Reddit day after day.  But in every universe I’ve ever lived, God has been supreme.  And one day He will return us to that original, glorious, beautiful creation.

Thanks for reading Redeeming Culture! If you want to read more about our lost creation, check out last week’s article, Awake, Thou That Sleepest.  And if you like what you’ve seen, we appreciate whatever support you can give. Thank you!

Previous articleIn Theaters August 21st, 2015Next article #070 - Back to the Future and Relevance