Awake, Thou That Sleepest
August 12, 2015 by David Atwell

I’ve always wondered about the south window of Redeemer Presbyterian Church in Indianapolis.  It’s a beautiful opening that towers over the sanctuary and frames a lovely visage of…absolutely nothing.  All of the other windows in the room are pleasant, abstract stained glass works, but the prime location stands vacant as a massive pane of simple, stark, transparent glass looking out to the courtyard.

There are stories about the window; about connections to President Benjamin Harrison and Louis Comfort Tiffany, as well as the Indianapolis Museum of Art.  But when I set out to find what I could about the window, I learned of a tragic story that reflects everything we’ve ever mourned.

Monday, November 21, 1904.  Amid light fanfare, the Archangel Michael took his post in the south window of a stately, almost palatial stone building at 16th and Delaware in Indianapolis; arm raised in summons and clutching a trumpet, he spoke one of the most beautiful sentences in history:

“Awake, thou that sleepest! Arise from the dead, and Christ shall give thee light!”

Michael (or rather, “Angel of the Resurrection,” the stained glass window depicting him) was designed by famous glassworker Louis Comfort Tiffany’s studios.  It was commissioned and paid for by former U.S. President Benjamin Harrison’s widow with the requirement that it never be duplicated for another window, and donated to the congregation he had led for forty years, First Presbyterian Church.

Angel of the Resurrection weathered some of the most historic and turbulent times in our nation’s history from world wars to the moon landing.  But sixty-six years after it was installed, almost to the day, the window’s future was cast into doubt.

In the 1960s and 70s, Indianapolis became a much different city.  Increasing crime, a weaker economy, and racial tension emptied downtown of its population; membership at First Presbyterian decreased rapidly, and by 1967 the congregation had dwindled to a fraction of its former size.  To make things worse, the increasingly poor areas around the church desperately needed outreach ministries, but the smaller and less affluent congregation could barely afford even the basic financial needs of the church.  So in 1970, the church merged with one of its daughter churches, and when the First Presbyterian building became a community center for the inner city, the window was put into danger.

For two years, the danger of vandalism, disaster, or accident destroying the window was very real.  But in 1972, the Indianapolis Museum of Art stepped in and offered to pay all the costs for transporting the window in exchange for making Angel of the Resurrection a part of their permanent collection.  When Redeemer Presbyterian Church began meeting in the building in 2001, they worshiped under a simple transparent window.  Only the grand window frame remains, a heartbreaking reminder of the beauty that once was.

Our world was conceived in beauty, too.  Unbelievable, incomparable beauty that even God said was “very good.”  A lush, beautiful garden wherein God would walk among His creation, and humanity would never have need of anything.  No sickness, pain, or sadness lived in this world.  And in a single, horrible moment, the whole thing was shattered by the ravages of sin.

The more beautiful and wonderful something is, the greater the tragedy if it is lost.  When Adam and Eve sinned, the greatest tragedy of all time happened – creation itself was lost.  Paul says this loss carries with it futility, groaning and pain; instead of perfection and beauty, we’re left with a mournful, transparent frame surrounding what once was.  And just like we weep for lost opportunities, faraway friends, or even dead loved ones, the beauty of the creation we’ve lost causes us to mourn.

But we mourn even more because of the reason it’s all been lost.  Adam and Eve alone did not commit the sin that subjects creation to groaning and pain; it is your sin, too, that put the curse on our world.  Our sin has harmed us deeply, and each other even more.  As Jason Dorsey observed, “You and I have brought enough brokenness and wounds by our own sins to make us lifelong mourners.”

Lifelong mourners, but not eternal mourners.  When Christ came to redeem us and rescue us from the sin we found ourselves in, He wiped our tears away and gave us the good news: like the window, we may have lost creation, but it wasn’t destroyed.  Instead, it was redeemed; saved to be restored!  In eternity to come, after our earthly life ends, we will be a part of this new, redeemed creation.

This redemption is costly; when Jesus came to earth, He begged for God to come up with another solution, some other way to restore creation, but the only solution was His death; the death of a perfect, innocent man to bring life and perfection to humanity, guilty though we were.

Unfortunately, we can’t reach that life on our own.

Angel of the Resurrection 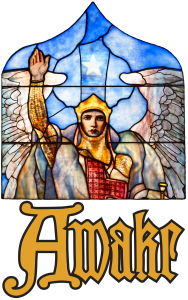 In the window, Michael is heralding that beautiful, final moment when we receive God’s final, perfect creation.  He’s calling people to feel the love of Christ upon them.  “Awake, thou that sleepest!” he calls out using Paul’s words from Ephesians.  But then he orders everyone to “arise from the dead.”  Impossible, you say.  The dead don’t obey commands, especially not this one.  And you’d be right; we’re all dead in our sins, with no power to save ourselves.

But that’s why this is the most beautiful sentence in history: the very command to rise from death includes the power needed to raise us – the light of Christ!

Maybe the building will never get its stained glass window back.  But when Christ returns, He brings with Him an end to mourning and His perfected creation.  Our window, perfected, restored and cleaned, will be ours to look upon forever.

Thank you for reading Redeeming Culture! If you’d like to have Tiffany’s beautiful image on a t-shirt or other “swag”, we have placed the beautiful window on several items:

And as always, we appreciate your readership and your support.