The Girl and the Golden Calf
March 8, 2017 by David Atwell

Overnight, a statue of a little girl (I’m calling her “Auda”*) appeared in New York City.  She’s a striking figure, with a fearless look on her face and her hands defiantly on her hips.  And she’s standing right in the way of the famous Wall Street Charging Bull, which has stood guard over the entrance to the famous financial district for nearly thirty years.

It’s quite a picture.  On one side is a massive, powerful figure representing the strength, unpredictability, and even danger of the financial world; on the other, a little eight-year-old girl, rendered life-size, in a dress, ponytail, and sneakers. 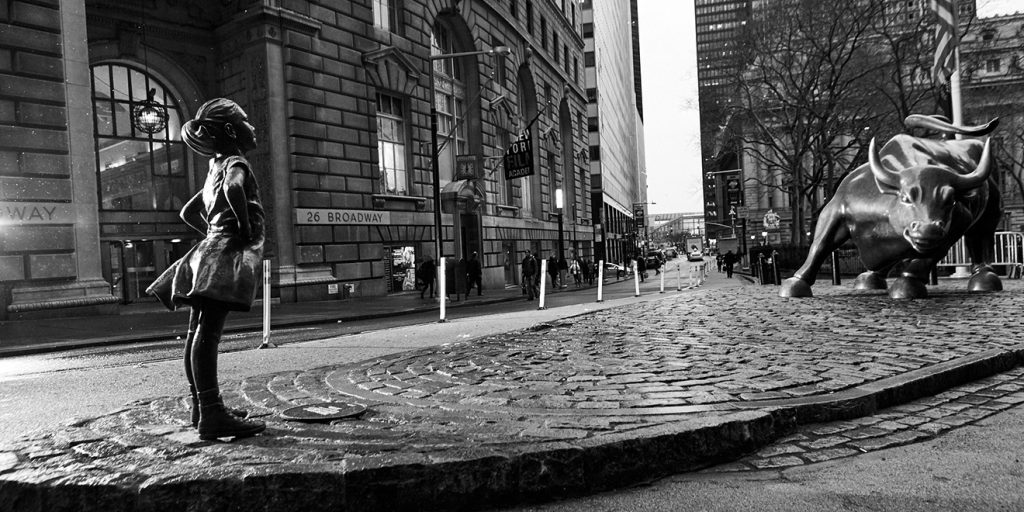 In just a few weeks, perhaps a few days (maybe a few hours!), I will become a father again; this time, to a little girl.  And what I see in Auda’s face is the kind of mighty girl I want my daughter to be.

A Tale of Two Metal Cows

When God was leading the Israelites out of Egypt, He wasn’t just setting a group of people free.  He was putting together a nation and a church from what had once been just a very dysfunctional family.  This nation was supposed to be a shining example of God’s power, love, and mercy; so He gave them instruction on how life was supposed to work in that nation.

But while God was detailing all of this to Moses, the man in charge, the people got restless.

When the people saw that Moses was so long in coming down from the mountain, they gathered around Aaron and said, “Come, make us gods who will go before us. As for this fellow Moses who brought us up out of Egypt, we don’t know what has happened to him.”

Aaron answered them, “Take off the gold earrings that your wives, your sons and your daughters are wearing, and bring them to me.”  So all the people took off their earrings and brought them to Aaron.  He took what they handed him and made it into an idol cast in the shape of a calf, fashioning it with a tool. Then they said, “These are your gods, Israel, who brought you up out of Egypt.”

Okay, so Auda’s bull is bronze.  But the golden calf probably wasn’t an arbitrary choice.  The Israelites had just spent twenty generations in Egypt, living in their cities, working with their people, and worshiping their gods.  And the Egyptian god Apis was, in fact, a cow.

The golden calf probably wasn’t an arbitrary choice.  It was a slap in the face to God.

So when the Israelites chose to make their idol in the form of the calf, they were not only identifying themselves as Egyptians (a nationality other than God’s chosen one), they were also attributing the True God’s rescue of them to their captors’ own fertility god.

It was a slap in the face to God.  No wonder God told Moses of His unfathomable anger in that moment.

John Calvin described the human heart as a “forge of idols;” we can see that time after time in our own lives.  And God is no happier with the bronze idols forged by our hearts than he is with the Israelites’ idols of gold.  The golden calves of idolatrous desires are forever sneaking in to our hearts and our actions. 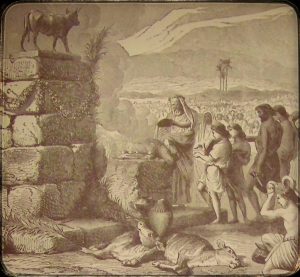 Of course, it is easy to see what false god the bronze bull in New York might represent; our culture idolizes money and success, insisting that the people who walk by the bull on their way to the stock exchanges and banks are worthy of our praise.  Someone needs to stand up to these idols.

Unfortunately for us, there’s no way we can destroy those idols.  Only Christ can, through the power of His death and resurrection.  We can’t stop them.  But maybe, with His strength, we can stand in their way.

Standing In the Way

The Bible does give us examples of people standing defiantly in the way of those idols, though.  Many of them women.

All of these fearless women stood defiantly in front of a massive, charging idol, and pointed people toward God instead.

Resisting the Power of This World 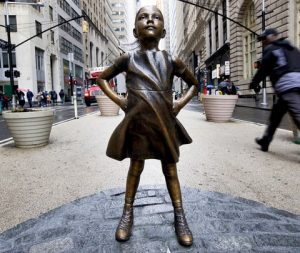 And this is what I want for my daughter.

She’ll also have the examples of more contemporary women to follow: of Margaret Hamilton and Ada Lovelace; of Ruby Bridges and Rosa Parks; of Mary Wollstonecraft and Annie Lumpkins.  And of her mother and grandmothers and aunts, all of whom are mighty in distinct ways.

And I want her to be like Auda: inspiring the world with her courage.

This article is dedicated to my wife and the strongest woman I know, Natalie; and to my daughter, whom I hope to meet soon.

* “Audaz” is the Spanish word for “Fearless.”  This seems apt to me, since she’s modeled after a Latina girl.