The Cup of Thanksgiving
November 24, 2016 by David Atwell

The meal always gets the press at Thanksgiving. The turkey, the stuffing, the potatoes. And the dessert doesn’t exactly get ignored; the pie makes itself well-known. But nobody ever talks about the drink.

Except in my family. Since we were children, my parents have wanted to mark the day specially, with nice plates and such. And when we were too young for champagne, my mother bought us sparkling grape juice and poured it into stemware—a tradition we continue today. The only problem is, Welch’s sells their faux-bubbly in both white and red versions. And nobody can remember what anyone else prefers. 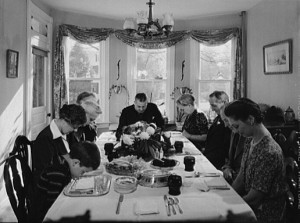 After the glasses are full, we give thanks. But in thinking about it, maybe it’s a little hollow. Here we are talking to the God who spun entire galaxies into space by hand, who built our world from the very foundations, who breathed life into us, and saved us by sending His son while we were still rebellious. He’s the God who holds everything together from the subatomic particle to the superstructure of the galaxies. And we’re giving thanks with a few minutes of silence between grape juice and potatoes?

What Thanks is Enough?

It doesn’t seem like enough because it isn’t enough. God creates, sustains, and saves; everything we have and everything we are is a gift from Him; even the prayers, praise, and good works we do.  If our lives are a cup, He fills it with everything.  So what sort of thanks can we give?

The Psalmist has an idea of thankfulness, but it seems a little unusual.

What shall I render to the Lord
for all his benefits to me?
I will lift up the cup of salvation
and call on the name of the Lord.

Wait…His salvation is one of the benefits, right? So he’s asking for more debt…as repayment? That doesn’t just sound odd, it almost seems like nonsense. Any bank you go to would probably think so.

So what sense does that make?  The passage notes that this is how we worship God for what He has given. “I will offer to you the sacrifice of thanksgiving and call on the name of the Lord,” it says in verse 17. God desires for us to need Him. He is glorified in our accepting and pleading for His help.  We can’t do anything on our own, so God isn’t glorified by our trying to pay him back; He’s glorified by our need for Him.

He created us to need Him, and when we call out for help, He will refill our cup.

The Cup of Salvation

But there’s more to this than a simple goblet, or even some sort of energy or refreshment.  The word for “cup” that is used here shows up all around the Bible, often as a loving gift from a gracious God. It’s the cup of provision that the man lets his pet lamb drink from in Nathaniel’s parable from 2 Samuel 12. It’s the famous cup that runs over in Psalm 23. And it alludes to the cup that Jesus pours during the last supper – the Cup of Salvation.

“Oh, may the hole be deep, deep, deep – and may you be at the bottom of it, with grace all over you!” -John Piper

We don’t ever get to the bottom of that cup, for it is full of grace.  We never pay it back; we never even make a dent in that debt.  But as John Piper said, “oh, may the hole be deep, deep, deep – and may you be at the bottom of it, with grace all over you!”

Far from the ambiguously-colored fake-champagne gracing my parents’ table today, the Cup of Salvation is something that only God can fill.  And something we all desperately need.

This article is heavily inspired by the sermon “How Do You Keep On Going?” by John Piper, my favorite sermon of His and a primary factor in Christ calling me to Himself.  I recommend it highly for your long weekend.

Happy Thanksgiving, and thank you for reading Redeeming Culture!