Hope through Failure and Success
February 3, 2016 by David Atwell

So you failed your New Year’s resolutions last year.  This year you vowed the same, maybe even tagging on some more, because this time it will be different.  And you headed to the gym on January 1, along with all the other resolvers.

But it was hard, and the snow was really bad one week, and you were particularly tired, and besides, January is a terrible time to try to get in shape anyway, so maybe another bag of Doritos won’t hurt.

Or maybe it felt good, and even better as the weeks went by.  You watched the number of open machines grow, feeling somewhat smug because you were still keeping up with your resolution.

Of course, “exercise more” is far from the only resolution.  Smoking, job goals, life changes…one of the top resolutions in the United States is simply “become a better person”- another oft-failed resolution.

Whether you’ve failed or succeeded, this is the time of year when people try to change themselves, and the beginning of February is when they really begin to fail.  So why is it so hard to make ourselves better?

We’re going to investigate this question through the lens of the Prodigal Son; you can pick up the story in Luke 15:11-32.  Of course, the broad strokes of the Prodigal Son are familiar: A man has two sons, the younger leaves and squanders a fortune, and is welcomed home by his father with open arms.  But there may be a few things you’ve missed.

The Leaver vs. The Stayer

One thing people often miss when describing the story of the Prodigal is verse 12: he didn’t just run away.  He asked for his dad to give him his inheritance first, which seems like a tough request – and more so when you realize that an inheritance is something you leave behind after you’ve passed away.  So the younger son’s request really means “I wish you were dead.”  On top of this, an inheritance is usually a fairly large amount of money; Jewish inheritance laws were complicated, but suffice it to say that a large percentage of the father’s wealth went to the young man.  The family who remained likely faced hardship, or at least inconvenience, as a result of the younger son’s request.

All of this together paints a picture of the son as cruel, uncaring, and selfish.  A picture which is borne out by the remainder of the story. 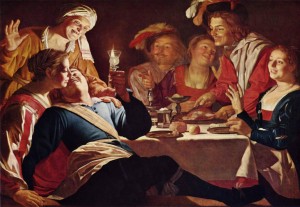 He gathers his possessions (now quite sizable as a result of his early inheritance!) and takes off, squandering that money on, as the ESV says, “reckless living.”  It’s mentioned that women were involved, probably alcohol too, perhaps fine clothing and more.  He used the money, not for the good of others or even to benefit his friends, but frivolously, satisfying his every whim as it came.

Maybe that’s you, avoiding the pressure of the resolution you made to “become a better person” or “get close to God.”  Maybe you’ve decided to ignore the very idea of a loving Father who wants the best for you, and run off to search for a joy of your own making.  Maybe you’ve even found it for a while. 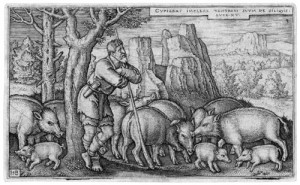 But sooner or later, the money runs out.  The younger son’s money and friends have left him by verse 14, and even the world around him becomes bleak as a famine hits the land.  The son takes what job he can get.  In this case, it’s a job feeding pigs – an especially distasteful idea to Jews, who consider pigs to be unclean animals.  He’s literally reached the bottom – and that’s when his life turns.

He remembers his father’s kindness to the men he employs, but he also remembers the selfishness and cruelty with which he treated his father.  How he wished that his father was dead so he could get his money.  How he left his father in hardship while he went off to seek his joy in anything else.

The Broken vs. The Fixed

Let’s step back to the beginning of the story.  The younger son has left, spurning his family and burning bridges behind him.  But the older son remains, faithfully working the fields, staying by his father’s side, and helping around the home while his brother is off squandering his fortune.  He’s righteous, the model of a good son in that society.  As a result, his father blesses him with his trust; “all that is mine is yours,” he tells the older son.

Not only is he a model son, he seems to be a model friend.  Though he’s been living a somewhat frugal life (especially when compared with his brother), he has friends.  He’s clearly well-liked in the community.  The older son looks great from the outside, and he’s proud of that.

Is that you?  Are you doing great in your resolution?  Do you feel like “lose weight” and “be better with money” will be checked off your list by this time next year?  Maybe you see the Father as an unnecessary part of your story, because you’re doing fine on your own.  Surely He’ll see that and reward you. 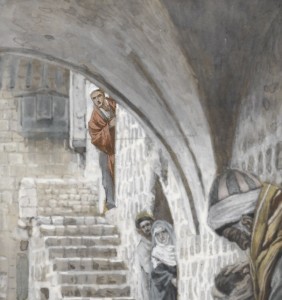 But a few years later, the older son is coming in from the fields when he sees a lavish party being thrown at his father’s house. When he’s told that his brother is being rejoiced over, he’s furious – and that’s when his life turns.

The older son thinks about how rude and selfish his brother was.  He remembers how the family was forced to cut back, and he had to do extra work to cover for his absence.  He remembers his brother’s back, retreating into the distance, and the fact that his father has never given him the lavish treatment that the younger son is getting.

The Hopeful vs. The Cynic

They’re a study in contrasts.  The younger son doesn’t think he deserves to be a part of his father’s family anymore (“I’m sure I can’t be a son, but I can be a slave”).  The older notes that his Father never gave him the recognition he really deserved (“He doesn’t deserve this party, I deserve this party.”).  Both are cynical about their father’s opinion of them. 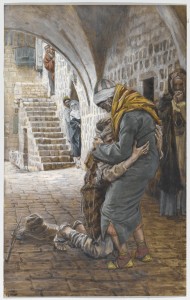 He has such great hope that he’s apparently been watching for his younger son to return home.  When his older son complains about the party, he assures him that everything he has belongs to his son, in the hope that he will rejoice with him.

Here is rejoicing because his hope is fulfilled!  Here is a party because the dead is alive today!  Here is a feast, and fine clothing, and jewelry, and running, and dancing, because there is no other way to express his gratitude.  The father’s hope is beautiful, and we don’t notice it enough in this story.

When you listen to what the culture says about resolutions, it’s clear that not many people think they’re going to succeed.  Forbes noted this cynicism in our culture four years ago, and if anything things have gotten worse.  But cynicism won’t get you to the gym.  Resolutions won’t make you a “better person.”  Only hope can change you.

This hope moves more than mountains; it moves the heart.

Thank you for reading Redeeming Culture! Want to read something about the Prodigal Son that was written by someone WAY smarter than I am? Try out [amazon text=The Prodigal God&asin=1594484023] by Tim Keller.

I love the story of the Prodigal Son (It’s my favorite) and the teachings it contains. I love that it shows just how well God knows us and yet, when we move to look in His direction, when we begin a slow shuffle toward Him, He has been watching for us and runs to gather us in His embrace.
That is not the actions of a “distant” God who just leaves us to our own devices. I am so grateful to see my God in this fuller picture.
He’s not a tame Lion, but He is good!
Thanks for this post, you just got me all hyped-up for God!

I’m so glad you enjoyed it!