Space Day, Race Day, and Memorial Day (Lightning Round)
May 27, 2015 by David Atwell

Occasionally, a week is so busy that we feel a need to comment on more than one thing. Usually we release multiple articles, but this week we’re going to try something new: the Lightning Round.

We’re going to take a quick look at three big events that happened this week and just give a brief taste of the Redeeming Culture implications; it’s all tied together, though.  This week, the theme is Misused Bible Verses.

Monday marked the 54th anniversary of John F. Kennedy’s famous speech calling the nation to reach for the moon. “I believe that this nation should commit itself to achieving the goal, before this decade is out, of landing a man on the moon and returning him safely to the earth,” he said, and with those 31 words our course was set: the United States was going to the moon. As a space geek since childhood, Kennedy’s words to Congress are ingrained upon my mind—partially because of their ludicrous context and partly due to their incredible conclusion.

In 1961 when that speech was given, the idea was near enough to utter insanity. NASA was not quite three years old and had sent a grand total of one American into space, and that had happened only three weeks before the speech was given.  The Wright Brothers’ first flight was less than 60 years prior.  But Kennedy’s words (and, to be fair, the money pledged to the effort) were so strong that it took slightly more than nine years until Neil Armstrong took that “small step for a man.”

Kennedy certainly had a vision, and it would be tempting here to quote Proverbs 29:18; “Where there is no vision, the people perish.” (KJV) And to be certain, vision and planning is important.  But while vision and leadership are important, the word translated “vision” in that passage more rightly means “prophetic vision,” and “perish” really refers more to a breakdown of society.  So a more accurate reading might be “where the Word of God is not, the people go crazy.”

What does this mean for Kennedy? He was not following Proverbs 29, and it is not his words that held our nation together.  Rather, the words that he said- powerful, galvanizing words- set our minds on an epic goal beyond any of us.  The goal of the moon united our country in a new way that no one had done before.  It was the reality of something larger than us (in this case, the moon) that united and codified our society in that decade.

Similarly, we must come together as Christians to reach for God.  Psalm 96:2-3 gives us a goal: ” Sing to the LORD, bless his name; tell of his salvation from day to day. Declare his glory among the nations, his marvelous works among all the peoples!”  The goal of showing His glory is much greater than us, and even impossible; the reality of that larger goal is what should unite Christianity together in the Holy Spirit to spread God’s prophetic vision around the world, and even to the moon. 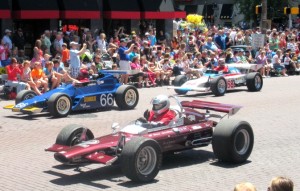 I live in Indianapolis, and around here it’s impossible to ignore the Indy 500 even if you try; though the track is on the west side of the city, the skywriting and advertising fills all of Central Indiana during the entirety of May, 500-related events like parades and half-marathons spill out into the city as a whole, and even the sound of the cars on the track can be heard more than five miles away.  It certainly makes its presence known.

It reminds me of the way we know about God.  Romans 1 says, “What can be known about God is plain to them, because God has shown it to them…so they are without excuse.” (Romans 1:19-20 ESV)  Like the track makes itself known throughout the city, so God makes Himself known throughout creation.

Some might say that God will not punish anyone who rejects His son, because God is love (1 John 4:8).  “God is love,” their reasoning goes, “and so there is no way that God would ever send anyone to hell, because that’s an unloving thing to do.”

Sadly, in saying that, they have completely missed 1 John 4:9, the verse directly after.  The whole passage reads:  “Anyone who does not love does not know God, because God is love. In this the love of God was made manifest among us, that God sent his only Son into the world, so that we might live through him.” (1 John 4:8-9 ESV, emphasis added)  The verse makes it clear: God’s son is the expression of His love, and Christ was sent to save us from the sin we commit and the wrath of God that awaits us for it.

In order to experience God correctly, you must go to Him.  Similarly, while the Indy 500 is impossible to miss in Indy, you have to actually go to the track to experience the race.  There’s just no way around it; Christ is the only way to experience God’s famous love.

Memorial Day is a great day on which to remember those who fought and died for our freedom, but there is a misused Bible verse here, too.  Often when marking Memorial Day, you can hear people use John 15:13: “Greater love has no one than this, that someone lay down his life for his friends.” (ESV)  While it’s a beautiful and noble sacrifice when men and women lay their lives down to save others, this verse is not talking about the soldiers who died in the war.  It’s talking about Jesus.  Actually, it’s Jesus talking about Himself.

See, John 15 is part of Jesus’ last sermon to His disciples.  In it, He tells them to love one another, and uses Himself – His sacrificial death – of an example of how to love.  In His death, He gave all of us life, and the ability to lay that life down to protect and save others.  So when a soldier gives his life in service to his friends, his country or his people, his story is powerful because it’s an echo of Jesus.  We’ve been hardwired to love Jesus’ story of sacrificial love, and when we see an echo of it in the world, we’re seeing a powerful example of the love Christ has for His people.

We hope you’ve enjoyed this look into some of the big things that have happened this week through the lens of the Gospel.  Don’t miss out on these awesome examples of God’s story in our lives!  Keep your eyes open, because they’re everywhere.

Also, thanks for reading Redeeming Culture.  If you’d like to support our mission to show the power of God to the world through the culture around us, click here.  And if you’d like to write for us, we’d love to hear what you have to say.  Thank you!

Previous articleRe:View| The Princess BrideNext article In Theaters May 29th, 2015