You’ve probably heard the old adage about God making a rock so heavy that even he can’t lift it. But what about a simple wooden ladder? 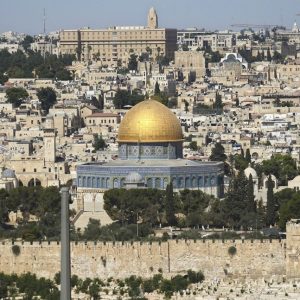 About 300 years after Jesus’ death and resurrection, the Roman emperor Constantine ordered construction of the Church of the Holy Sepulchre, a site in Jerusalem commemorating the location of Christ’s crucifixion, burial, and resurrection. It was a time of unity and recovery for Christians, as they were finally allowed to worship in public.

Over the next millennium-and-a-half, however, a lot of things changed (that may be the understatement of the millennium). Several different traditions broke away from the Christian church; Islam rose and began asserting its claim on Jerusalem; Constantine’s building was destroyed and rebuilt; the Ottoman empire rose and took over Jerusalem. And so, about 1,500 years after Constantine built the Church of the Holy Sepulchre, its ownership came to be contested by six different Christian sects, in a Jewish land, ruled by a Muslim Sultan.

In the mid-18th century, frustrated at the infighting and conflict in Jerusalem and the Holy Land, this Sultan – Osman III – issued a firman, or decree: simply stated, this decree said that whoever owned a site in the Holy Land would maintain their possession of that site forever.

This decree applied to nine sites in Jerusalem and Bethlehem—including The Church of the Holy Sepulchre—claimed by various Christian, Muslim, and Jewish sects, and it was known in Latin as the Status Quo.

Before this decree, The Church of the Holy Sepulchre was jointly claimed by six different Christian sects, all of which had deep opposition and conflict with the others. Now, however, they were forced to work together; in order for any changes to be made to the building, all six sects (some of whom had regular fistfights with others) would have to agree on the changes in advance. 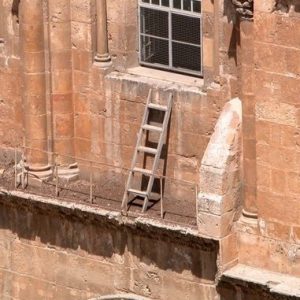 And this is where the ladder comes in. One day, a mason was using a simple wooden ladder to work on one of the windows of the building, and went home for the day. But before he came back the next morning, the Status Quo decree was handed down; so work on the window was stopped, and the sects couldn’t even agree on how to take the ladder down from the window; so it stayed.

The history of the ladder is often told to shame Christians who would disagree with one another, or to express sadness at how the unity Jesus prayed we would have was so quickly discarded. But I think it’s about something else.

I think it’s about our heart’s desire for, and fear of, Status Quo. 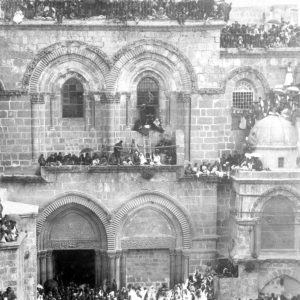 It’s hard to live your life that way, when what you think is solid now could turn liquid in a few minutes. Thankfully, God is always the same.

Which, I’ll admit, is something we say a lot. It’s tough to know what that really means, or how that helps. What does it mean that God is always the same?

All of this means that God will keep us safe; He will be our solid foundation. In an ever-changing world, He is the universe’s status quo, our rock; He is the same yesterday, today, and forever. Nothing can move Him, nothing can change Him.

But He does not leave us that way.

Status Quo Will Kill You

Immovable as it seems today, one day that ladder will move. 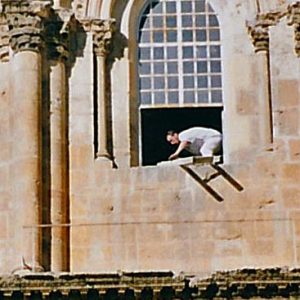 It’s incredibly frustrating to feel like you’re locked in the status quo; that you aren’t making any progress. It’s common to feel like nothing ever changes, to feel the vertigo of looking forward in time and seeing nothing but that same corridor we’re in, going on forever and ever into eternity.

It’s frustrating and terrifying because that’s a recipe for death.

But God is good, wise, and powerful; and He brings all three of those things to bear on the reality of our sin, giving us the growth that will make us more like Him. He moves the ladder in our hearts, changing our status quo from a desire for sin to a desire for Him.

He is not leading us into death. He is sanctifying us for life.

This might all seem academic, but it’s very real and personal. The story of the Immovable Ladder shows us our love and fear of the status quo; and we have both love and fear because God embodies His own status quo, even as He destroys the status quo of sin in our hearts.

For the time that the ladder remains in its place on the Church of the Holy Sepulchre, and long beyond, God is good, wise, and powerful; He is the immovable ladder, and He is moving the ladder in our hearts to become more like Him.

Whatever your status quo needs today – stability or change – seek it out in Jesus, who loves us perfectly forever.

Next article Oh! The Horror... | of the Unknown