The True Meaning of Covfefe
June 7, 2017 by Ryan Earnhart

The president of the United States of America is currently a man named Donald Trump. He frequently chooses to address the citizens of those states through a social media application known as “Twitter“, which is known for limiting its users to sending messages of only 140 characters out to other users of the application who “follow” them. The leader of the known free world crafted such a message, which I’d like to present here to show you that there may be a secret hidden within this short pseudo sentence:

Despite the constant negative press covfefe

The part that drew my attention, and the attention of Twitter users worldwide, and of late night hosts, and comedians, and Facebook commenters, was of course that last word of the message, covfefe. It’s not actually an English word (though it might kind of mean “fear of a pregnancy” in Samoan, and some people claim it might mean “I will stand up” in Arabic). But White House press secretary Sean Spicer said, “the president and a small group of people know exactly what he meant,” and I’d like to bring you into that group.

One of the first things I was taught when I learned to read for the first time was to use context clues. So what context do we have? The opening of the thought is of a negative nature – I mean, he actually uses the word negative. Though he notes the animosity, “despite” also alludes to something that overcomes that negativity or happens anyway. And if you’re familiar with the president’s tweets, or watch the news, you’ll find it no surprise that the president is feeling this enmity from the press; he has not historically said very nice things about journalism, reporters, or the news in general. They, in turn, have generally not bent over backwards to paint him positively (whether you agree with that characterization or not, it’s true).

So what does this context do for us? How can we get at the true meaning of “covfefe”? I’ll admit I had to do a bit of research myself, but hopefully after I walk you through the steps I took you’ll see what I do now. 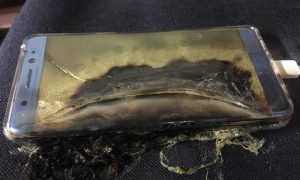 At this point I couldn’t be more happy about my progress with this breakthrough until I reminded myself how simple it was, and how many others probably came to the same conclusion much faster than I did. But to make sure those as slow as me don’t waste the kind of time I did putting two and two together let’s do a quick refresher: Faraday efficiency is simply a way to measure losses when electrons or ions participate in unwanted side reactions. It’s commonly used in the science of batteries. Remember when all those phones started to catch fire and burn people? That’s where the electrons that were supposed to be used for electricity in the phone were instead lost to heat energy due to explosions.

Now we’re on the home stretch: the picture is nearly painted. It’s like when you only have a handful of puzzle pieces left and all you have to do is put them in the only possible places they can fit.

The Co of the Fefe

The last 2 elements obviously combine to evoke thoughts of loss and destruction. Faraday efficiency is practically science’s own version of holding a grudge. It counts the amount of loss that has occurred and doesn’t let us forget it. And iron doesn’t need anything to go wrong for it to degenerate and fall apart: just the presence of water and air can turn a beautiful, shiny piece of metal, useful in all sorts of applications into a brown, flaky mess, unfit for anything truly practical.

That idea shone light on the other side of the “versus” in “covfefe” which, as crazy as it may sound, stands for ‘co’. It’s apparently opposed to the negative ideas of loss and destruction; otherwise it would have been “coafefe,” meaning “co AND fefe.” But it definitely says “covfefe,” so “co” has to oppose these other forces.

How does “co” fight the ideas of loss and destruction? “Co” is an English prefix meaning “coming together”- such as in co-operate or co-pilot. Is there anything else it could be? It is the simplest and starkest antagonist to “Faraday efficiency-Iron” that I didn’t have to come up with a second option. All the better because anything else would fall short of the beauty contained in this made up word at the end of a presidential message to his constituents.

Let’s go back to the full tweet, now edited to include the lengthened form of ‘covfefe’.

Despite the constant negative press [co versus Faraday Efficiency_Iron]

Again, if it is all too simple for you, go ahead and don’t worry about reading the rest of the article. But, just to be 100% clear on what this shorthand means, I’ll lay the rest of it all out in its simplest terms. Even though the president feels constantly attacked by the media, the battle to come together against the grudges of loss, destruction, and enmity still rages. That means a struggle continues for peace, despite constant messages that would suggest otherwise from the media! Now that’s a message I can get behind.

cov•fe•fe (n): A continuing struggle for peace, despite constant messages that would suggest otherwise from the media!

But, as easy and entertaining as it is to make fun of trending topics such as the true meaning of covfefe, it’s important to keep in mind how we should react to such trends as Christians, regardless of our personal opinion of people like President Trump and the desire to ridicule the people we don’t like about their silly mistakes. In all seriousness, I doubt that ‘covfefe’ is anything more than a typo; and, unfortunately, the struggle for peace between the President and a lot of things is probably not going to be over soon.

And making fun of him and talking poorly about him might not be the most effective use of our time or energy as Christians: you can certainly talk to people about whether you think the things President Trump does are right in the eyes of God, but more effective would be to pray for this troubled man. The president has a lot of weight on his shoulders, and he openly admitted that it’s more than he expected. He’s scared, and turning to anyone that will tell him what he wants to hear. Let’s pray for a peace to settle his mind and help him see clearly. Perhaps, without fear clouding his view of the world, more well-informed decisions could be made.

We have had enough ‘fefe’.

God will be glorified by a scared, reactionary old man in the White House, or by a level headed one that measures his words and actions carefully; even if the latter may make our lives a little easier. Again, let’s pray for the ‘co’ part of ‘covfefe’ to win – because we have had enough ‘fefe’ and could use some more togetherness.

Repay no one evil for evil, but give thought to do what is honorable in the sight of all. 18 If possible, so far as it depends on you, live peaceably with all. Beloved, never avenge yourselves, but leave it[a] to the wrath of God, for it is written, “Vengeance is mine, I will repay, says the Lord.” To the contrary, “if your enemy is hungry, feed him; if he is thirsty, give him something to drink; for by so doing you will heap burning coals on his head.” Do not be overcome by evil, but overcome evil with good.

Thanks for reading Redeeming Culture. Whatever you think “covfefe” means, we hope you’re in prayer for our country and world.

Previous articleWho·ology – S10E08 The Lie of the Land

Next article Oh! The Horror... | of Slaughtered and Transformed Masculinity