The sky is falling!  Christians are an endangered species!  Controversial stands on topics like abortion and homosexuality are turning people away from the faith in droves!  Facebook and Twitter are awash in anger against the faithful!  Head for the hills!

Christian or not, you can’t escape angry anti-Christian sentiment on Facebook and in real life.  Especially if you live in Indiana, or any of the other states that were engulfed in flames about laws said to protect the rights of Christian business owners.  The lions are circling, and it’s time for Christians to circle the wagons and prepare to fight! 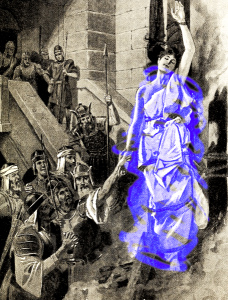 Christianity is undoubtedly losing in the polls.  While not dying, a study released by the Pew Research Center showed a 7.8% drop in the percentage of confessing Christians in the US since 2007.  This doesn’t lose us first place (it doesn’t even drop us below two-thirds of the population) and doesn’t mean that actual Christians are going away, but it does validate a trend that anyone with a Facebook account could tell you: Christianity is less popular in the United States than it’s ever been.  Following a path that most of Europe trod in the 20th century, American Christianity seems to be giving way to a secular atmosphere.

To be perfectly clear, though, this isn’t persecution.  We enjoy a lot of freedoms and privileges as American believers that are unmatched throughout Christian history.  No one is throwing us in the ring with lions or burning us at their backyard barbecues.  Attending church is not currently illegal.  Instead, people simply don’t like us.  This is not persecution, it’s disfavor.

For real persecution of God’s people, it’s easy to point to the Old Testament.  Over and over again His people were hurt and killed, but for true persecution the best place to look is 2,600 years ago- the Babylonian Captivity, as described in the books of 2 Kings and Jeremiah.  After being conquered years earlier, the people of Jerusalem were taken into captivity in Babylon by King Nebuchadnezzar after a failed uprising.

In this dark time, while God’s people would probably have preferred to fight back or mope, God had other plans, telling them through the prophet Jeremiah,

“Thus says the LORD of hosts, the God of Israel, to all the exiles whom I have sent into exile from Jerusalem to Babylon: Build houses and live in them; plant gardens and eat their produce. Take wives and have sons and daughters; take wives for your sons, and give your daughters in marriage, that they may bear sons and daughters; multiply there, and do not decrease. But seek the welfare of the city where I have sent you into exile, and pray to the LORD on its behalf, for in its welfare you will find your welfare.”

“Don’t just set there wishing your captors would be struck down.  Make that city better in My name.”  Despite being captives (or maybe because of it), God was accomplishing His will through His people, and spreading His glory through persecution of His people.

The Seed of the Church 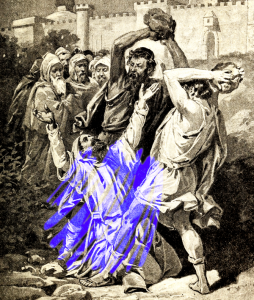 Like Israel in the Old Testament, persecution was often leveled at the believers who gathered in worship of Jesus.  As we discussed in our recent podcast, God does occasionally “throw a rock” to shake up His people, and in this case the rock was literal; the stoning of Stephen in Acts 7 spurred the new believers into action.

After Jesus ascended into heaven, they seemingly ignored His final command to be His witnesses “in Jerusalem and in all Judea and Samaria, and to the end of the earth.” (Acts 1:8 ESV)  Instead, they were simply sitting on their haunches in Jerusalem.  When Stephen was killed (in Acts 7), it was the spark they needed to scatter (in Acts 8) and finally become the witnesses Jesus intended them to be.  As Christian thinker Tertullian wrote in the 2nd century, “the blood of the martyrs is the seed of the church.”

And that’s hardly the last time this has happened.  Over and over in history, when persecution happens, the Church of Jesus grows and spreads out; The Romans persecuted Christians, and they spread all over Europe.  Persian persecution in the 4th century spread Christians to India, Arabia and central Asia.  Muslim persecution in the 7th century pushed Christians into China.  Even in the modern day, extensive government actions against Christians in China and North Korea have not shrunk the size of the church, but potentially doubled it over the past ten years (though exact numbers are sketchy).

Sadly, it seems that the inverse is also true.

In nations such as the United States, which provides religious liberty to all citizens and has been identified widely as a “Christian nation”, the numbers of Christians are dropping.  In fact, the USA is now receiving the most missionaries out of all nations; by percentage of population, we’re barely sending enough to stay in the top ten.  Saying you’re a Christian without any real belief is getting less and less popular, likely accounting for the drop in survey results in recent years.  And the mainline church in America is becoming increasingly complacent, abandoning key doctrines or boldly taking up the mantel of laziness.

Which begs the question…would the church in America be stronger if people were shooting at us?

In Defense of the Lions 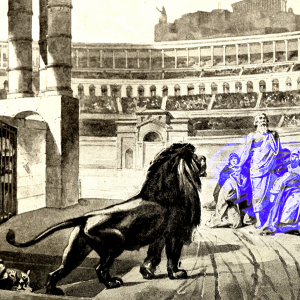 The American Religious Freedom laws were pitched as a battle against God, but Jesus never promised us that we would not be persecuted.  Quite the opposite, in fact; “If you were of the world, the world would love you as its own; but because you are not of the world, but I chose you out of the world, therefore the world hates you…If they persecuted me, they will also persecute you.” (John 15:19-20 ESV)

He never promised us religious freedom, nor did He command us to fight for it.  Instead, He told us “Blessed are those who are persecuted for righteousness’ sake, for theirs is the kingdom of heaven. Blessed are you when others revile you and persecute you and utter all kinds of evil against you falsely on my account.” (Matthew 5:10-11 ESV)  Now, I am not advocating in favor of persecution.  But I wonder if the reason that Christ warned us it was coming instead of telling us to fight against it was the same reason He commanded us to go and call all the nations to repentance: to spread His glory around the world.

So what if we didn’t circle the wagons?  What if we refused to fight?

What if we prayed for and sought the good of our cities in our exile?

What if we were His witnesses to the end of the Earth?