When I was younger, Christmas was when my parents would buy me the latest Pokémon game, and some of my favorite December memories as a child were of playing my brand new copy of Pokémon Red or Gold in the car, riding through a snowy landscape on the way to my grandmother’s house.  Whenever the weather starts getting cold, I get the hankering to catch monsters and pit them against each other in battle.

This past February, though, an anonymous Australian Twitch user and Pokémon fan came up with a new way to play the game: a somewhat bizarre social experiment called Twitch Plays Pokémon.    The world’s first glimpse was a bit strange – a seemingly-normal game of Pokémon: Red Version on the left, while usernames scrolled up the right.  Then people noticed that the player was a bit…spastic.

What the world soon discovered was that this game was not being played by just one person, but by every single person who was commenting in the feed.

It wasn’t long before gaming news sites picked up the story, and a legend began to be formed out of the metanarrative.  See, as a result of the hive mind taking over this poor protagonist’s every action, Red’s seemingly-random actions seemed to have meaning to them.  An item he attempted to access over and over became the key to reviving a long-sleeping god, whom he was “consulting” for aid.  A powerful monster who was inadvertently deleted from the game became a martyr, lost too soon.  Nicknames entered by the spastic controls of the thousands of players were “translated” to become a beloved name: “JLVWNNOOOO” was really “Jay Leno”, beloved rat; “ABBBBBBK (” was “Abby”, the poor fire chameleon cut down in her prime. “AAJST(????” became “Apollo Justice”.  And (my personal favorite) “x(araggbaj” became “Cabbage, Seed of Hope”.

Amid the names and legends, though, some deeper themes emerged.

Overwhelmed by the Voices

Red, the protagonist of Twitch Plays Pokémon, as well as all of the protagonists of the games that followed, was portrayed in fan art and fiction as being deeply troubled by the entire experience.  The commands of thousands of users flooded his mind like so many voices, causing him to become suddenly frantic and violently out-of-control.  Though many players had the best of intentions for Red and his team of Pokémon, various obstacles – narrow passageways, puzzles requiring precision, and sometimes even the bad actions of “trolls” attempting to derail the entire game – caused the “voices” in Red’s mind to keep on coming, giving him incessant and sometimes contradictory commands.  In most of the metafiction about the game, this drives Red nearly (or even completely) insane.

But as funny as it can be to watch, this hit me depressingly close to home after a few days.  In this world, there is no shortage of voices to listen to; family, friends, coworkers, and society in general have an unprecedented ability to speak to us nowadays, and listening to them all will get us nowhere.  We’ll find ourselves spinning in place, backtracking, and failing our closest friends if we let them all have say over our lives.

Luckily, our life is a little bit like Pokémon; when there’s only one player, the process, goal, and path are much clearer.  And in our life, the Player is also the one who wrote the game.  He knows how to beat the game perfectly. 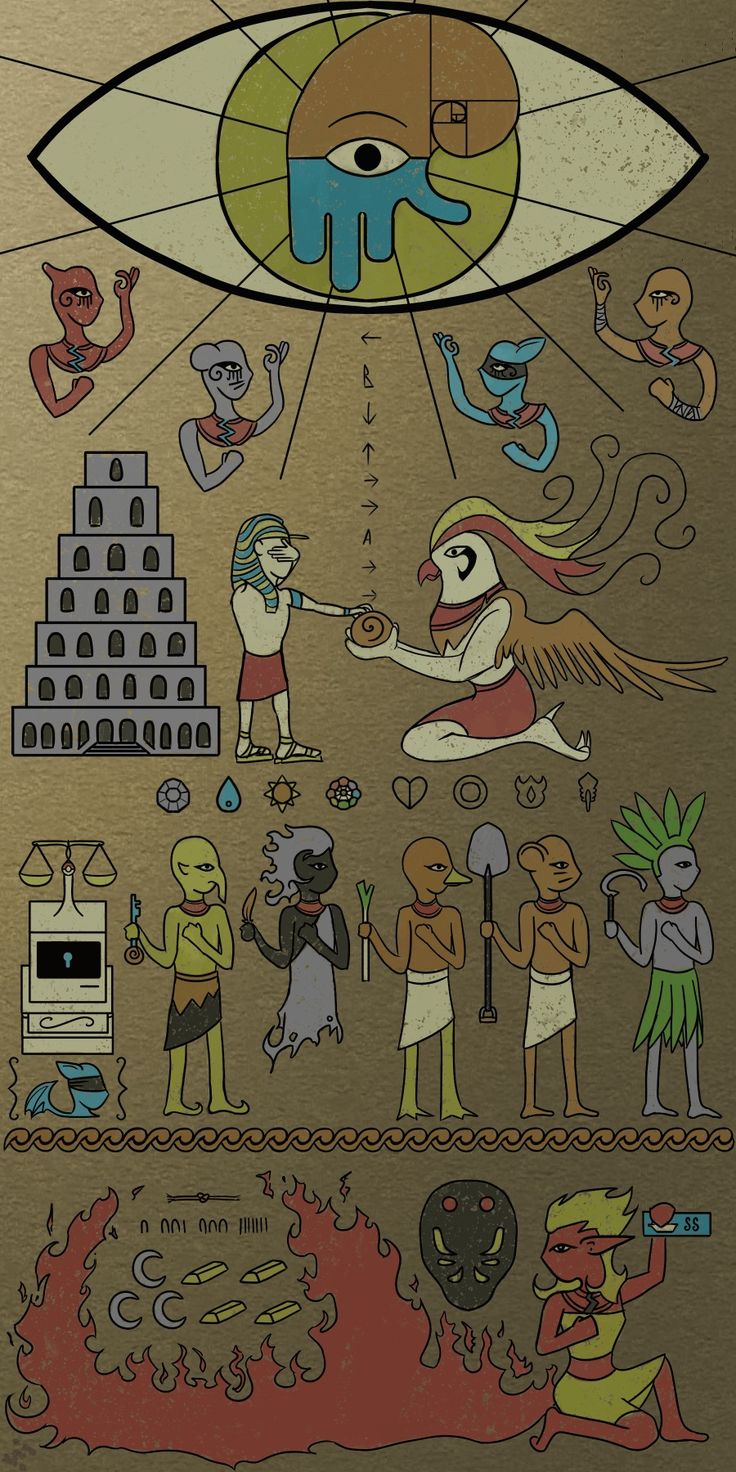 Shortly into the game’s popularity surge, players and observers began to create a “metanarrative” of mythology and legends inspired by the events taking place.  One of the most overriding was a growing legend about a god who would be awakened eventually, who was consulted by checking with the “Helix Fossil” over and over, an item which could be used to “resurrect” an ancient Pokémon but could not be removed from the player’s inventory in any other way.  “Lord Helix,” as he came to be known, became an omnipotent and all-knowing deity who was locked in eternal battle with the evil Lord Dome, with Red as their unwitting pawn, until Helix was finally resurrected near the end of the run.

It’s interesting how the lore of “Lord Helix” began to flow over into the real world.  When the creator of Twitch Plays Pokémon introduced a new game mode called “democracy” which allowed users to vote on a move, rather than sending them all at once, players imagined this to be caused by the devious influence of Lord Dome and saw it as the will of Helix to riot against democracy in favor of anarchy.

The famous theologian John Calvin famously said, “The human heart is an idol factory… Every one of us from our mother’s womb is an expert in inventing idols.”  In a rather lighthearted way, Lord Helix proves this to be true.  The world of Pokémon doesn’t explicitly mention a god, but through the confusing actions of Red, the players and observers invented one for it.  Our hearts long for a higher being, a purpose, a reason for life to be the way it is; in the world of Twitch Plays Pokémon, they invented it.

The true God came to earth, died and was resurrected nearly two millennia ago; we celebrate that arrival in two weeks.  But unlike that imaginary fossil, Jesus Christ guides and leads us through a simple, loving leadership…not a cacophony of insanity as in Twitch Plays Pokémon.

Guys, we need to beat Misty 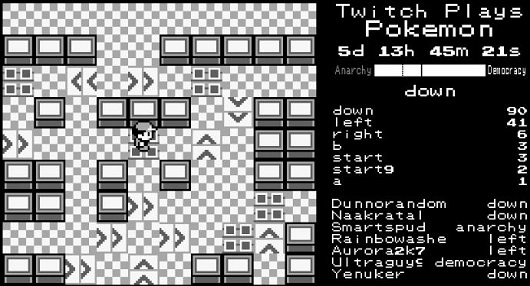 One of the most hope-inspiring parts about Twitch Plays Pokémon is that they actually succeeded.  And not just once, either; since February 12, 2014, the hive mind has successfully defeated each of the ten main-series Pokémon regions.  Through brute force and cooperation the players managed to defeat Misty and hundreds of other opponents in the games.  It was impressive to watch and beautiful to be a part of.  Despite in-game obstacles, out-of-game trolls and riots, and some brutal infighting, the hundreds of thousands of people who helped Red and his successors win managed to become and remain a coherent group, out of which has flowed beautiful stories and artwork.

This doesn’t have to be the only time we see such an impressive display.  In the book of John, Christ tells us that “all people will know that you are my disciples, if you have love for one another.” (John 13:35 ESV)  In this world, uniting love can seem to be in short supply, which makes events like Twitch Plays Pokémon all the more amazing for their impressive actions.  But as God unites His people, He will continue to grow them together.  He alone has the power to do it.  And despite those among us who would seek to derail God’s amazing plan, it will not be destroyed – so stay together and be a part of the amazing work He is doing. 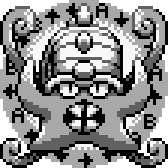 There are many more lessons that can be gleaned from Pokémon in general, and from Twitch Plays Pokémon in particular.  Please let us know what parts of the Pokémon phenomenon have really grabbed your heart and soul by the D-pad in the comments below or on Facebook, and keep an eye on our social media for some fun game events that we have in the works!

If you’re a Pokémon fan (or want to see what 121,000 people find so fascinating), you can pick up one of the latest entries in the franchise, [amazon text=Omega Ruby&asin=B00KI2OZ9M] or [amazon text=Alpha Sapphire&asin=B00K848IH0], on Amazon right now.  Buying it through one of these links helps support Redeeming Culture at no additional cost to you.  Thank you!

Next article #044 - Mockingjay Part 1 and the Power of Propaganda