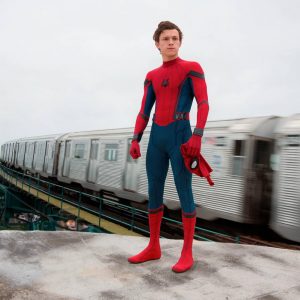 The newest edition to the Marvel Cinematic Universe (MCU) is Spider-Man: Homecoming. Tom Holland as Peter Parker—your friendly neighborhood Spider-Man—shows great range throughout the film. In one scene he perfectly captures hanging out with high school buddies, next he portrays the nervous feeling you got before going to a party, and he even has a convincing cry that—spoilers—doesn’t involve Uncle Ben dying. In fact, Uncle Ben is barely alluded to in this take on the arachnid avenger, which may be due to two previous versions that revolved primarily upon that particular element of his character still in the audience’s recent memories. There is no doubt that Tom Holland is a home run pick to play our latest web-slinger; another great choice in a long list of fantastic casting decisions made by Marvel. 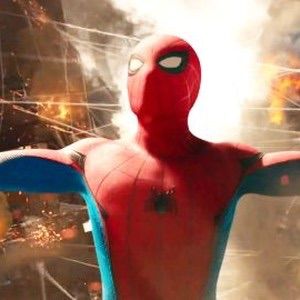 There were some pitfalls in this latest story, where I wish the MCU would have stepped up just a little bit more to create a more mature story; but overall, the movie was another solid installment. There is no memorable music beyond the orchestral version of the original Spider-Man theme during the opening titles. There was a little bit too much low brow humor in it that didn’t quite land, but I’ll chalk it up to the poor taste of high schoolers that they were trying to recreate, a la gems like “penis parker.” It was cute how people thought Aunt May was attractive, but the porn joke didn’t add anything to the experience in a good way for me. And the secondary themes just seemed like smaller versions of the theme that Marvel has been dealing with for more than three movies now—property destruction and endangering civilians while acting heroic on your own terms. Even so, it is a good movie worth your time, but there’s always room for improvement, even in the house that Iron Man built.

So without the dead uncle or the famous line about great responsibility, what themes does Homecoming decide to tackle? Well, we get a little spill-over from last year’s Captain America: Civil War, about Tony Stark being concerned yet another person will get hurt on his account. But the main drive is Peter Parker feeling left out and waiting ever-so-impatiently to step into this great new life fighting alongside the Avengers. He has tasted the thrill of swiping Cap’s shield out of the air and tripping a giant Ant-Man (“like in that old movie”), and he has trouble coming back home to high school and everyday life. 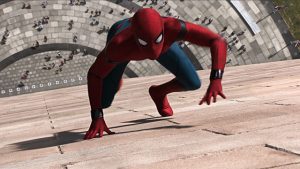 He begins to neglect his intellectual extracurricular activities, just in case Iron Man calls. He leaves lots of messages on Tony’s driver’s cell phone about his heroics around town, and always lets him know that he’s ready if Mr. Stark needs ANYTHING. There are a couple of moments where they mention that if Peter is nothing without the suit then he doesn’t deserve it, but I feel they short-changed this one more in favor of the “let me play too” theme because worthiness to wear the suit led to the best moments in the film. There are also the typical threads about hiding your secret identity from your best friend, high school crushes, and getting used to new powers as you would expect; but that’s about it for Peter’s journey.

The villain to our newest Spider-Man is a construction foreman who finally catches a break cleaning up the city after the events of Avengers. Then, for reasons beyond his control, the job is lost to a subsidiary of Stark Industries so that the unsafe wreckage can be removed by more qualified professionals. After investing everything he has left in this job, the construction worker decides to take some of the technological refuse and make a living selling it as weapons around town so he can still provide for his family. Another case of doing the wrong thing for the right reasons, but a relatable villain. You might say he even redeems himself with his actions near the end of the movie.

As far back as we can remember, we can all relate to Peter’s situation. At one time or another we all wanted to sit at the big kids table, play on the varsity team, or prove that we could do that thing we know would get us recognized for what we’re capable of. It’s something that drives us crazy, being held back from the greatness we could achieve…and receive. In fact, Tony aggravates this feeling by giving Peter a suit with safety protocols labeled “training wheels,” literally holding him back from access to everything the suit has to offer.

Of course, Peter finds out that he really does not know everything about the suit—or even want to use some of its features, like “insta-kill” mode. But it’s not enough that we believe ourselves capable of great things, we want others to believe it too. And not just any others; it has to be the others that matter. Peter doesn’t seem to struggle with keeping it a secret from everyone that he’s Spider-Man. Aside from brief struggles with using Spider-Man to get the attention of a girl, he only wants Tony and the rest of the Avengers to accept him as one of their own. He wants more than anything to be accepted by Tony and noticed by his crush, and the admiration of anyone else does not register among these lofty goals.

I’m cool whether you know it or not

During Homecoming, we do get to see Peter grow as an individual beyond the expectations of Mr. Stark, and to embrace his own greatness without relying on anyone else or his suit to vindicate that for him. It’s a difficult thing to feel like you are worth noticing and not getting any attention for it.

Luckily, as Christians, there is a way to get that attention we crave. God is ready and willing to listen to us, to watch us and to give us glory through Himself. At the end of John chapter 5 we see Jesus talking about this very thing. In verse 44 he asks how the crowd can believe because they are getting that attention they crave from humans. So it is possible to feel satisfaction when you are acknowledged by people, but it is a lesser satisfaction that just robs us of a deeper one.

It is the same type of experience Peter goes through in seeking and gaining acceptance by his hero Iron Man. But shortly thereafter he finds that satisfaction in himself is of more worth. He even relents that he may need some more time with smaller problems and probably the protocols of his suit at home before he devotes himself totally to the Avengers and their missions. That humility he shows could have moved him two steps at once. Being humble enough to admit that you may not really be the greatest is a huge step in giving you space for some perspective to see where you should be looking for that recognition and acknowledgment. But either way, he lands in a better spot than he started.

The Weight of Responsibility

The villain of the story really is trying to make an honest living to provide for his wife and daughter at the beginning of the film, when he loses everything for no good reason that he can see. So he looks for the easy way out and finds one.

It is always easier to justify something we know is wrong when it is to achieve admirable goals. Parents and spouses know to what extents they would go to in order to protect their loved ones and prevent anything bad from happening to them, but there should be something to stop us from going too far. For our bad guy, all that really happens is he sets himself on course to no longer provide for his family, but also eventually get caught and no longer be with them due to incarceration.

God can only entrust our loved ones to us if they were His in the first place.

This may be one of the hardest truths in the Christian walk, but in times like these we need to remember that our loved ones are not our own. True, they are entrusted to us by God the Father, but He can only entrust them to us if they were His in the first place. If we are doing all we can to provide for our family and protect them under His laws and guidance, He can take care of the rest. It is the ultimate test of faith to leave a loved one vulnerable to hunger or pain when you could do something, anything, even if it means acting against one law or another. Take heart, Christian; God loves them more and better than you; even if it doesn’t feel like it sometimes.

In probably the best after credits sting in the MCU, Captain America makes an appearance and starts to talk about patience; how sometimes we get to the end and wonder whether it was all worth it?

I think this encapsulates both the hero’s and villain’s journey through this film. Was waiting to be ready to join the Avengers worth it? Was resorting to stealing instead of waiting for another honest job worth it?

And for us, is that immediate pleasure, recognition, and stability worth it—or would it be better to wait for something greater?

Thanks for reading Redeeming Culture. What did you think of Spidey’s threeboot? Tell us below!

Previous articleOh! The Horror... | of DissolutionNext article Reel World: Rewind #018 - In the Mood for Love