What if a character you always thought was just comic relief harbored a dark, hidden reality?

What if the clumsy Gungan you cringed at on-screen was really a cold, calculating mastermind?

What if… Jar Jar Binks was a Sith Lord, maybe even stronger than the Emperor?

Strap in, folks. We’re headed to the “Weird Side of the Internet™” again.

Of course, if you haven’t seen the Star Wars prequels or haven’t seen them in a while, you may want a quick refresher on Jar Jar: introduced in 1999’s Star Wars Episode I: The Phantom Menace, Binks is a tall, lanky Gungan from Naboo, portrayed as kindhearted but quite clumsy.

Jedi Qui-Gon Jinn and Obi-Wan Kenobi rescue Binks, who accompanies the duo as they meet Queen Amidala of Naboo and escape to the desert planet Tatooine.  He’s with the Jedi when they meet Anakin Skywalker, with whom he becomes close friends as they continue their adventure to Coruscant and back to Naboo.  In the battle that concludes the film, Binks’ apparent clumsiness results in the destruction of many battle droids.

Even before the film’s release, Binks was widely lambasted in the media as bad comic relief at best, or a racist stereotype at worst.  He became a mascot for the weakness of The Phantom Menace and, eventually, the prequel trilogy as a whole; the focus on characters that fans don’t care about, over-reliance on CGI in a universe previously characterized by its “used-world” aesthetic, and sub-par writing.

The backlash of the fan base was so strong that Lucas drastically reduced Binks’ importance in 2002’s Attack of the Clones, restricting him to only a handful of scenes.  Jar Jar, now a delegate from Naboo, proposes that the Galactic Senate grant Chancellor Palpatine the wide-reaching emergency powers he needs to eventually become Emperor.  And by 2005’s Revenge of the Sith, Binks’ presence in the film was less than a cameo.

And for ten years after the release of Revenge of the Sith, everyone thought that the story was just that simple.

Then, on October 30, anonymous Reddit user “Lumpawarroo” presented his fascinating theory to the world: far from being a throwaway gag character, Jar Jar Binks was originally intended to be the secret villain of the entire Star Wars franchise. The theory took the world by storm, garnering over 35,000 upvotes on Reddit (by the time of this writing), a “trending stories” slot on Facebook for days, and mentions in Entertainment Weekly, Wired Magazine, The Guardian, and even The New York Times. Though pooh-poohed by George Lucas himself, the theory has been called “remarkable” by Episode VII director J.J. Abrams, and obliquely (though perhaps jokingly) confirmed by actor Ahmed Best, who played Binks in the prequel trilogy.

His theory boils down to this:

But, Lumpawarroo contends, Lucas “chickened out”; the public hatred of Jar Jar made him reconsider his entire plan, all but eliminating the character and hurriedly replacing him with Count Dooku as the main antagonist and Yoda’s final enemy in Attack of the Clones.

Revenge of the Monomyth

The Darth Jar Jar theory insists that Obi-Wan Kenobi’s sudden history with Count Dooku is an attempt to cover up the hole left by Jar Jar Binks’ sudden removal from the storyline.  This might seem far fetched, but we at Redeeming Culture are all about mirrored metanarrative!

The “metanarrative” is the story behind all other stories, and we’ve been talking about it from day one.  We’ve talked about side characters on The Hero’s Journey before, but this is an interesting take on Joseph Campbell’s monomyth: instead of talking about the hero, we’re looking at a supporting character who looks at first glance like a jester or fool. 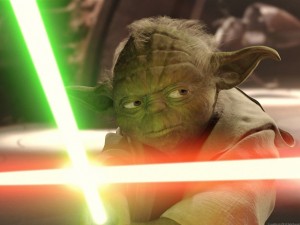 So what does this look like in the Christian life?  How does this reflect God’s story of creation, fall, redemption, and restoration?  Who is our “Darth Jar Jar” – and who is our Yoda?

It might be Satan; in our culture, he’s so often portrayed as a buffoon in a red leotard with horns and a forked tail.  But his deviousness and mastery of manipulation is what got humanity kicked out of Eden in the first place.  He and his suggestions might seem harmless, but they lead to destruction without fail.  And were it not for his clash with our Yoda, namely Jesus, we would all still be laboring under his thumb and destined for destruction.

Or it might be sin in general.  Our sick, diseased, sinful minds can see it as manageable, or even harmless.  But sin leads us all to death, rearing up against us with power beyond our capability to resist.  That’s why we need our Yoda – Jesus – to step in and take the blow so that we can be freed to worship Him.

But I wonder sometimes if the Darth Jar Jar in our story isn’t…us.

Think about it.  We’re so often in the villain category of our personal monomyths, but we cast ourselves in the “clumsy comic relief” role.  We have an impressive ability to lie, cheat, and manipulate.  Our goal is to ultimately be in charge of our own lives.  And all the while, we might just be annoying those around us.

And in this story, our Yoda is…Jesus again (I hope you’re seeing a pattern).  Through His death, He shows us that the path we’re walking leads to the dark side, giving us an opportunity to see reality as it is, and giving us a new hope that someday He will dethrone us, fully sanctifying us as He installs Himself on the throne of our hearts.

As you count down the days to The Force Awakens, look out for the ways that Darth Jar Jar is intersecting with your life.  And try to discover who the villain really is.