They Won’t Let You Remember: Men in Black
July 2, 2017 by David Atwell

(Though it probably doesn’t remember, having been “flashy-thinged” too many times.)

Still, as fun as it is, it has a deep side to it, too.  Most of it revolving around the concept of what we know.

Men in Black, of course, is about a secret organization that keeps tabs on alien activity on Earth.  When K is telling this to a shell-shocked Edwards, who has just learned that extraterrestrials are real.  “Why the big secret?” he asks.  “People are smart. They can handle it.”

“A person is smart. People are dumb, panicky, dangerous animals and you know it,” K replies.  He continues:

My heart loves this story because my heart lived this story.

If you’re a Christian, you probably had this experience: one moment, you knew that God’s story had nothing to do with your own.  You knew that you didn’t need a savior.  Maybe you even knew that He didn’t exist at all.  But then, with all the weight of a foregone conclusion, He spoke directly to your soul, replaced your heart, and left you a little bit shell-shocked.

It reminds me of me.  My heart loves this story because my heart lived this story.

The Only Way to Get On With your Happy Life?

There’s always an Arquillian Battle Cruiser, or a Corillian Death Ray, or an intergalactic plague that is about to wipe out all life on this miserable little planet, and the only way these people can get on with their happy lives is that they DO.  NOT.  KNOW ABOUT IT.

K’s speech here, like his recruiting pitch to J, has always fascinated me.  It took me a while to figure out why, but then I realized: my heart loves this story because I lived it, too.  In fact, I fall into it all the time.

The way I see it, the villain of my story likes to run around my mind disguised as an ordinary thought, or in a suit that makes me think that it’s just a “reasonable concern.”  It drops the weight of my sin around me like an explosion, and suddenly the depth of God’s holiness and goodness doesn’t seem like the beautiful truth that it is any longer.  Instead, it seems more like a threat.

So I try to deny that beautiful truth that God showed me on the day He broke into my life.  I try to ignore the reality that I’m walking with God in a bigger world.  I try to forget and get on with my happy life by ensuring that I DO.  NOT.  KNOW ABOUT IT. 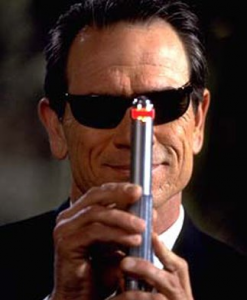 Thanks for reading! If God has blessed you through Redeeming Culture, we’d love to hear about it. Please let us know in the comments or on social media.

Thank you. Now, unfortunately, I do have to do this…

The words you read were not a blog post. Swamp gas from a weather balloon was trapped in a thermal pocket and reflected the light from Venus…