This extended review is about Star Trek, the 2009 film, and as you might expect assumes that you’ve seen it. Please be aware that there will be spoilers below.

There have been wars shorter than the Star Trek franchise; if you sat down to watch all six series and eleven movies, you’d be in that chair for 25 days. Better buy some extra popcorn. It’s lasted for 46 years now, surviving through ten American presidents, outlasting the entire Apollo program, and predating Star Wars by over a decade. But when the sixth series, Enterprise, went off the air in 2005 after only four seasons, there was this unshakable feeling that the franchise had lost something. Until J.J. Abrams blew the dust off in 2009.

Okay, all cards on the table. I’ve been a Trek fan since I was born. I understand the dynamic of Star Trek, and what it means to millions of fans all over the world. And I also understand what Star Trek truly is: Us, out there. 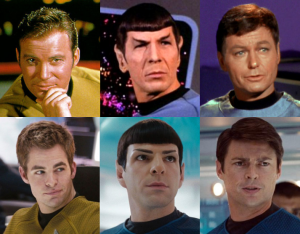 James T. Kirk, Leonard H. McCoy, and Spock are and always have been the true core of Star Trek. While other crews have come and gone, they’re the most recognizable and longest-lasting elements of the show, and as such are the obvious choice to be the core of the franchise reboot. As much fun as their interactions are, they really represent Us in their conflictedness.

Kirk is the Id of Freud’s model of the psyche. He’s the instinct, the driving force, the impulse power of the crew (Credit/blame to James Harleman for that particular joke). He’s our desire side, kept in check by the other two.

Spock is the Ego in Freud’s analysis. He’s concerned with logic, completely and utterly, and doesn’t understand Kirk’s human impulses. He can often come across as cruel and unfeeling (“The needs of the many outweigh the needs of the few”). Spock is our mind, kept in check by the other two.

McCoy is the Superego. The morality, the sense of right and wrong. He’s consistently angered by Spock’s cold calculations. McCoy is our conscience, kept in check by what is feasible and what is possible.

The three form a series of natural checks and balances, but the battles they play out on the bridge of the Enterprise are the same as the ones in our mind; in a sense, both in the old series and the modern film, they are the core of “Us,” boldly going where no one has gone before, with the phaser power (and indeed the duty) to fight our fears and win.

The War Criminal known as Nero

Star Trek has classically been about fighting our greatest fears. When the series was first aired, in the midst of the Cold War, that fear was the Soviet Union – embodied, largely, by a Klingon Empire. Since then, the fears of our world have changed, and we no longer fear a monolithic government as much as we once did. Now, our fears are the terrorists, the renegade who destroys billions to carry out his own vigilante retribution. Our fears are now encapsulated in Nero.

He truly is one of the most memorable villains, and that’s largely a result of his casual disregard for civilians. He destroys Vulcan with the same intensity and purpose that he destroys the fleet, essentially polarizing everyone. He doesn’t allow anyone the luxury of remaining neutral. And there’s no negotiating with him, no discussion – the only way to defeat him is to destroy him utterly.

The Bible talks about our enemy who is very like this. He represents only himself, saying “I will set my throne on high (Isaiah 14:13-14)”. He has no regard for civilians, devouring men, women, and children (1 Peter 5:8). And he has nothing to lose. He knows his defeat is imminent; his aim is only to cause pain.

Captain of the Enterprise

The hero of Star Trek is born in battle, and was never destined for smallness. Like Pike tells him, “Your father was captain of a starship for 12 minutes. He saved 800 lives – including your mother’s, and yours. I dare you to do better.” Kirk takes that dare.

Joseph Campbell would call this moment the “Call to Adventure,” and as viewers, we know that he’s supposed to end up as Captain of the Enterprise. But he can feel the tug of destiny, too – initially to prove himself (“Four years? I’ll do it in three”), then to save Earth (“Either we’re going down…or they are”). He becomes the sort of man who cares for his crew and develops a true sense of duty, as he was destined to.

We have a similar destiny. The Bible makes it clear that we’re at war. Born in battle. In John Eldredge’s book “Love and War,” he says that all of human history is “a love story, set in the midst of desperate times, set in the midst of war…[and we will] require immense courage and sacrifice.” The villain has removed from us the luxury of choosing to be a noncombatant. We cannot be neutral.

But while we’re commanded to take part in this adventure, we’re not the heroes. We’re not the man in the captain’s chair of this particular ship. In Matthew 28, our Captain gave us orders, and promised that He’d leave no man (or woman) behind in this mission, this endeavor – a great destiny that He previews for us in the book of Revelation.

Nero knows that Kirk’s destiny means his failure, though. So he tries to wipe it out. “That was another life,” he says. And he doesn’t progress with his self-elected “mission” until he’s sure that Kirk is dead.

There’s one problem with Nero’s effort to deprive the Enterprise crew of their captain, though; the timeline is rebuilding Kirk’s destiny. In a scene that was deleted from the script, Kirk and the Old Spock continue their discussion in the cave on Delta Vega.

SPOCK PRIME
Dr. McCoy would assert our meeting here is not a matter of coincidence…but rather, indication of a higher purpose.

SPOCK PRIME
Yes, he would. Perhaps the time stream’s way of attempting to mend itself. In both our histories, the same crew found its way onto the same ship in a time of ultimate crisis — therein lies our advantage.

Spock may not put profess to put much stock in the idea of a higher purpose, but destiny in this case cannot be denied. Whether Spock would admit it or not, like Simon Pegg (Scotty) said in an interview, “Destiny is stronger than time and circumstance. The crew is supposed to unite.”

Our enemy is seeking to destroy our destiny, too. Our success means Satan’s destruction; his loss and our victory is foretold in the book of Revelation, and he’s read that book, too. He’ll stop at nothing to kill our drive, warp our logic, and overwhelm our morality. He’ll render us ineffective in any way he can.

But his plan is just as flawed as Nero’s was. In Job 42:2, the Bible insists that “No purpose of [God’s] can be thwarted.” In fact, God will even use the evil schemes of the enemy to accomplish His plan. “For this light momentary affliction is preparing us for an eternal weight of glory beyond all comparison,” the apostle Paul says; “for those who love God, all things work together for good, for those who are called according to his purpose” (2 Corinthians 4:17, Romans 8:28). God’s glory is revealed even by the actions of an enemy aiming to destroy it.

Our destiny is for our desires, morality, and logic to work together to glorify God. Jesus said that Himself: “You shall love the Lord your God with all your heart and with all your soul and with all your mind” (Matthew 22:27). He calls it the first and greatest commandment; the warp core of life.

But how do we love the Lord? Many books and papers have been written on it, but He told us that, too. Our orders, straight from the Captain’s chair, are essentially to save lives, just like He did (Matthew 28:18-20).

Our Captain had a very unique destiny on this planet: to die. Like Kirk, he was born into a broken, fallen, falling-apart world; a villain tried to steal His future, but he made it to His destiny anyway. Unlike Kirk, that destiny was death on a cross to save us.

The story doesn’t end with that, though. That very same Hero then recruits us to work for Him, raising from the dead to secure our ability to be crew members on His ship. He comes to us when we looked like Kirk in the bar: near death, wallowing in our own blood, rejected and humiliated, beaten and battered, arrogant – completely unlovely. Romans 5:8 says that He called us to Himself while we were in that state. He recruited us when we were at our worst. Colossians 1:15-23 even goes so far as to call us hostile aliens before we meet God, and allies with Him now.

And He has given us a mission: to explore strange new worlds, to seek out new life – people who will be saved from their slavery to sin, and rise to walk in new life with Him – and to save the universe.

Find out more about or watch “Star Trek“: (IMDb/Amazon)