Anger Begets Anger; I Read it on a Bookmark
February 28, 2018 by CC Earnhart

We’d also like to warn you. There are spoilers ahead for Oscar-candidate Three Billboards Outside Ebbing, Missouri. You’ve been warned. 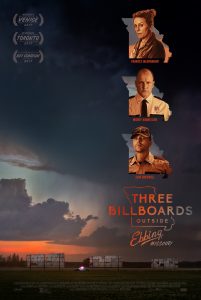 The title of the movie is Three Billboards Outside Ebbing, Missouri; as the title would suggest, the main conflict of the movie revolves around three billboards placed on a country road that no one uses anymore—billboards that cause a great deal of controversy in the small town nearby. The billboards were purchased by grieving mother Mildred Hayes, who wanted to keep her daughter’s rape and murder in the public eye in order to spur the police toward capturing the culprit responsible for her violent death.

Her anger at the police for what she feels is a lackluster job investigating her child’s death is drawn out alongside public outrage surrounding a racist cop who tortured a black suspect and was never punished. This is a story with few noble characters that blurs the concept of what true justice really means, and the thesis of Three Billboards is succinct and true; anger begets anger.

Mildred purchases the billboards at the beginning of the story with a simple yet powerful statement:

Raped while dying
and still no arrests?
How come, Chief Willoughby? 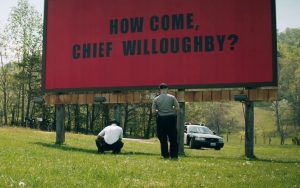 Immediately the outrage of her billboards spreads. Her son gets bullied in school, she gets a visit from the priest of the church she no longer attends, and even a visit from Chief Willoughby himself who implores her to understand that he is doing all that he can, going so far as to admit that he is dying of pancreatic cancer to try and sway her to remove the billboards. Mildred says she already knew he was dying, and it wouldn’t make the same statement if he was dead.

The three billboards even cause Officer Dixon, the man accused of torturing a black suspect, to arrest her best friend and throw a man out of a window, then beating him in the street outside of the police department. When the billboards themselves are burned, Mildred retaliates by burning down the police station and very nearly killing Dixon in the process. 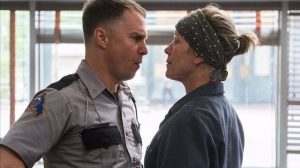 Humans desire revenge almost instinctively. If someone gets cut off while driving, they flip off the other driver, or scream impotently at the steering wheel while their children stare on, gape-mouthed. Someone pushes you, so you hit them. Even the smug feeling we get when someone gets the justice that they had coming to them—Karmic backlash—is a hint of the revenge that we so desperately crave.

Knowing that this is our nature, it is important to understand where that feeling comes from: everything should be fair.

“I Don’t Think Them Billboards is Very Fair”

We want the world to be fair more than anything else. Within our souls resides an innate longing for justice, spawned from the reality that there was a time when everything actually was fair.

Within our souls resides an innate longing for justice, spawned from the reality that there was a time when everything actually was fair.

Once, long ago, man and woman lived in perfect harmony with God. There was no injustice. There was only ever peace and the perfection that comes with communion with the Sovereign and Holy God.

Then man desired something greater than that perfection. We always want more than what we have; that is the truth of sin. That’s why when you flip off the driver of the car that cut you off, they slam on their brakes in front of you and total your car. It’s why when you get pushed, you hit them back a little harder. Because revenge isn’t the desire for justice; it is getting someone back for what they did to you, and actively pursing a little more for the sake of your own satisfaction.

From the beginning God set boundaries for us. He said “an eye for an eye, a tooth for a tooth” (Leviticus 24:19-20); meaning that He knew we would seek vengeance, because it is in our nature to sin, but he asked us to only take equivalently, rather than trying to appease that yawning, God sized hole in our hearts.

Samson is the perfect example of vengeance causing a person to spin out of control. He married a Philistine woman who betrayed him on the day of their wedding by giving her family the answer to his difficult riddle. In anger, he left her in order to kill thirty of her people. His wife was given to another man, and in his anger Samson burned down their fields, causing great hardship to the Philistines. The Philistines killed Samson’s wife and her family to get back at him, so he killed a thousand of their men. Samson’s story continuously escalates as he drives himself further and further from God- until he is cut off completely. (Judges 14-15)

Mildred wanted vengeance. Much like Samson, she allowed her anger to escalate her actions against the police that she saw as apathetic and uncaring. In the end, she learned that it wasn’t even the fault of the police that her billboards were burned down; it was the fault of her ex-husband. By blindly giving in to anger and prejudice, she committed a major crime that nearly killed a man—burning him in a similar way that her own daughter was murdered. 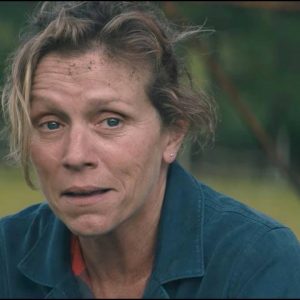 The cautionary tale that resides in Mildred’s story is that she never received true vengeance; the man who mutilated and violated her daughter was still out in the world, and she began to lash out against more than just the man who took her child. The movie leaves off with Officer Dixon and Mildred Hayes driving to Iowa, as they contemplate the murder of a man unrelated to her daughter who had possibly committed a similar crime. Mildred left her only living child to pursue vengeance on behalf of a child that was already lost and never coming back.

“If You Hadn’t Stopped Coming to Church, You’d Have a Little More Understanding”

Jesus tells us to forgive beyond the amount that is reasonable to our minds (Matthew 18:21-22). Forgive even when human logic tells us we should not.

He doesn’t tell us that only because forgiveness itself is righteous; it is for our own good that we forgive others. Where there is no forgiveness, there is sinfulness that separates us from God. Any sort of separation from God compounds the emptiness of this world and removes the hope that is given to us through salvation. As much as we might feel that killing the person who killed someone we love will ease the pain, it never can. Healing never comes with vengeance, as Mildred’s story shows us; because anger begets anger. 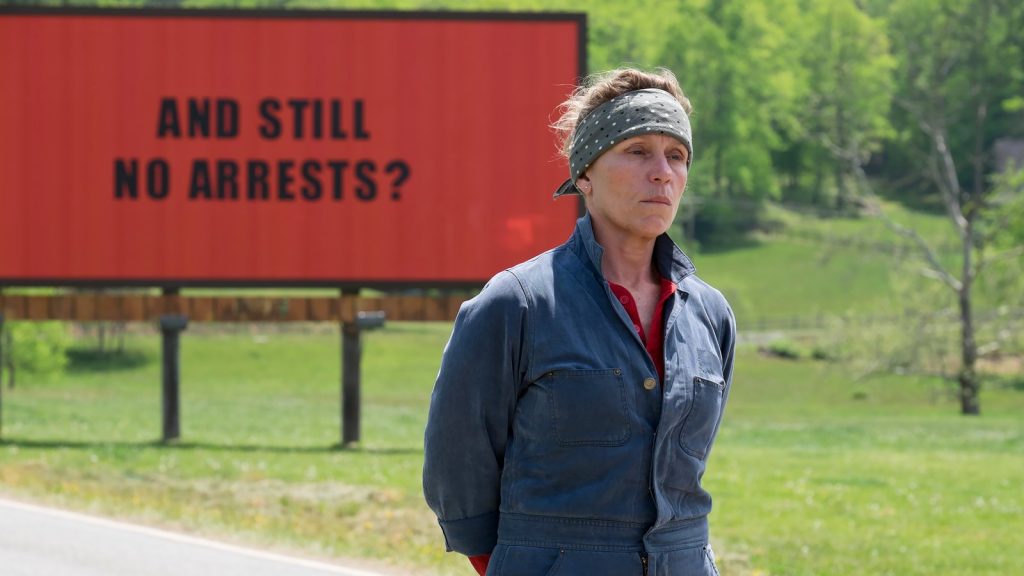 CC is a writer, film fan, and sometimes Tweeter. She also happens to be Ryan‘s wife.