When Steven Spielberg first read the script for The Post, he realized that “this wasn’t something that could wait three years or two years — this was a story I felt we needed to tell today.” 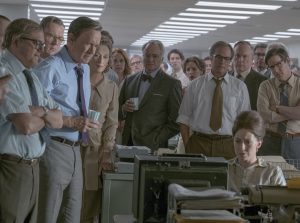 Watching the film, it’s clear why he thinks that’s the case; the fire under which newsmedia has been placed has become a fever, and whether you agree that they are “fake news” or not, the titular Washington Post is certainly experiencing that heat. We’re living in a climate that began in the days chronicled in this film, and the political disdain for the media is only getting hotter. It’s not a liberal story, or a conservative story; it’s a movie about the importance of a strong, free, independent press, which makes it a uniquely American story.

Spielberg’s urgency to tell this American story is explored in the film itself, through the lens of the Pentagon Papers and the Post’s publisher’s decision about whether or not to publish them. Like Graham and Bradlee, Spielberg had a duty to the truth.

A Duty to the Truth 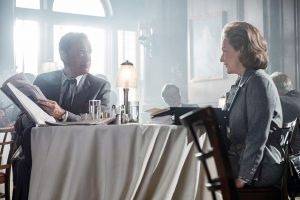 The publisher and editor of the Washington Post, played expertly (as if you’d expect any different) by Meryl Streep and Tom Hanks, wrestle throughout the film with the decision about whether or not to publish the Pentagon Papers, a series of leaked pages from a report about the Vietnam War and the secretive suppression of information about the war by four consecutive Presidents.

As damning as the words within the papers are, Kay Graham sums up the reality underpinning those words as she tears into former Secretary of Defense McNamara in his own house: even though they knew that the war couldn’t be won, they—he—still sent people’s children to Vietnam to die for nothing.

And if the war didn’t end, those deaths would continue.

We humans have a unique duty, a drive wired into our minds by God Himself: when we have the truth, we feel a responsibility to tell others that truth. Even at our own risk. Especially if people are being lied to. Definitely if the liars are trying to suppress the truth. And certainly if lives are on the line.

The Post reporters and editors have that responsibility: to save lives by telling the truth.

And so do those who believe in Christ. When cornered by high priests who sought to destroy them for what they were saying, the Apostles Peter and John said,

“Whether it’s right in the sight of God for us to listen to you rather than to God, you decide; for we are unable to stop speaking about what we have seen and heard.” 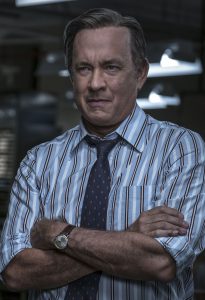 There’s no secret in the Washington D.C. of The Post that there’s a war going on. The Vietnam War has been in full swing for a decade and a half by the time the story begins, and national sentiment is not kind to the conflict. The secret lies not in the war, but in what the leaders knew about the outcome; not that there are people dying, but in what they’re dying for.

The Great War we’re fighting in is not a very well-kept secret. God’s Word talks about it. Children’s songs talk about it. We’ve even talked about it on this site. The conflict between Jesus and Satan isn’t new, and it isn’t a secret; it’s behind the veil, but we’ve been told everything about it– including who wins.

But the secret truth is that people are being sent to their deaths. Not just hundreds, or thousands, or millions, but billions marching merrily to their deaths in a war that spans the history of the entire earth; a battle that the powers of this world know they can’t win because they already lost it.

When Christ died on the cross to take away the power of death and of Satan, the final victory was won. On that day, the report was finalized: Jesus wins. So now every soldier of Satan who dies on the battlefield dies in vain. The prince of the power of the air is cast down; he lost, two thousand years ago.

The sting of death is sin, and the power of sin is the law. But thanks be to God, who gives us the victory through our Lord Jesus Christ. 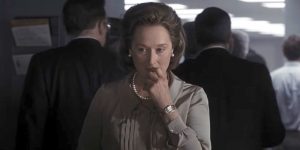 When Kay Graham decides, with finality, to go public with the truth they’ve been given, there isn’t resoluteness in her voice; she wavers and stutters her way to the decision. The decision is the right one, but it’s not easy; still, having made it gives her a new confidence.

Where before she allowed herself to be trampled by the men in the room, she’s now assertive; her character changes, and she’s immediately a more graceful and powerful person. She’s ready for her role as a check on the power of the government; quite timely, given the impending Watergate scandal that she’s about to reveal.

Expressing a secret truth can give us a boldness we never knew we had, and that’s something else God wired into our minds. The truth gives us the confidence to be a check on the powerful, and to take down the wicked.

What is our Truth?

Our Truth is not just a fact, not just a Word, but a Person. Our confidence comes from Jesus, the Son of God; who came to Earth to die, to end the war, and to save us in need. When the Truth became flesh, He called us to Him; and when the Holy Spirit came upon us, it gave us all the confidence to speak and publish the Truth, and to call others to repentance and faith; to do battle against the powerful evil which reigns in this world, and to be a check against the forces of evil.

The war is won. The victory is certain. And our power is the power of the Truth.

Thanks for reading Redeeming Culture. We hope you see the Truth in the pages of our magazine every week; if you have anything you’d like to say, we’d love to hear it.