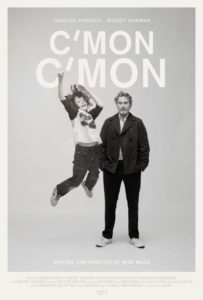 For those of you who follow film awards, for better or worse (like I do), you may have been fairly underwhelmed by 2021’s offerings. While there were certainly some notable films, it felt like there was a huge gap in both quality and truly noteworthy films. I assumed, coming out of another year of COVID, that we were just staring down another meager year for my favorite storytelling medium. However, after some digging, I realized that there were a number of truly great gems beneath the more popular award darlings.

C’mon C’mon was one of those gems. Receiving fairly little buzz, this film starring Joaquin Phoenix was incredibly moving and revelatory. After a blockbuster like Joker, I can see how a Phoenix-led film about the mundane interactions of a radio journalist hanging out with his nephew could sound rather dull. Not only did Phoenix knock this film out of the park, but I wouldn’t be writing about it if it wasn’t something that I thought was easily worth your time.

The magic of C’mon C’mon is in its perspective. While we are mainly following around Johnny (Phoenix) while he travels and records interviews with kids around the country, asking them questions about growing up and the world they live in, it is the perspective of Jesse (Woody Norman), his nephew, that becomes central. As adults, we’re so used to how we see the world that, even when asking kids about what they see, we filter their answers through the lens of what we believe is true. This can often lead to us hearing, but not really listening to, what kids have to say. While he spends time with his nephew, Johnny begins to really listen to how Jesse sees and engages the world because he isn’t just one of the kids from his interviews. Johnny is also a good listener, in general, and he is not dismissive of the kids he interviews; but there is a connection he makes with Jesse that impacts him in a way that the interviews don’t.

This is all very indicative of how we operate, as adults—as if there are only certain avenues that are able to teach us. One of my favorite things at my local church is a children’s ministry called “Catechesis of the Good Shepherd.” One of the inherent values of the program is its insistence on the value and necessity of the child and the child’s perspective. It seems so odd to have to say that children are also made in the Imago Dei and are able to hear and express the movement of the Holy Spirit, even though we often treat them as too simple to understand. The beauty of watching a child repeatedly hide a toy sheep so that the toy shepherd can come find them when they are lost is indicative that there is wonder and truth in having a childlike faith.

While Johnny is not having any particular faith revelation in C’mon C’mon, he does have the opportunity to truly listen to the perspective of his nephew, and it changes him. Would it be so that we could bring our walls of routine and understanding down just enough, on occasion, to see the world through the wise eyes of children.