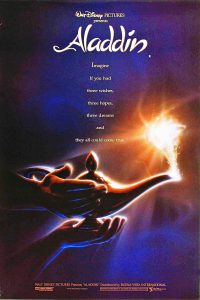 Aladdin is probably my favorite Disney animated feature (enough that this is actually my second article about the film), and it’s not for the reasons you think. Sure, it’s a classic rags-to-riches underdog tale, and it’s got plenty of swashbuckling and memorable characters; and yeah, the animation is phenomenal and the music is catchy; and okay, the voices and archetypes and magical setting and actual magic are just impeccably well-done; and I admit it, it’s funny and sad and poignant and thought-provoking and thoughtful and sweet and unique—

All right, that’s quite a bit. But on top of that, our boy Al has something no other Disney protagonist has ever had: Robin Williams as the Genie.

The Genie is a singular character in all of fiction, I think. He’s the source of almost everything that matters in the film; plot, humor, romance, dialogue, intrigue, danger, risk, redemption, many of the character moments, the climax, the final defeat of the villain, and even the framing device of the story itself.

He’s hilarious and unique, but he also has some really poignant moments; poignant because we can completely relate. Aladdin may be the main character, but the Genie is like us.

God made the human creature to be pretty incredible; we have some gifts that no other created being on earth has; some things that even the angels can’t comprehend.

It’s called the Imago Dei, or “image of God.” We were knitted by His hand and power directly, and given little reflections of things that He does brilliantly; His “communicable attributes.” This means that things like love and kindness, goodness, wisdom, and joy are attributes that we can have and experience, even though we’ll never experience it as brightly or perfectly as He does until eternity.

The Genie has some pretty incredible powers. And, while they aren’t direct reflections of what God gave us in the Imago Dei, they are pretty spectacular; his wish-granting powers have, as far as I can tell, only four limitations; the ones he mentions to Aladdin in the cave (no killing, no love potions, and no bringing people back to life) and the one he bumps up against underwater after Aladdin has been tossed underwater (he can’t do any magic outside of a valid wish). He can accomplish anything outside those limitations, and he proves it by doing so…

…within the bounds of what his master commands.

We’ve barely known Genie for a few minutes before he has told us the most tragic thing about him; he’s a prisoner to his own power. His lamp and bracelets are manacles, and he’s shackled for all eternity to the will of his master, whoever that is. He can only do what his master lets him do; and when that master is an evil one, the things he does shame and dismay him. Then he’s on to the next one, and then the next one; master after master goes by, getting whatever they like, while Genie is left to languish in his lamp until the next unsuspecting master happens along.

By nature, he is a wonder, accomplishing the most incredible magic anyone can imagine, but he’s also enslaved.

Your nature and choice make you a slave, too. You’re bound to a harsh and evil master: your sinful nature. He commands terrible things of you, promising the most enticing of temptations in return, but never delivering them. He tells you lies, and tells lies about you. The things you do under his command heap shame and dismay upon you.

And he’s not content to leave you there. No, your sinful nature wishes to command more power over you; demanding that you use those great gifts God gave you in his service, to puff him up and increase his might. He wants your love, meant for God, but twisted to serve idols. He wants your wisdom, meant to comprehend the mysteries of the Creator, but contorted to find new and devious ways to run from that Creator. He wants your desire for joy, but warped to seek out lesser joys that can never satisfy.

And as you give yourself and your magic over to him more fully, he destroys those around you and laughs at your pain.

Your only hope is a master who will set you free.

Then, by chance, a Good Master one day touches your lamp.

The Genie didn’t know that Aladdin was his final and complete salvation from a life of eternal servitude when the poor beggar rubbed his lamp. And, through twists and turns, Aladdin eventually sets Genie free from the lamp; at great personal cost to himself. He can’t be magically transformed into a prince anymore, if he uses that wish on the Genie’s freedom instead. He essentially gives up his life to save the Genie from his servitude.

Of course, this analogy doesn’t hold up perfectly. It’s better. Jesus is our master, but He also has more power than us! He loves us greatly and set us free at the cost of His life, but He rose from the dead again three days later to lead us as His friend!

Now, His love and friendship mean that we get to participate in His desires as friends, not as subservient genies. He tasks us to display the Imago Dei by ignoring the commands of every evil master, and instead by shouting the glories of our Savior forever.

And, at the end of the age, His PHENOMENAL COSMIC POWERS will give us a great and glorious living space with Him for all time…to explore a whole new world with Him.

Thanks for reading Redeeming Culture. Click here to read our previous article about Aladdin, from April 2016.