The Bear Necessities: Friendship in The Jungle Book
October 18, 2017 by David Atwell 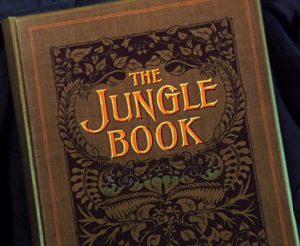 Disney’s The Jungle Book turned 50 years old last week. It was the last film to be overseen by Walt Disney before his death in 1966; and by all accounts, the ending of the film was something he fought for almost to his deathbed.

But the end isn’t the only place you can see his fingerprints; Walt modified the plot, characters, and even the originally-dark tone of Rudyard Kipling’s original book. As the story goes, he gave the writers Kipling’s book, telling them “the first thing I want you to do is not read it.”

What emerged, though, is a beautiful, funny, and immensely catchy film about exile and the pursuit of joy; but friendship is the connecting thread that ties the whole film together.

Get with the Beat, Baggy 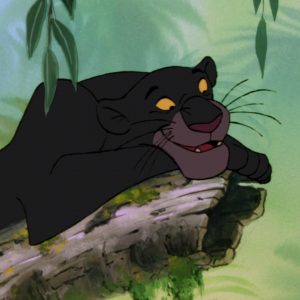 Mowgli’s relationship with Bagheera spans his entire early life; and although the panther seems to abandon the boy to his fate in his frustration with the obstinate man-cub, he is a caring, selfless, honest, long-suffering friend (even when Mowgli doesn’t want it), always willing to run back to his aid despite his frustrations. He’s the sort of friend that everyone needs, even when they don’t really want them, because the pain you get from them protects you and helps you grow.

Faithful are the wounds of a friend; profuse are the kisses of an enemy.
–Proverbs 27:6, ESV

Trust in me, only in me 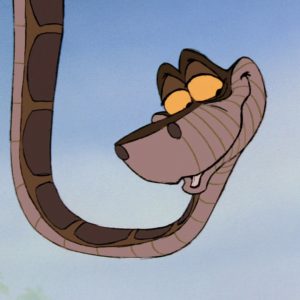 Kaa is the exact opposite. While he presents himself as Mowgli’s friend (he even has a very friendly voice, being voiced by the same actor who lent voice to the original Winnie the Pooh); but in the grand literary tradition of snakes since the Garden, he seeks to confuse Mowgli’s mind, deceive him, and eventually consume him by tempting him with his greatest desire. Friends like this aren’t friends at all; they just want us as long as we can satisfy their desires.

You are of your father the devil, and your will is to do your father’s desires. He was a murderer from the beginning, and does not stand in the truth, because there is no truth in him. When he lies, he speaks out of his own character, for he is a liar and the father of lies.
–John 8:44 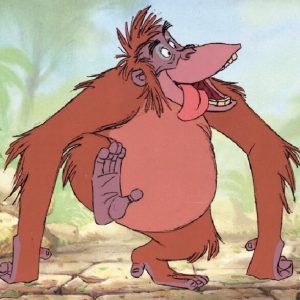 Unlike Kaa, King Louie doesn’t mince words about what he wants from the man-cub. But while he’s not as subtle as the snake, he’s just as selfish. “Give me the power of Man’s Red Flower so I can be like you,” he demands in his remarkably catchy song. Like Kaa, he only wants Mowgli for what the boy can give him – namely, a power he believes the boy has. Louie doesn’t just want something from Mowgli; he wants to become Mowgli, and he’s willing to put a child in danger for it. Don’t be fooled; these types of people (or even orangutans) aren’t really friends, either; they’ll discard us as soon as they run out of uses for us.

Do nothing from rivalry or conceit, but in humility count others more significant than yourselves.
–Philippians 2:3, ESV

That’s What Friends are For 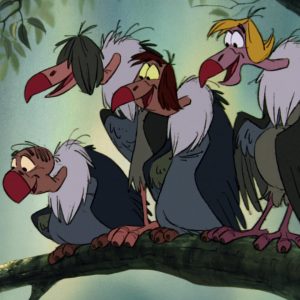 Buzzie, Flaps, Ziggy, and Dizzy the vultures are wildly quick to befriend others. The quartet meet Mowgli at his lowest point, when he thinks he’s lost everyone; and within moments are regaling him with a song about how deep their friendship runs and how committed they’ll be to keep him safe in the jungle. Despite the commitment they claim to have, they quickly flee when Shere Khan attacks—only to suddenly rediscover their courage when Baloo appears to do battle with the tiger. The vultures are probably the most realistic depiction of human friendship in the film: they’re flawed, they’re weak, and (though they may have the best of intentions) they fail. While these friends are helpful and fun to be around, we need to build our lives on a friendship more solid if we’re to stand up against the ravenous predators that are after us.

Then [Jesus] said to [the disciples], “My soul is very sorrowful, even to death; remain here, and watch with me.” […] And he came to the disciples and found them sleeping. And he said to Peter, “So, could you not watch with me one hour?”
–Matthew 26:38, 40, ESV

Everyone runs from Shere Khan 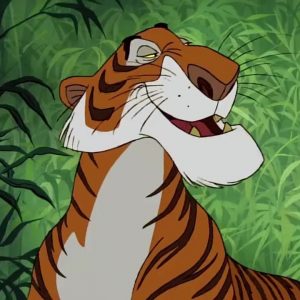 Unlike Kaa and Louie, Shere Khan never claims to be Mowgli’s friend. But his villainy is so affable, so palatable, it’s almost possible to forget that the tiger wants Mowgli dead – not just because he’s hungry, but because he despises what the boy stands for: Bagheera notes that he hates Mowgli because mankind has mastered fire and firearms. The Bible talks about a being who wants to destroy mankind for the power we have; Satan is portrayed as a roaring lion in an unending quest to devour those created in the image of God for His glory, but it’s not much of a stretch to see that lion’s hatred in the eyes of Shere Khan; who seems friendly at a glance, but will destroy you, given but a chance.

Be sober-minded; be watchful. Your adversary the devil prowls around like a roaring lion, seeking someone to devour. […] the God of all grace, who has called you to his eternal glory in Christ, will himself restore, confirm, strengthen, and establish you.
–1 Peter 5:8, 10, ESV 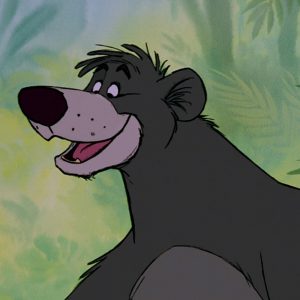 And then there’s Baloo. A true friend, willing to do whatever is best for Mowgli, however reluctantly; Baloo is the emotional heart of The Jungle Book. He’s willing (eventually) to risk hurting the boy by insisting that Bagheera is right about going to the Man-Village. He runs into danger in King Louie’s temple to save Mowgli without a second thought. And, of course, he is willing to sacrifice himself in order to save Mowgli’s life. It’s one of the most on-the-nose moments in film history, as the movie does my job for me with Bagheera’s eulogy for Baloo:

You must remember, Mowgli; greater love hath no one than he who lays down his life for his friend.

This is a quote directly from John 15:13, where Jesus is preparing His disciples for his imminent death on the cross. But He doesn’t stop there- having told His disciples that his command for them is to love one another (John 15:12), and then that love means death (John 15:13), Jesus says,

Jesus is promising that He’ll sacrifice Himself for them. Barely four chapters later, He fulfills that promise. But verse 14 isn’t a warning – “You’d betteer love people, or I won’t be your friend!” – it’s a diagnostic, an indicator. Jesus is essentially saying, “in the family I’m dying to create, we love each other in the same way I love you.”

And that isn’t easy. It should move us to action. It should propel us to love others madly. We’ve been loved greatly; let us lay down our lives saving others from the tiger that pursues them. 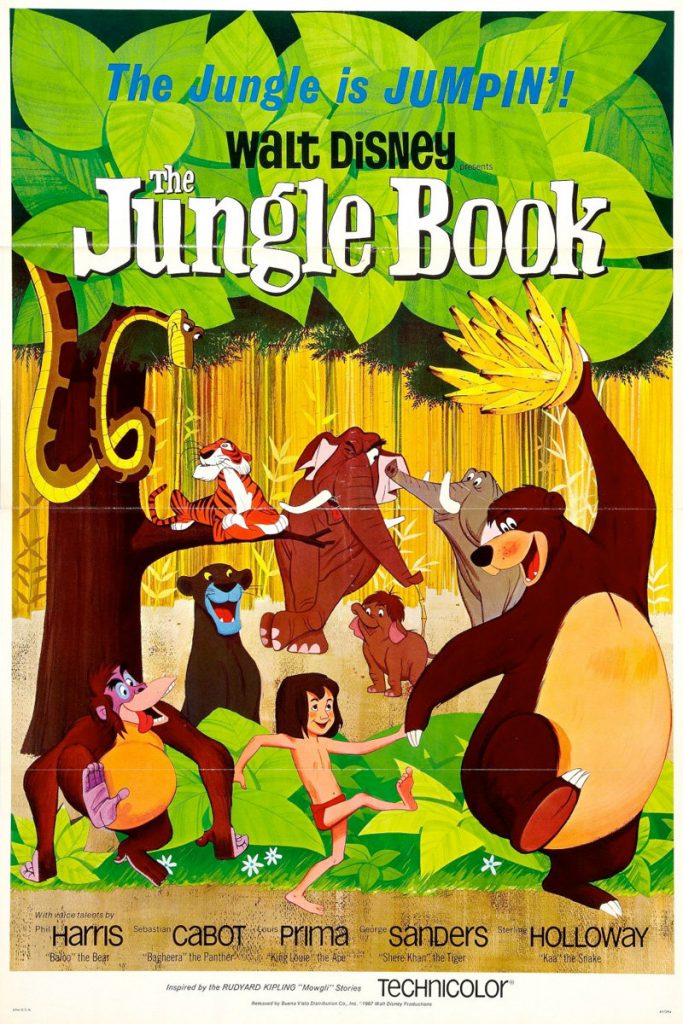 Previous articleReel World: Rewind #021 - Blade RunnerNext article Oh! The Horror... | of the First Day of the Rest of Your Life