Part pirate movie, part ghost movie, part magical fantasy; part action-comedy, part rom-com; part swash, part buckle, and all savvy, Pirates of the Caribbean: The Curse of the Black Pearl dropped anchor in theaters with the lowest of expectations.  Disney thought it would flop.  Executives thought that Johnny Depp as Jack Sparrow was “ruining the movie.”  Critics and audiences were skeptical that a theme park ride could be made into a satisfying story.  I remember; I was one of them.

But, come the summer of 2003, all of us bilge-rats were proven wrong.  And now Pirates has become one of Disney’s most lucrative properties, setting sail this week for the fifth time with Depp, as well as returning couple Orlando Bloom and Kiera Knightley, in search of box office plunder.

I think I’ve charted a course to the reason why the film is so beloved.  And I promise I’ll throw the nautical jokes overboard for the rest of this article.  Well, I’ll try, anyway. 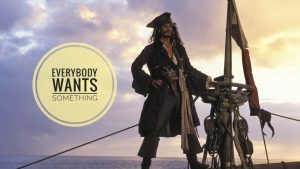 But this film doesn’t leave the people and their desires alone- it gives them obstacles to getting what they want, just as soon as it tells us what it is they want in the first place.  Elizabeth’s obstacle to her adventurous spirit is the stuffy and boring Norrington.  Will’s obstacle on his way to Elizabeth is their relative station and class.  Jack’s obstacle to his ship is Barbossa – but more immediately, the bumbling dock guards Murtogg and Mullroy.  And there we kick off the action.

By the time the Black Pearl arrives to introduce us to Barbossa and his motivation (to feel something again), we’ve already become intimately familiar with what our three leads really want.  We’ve seen them try to get it, and fail.  We’ve even seen some of their secondary motivations.  Other films might have done this in a much clumsier manner:

And this is part of what makes the film so good, so sticky in people’s minds: everybody wants something, and the rest of the film sets about showing how they all pursue it. But it’s neither too subtle nor too clunky.

Not all treasure is silver and gold, mate

The interesting thing about the rest of the movie is the way that it shows what the characters will do to get what they want – and what they won’t.

Jack desperately wants to get his ship back, and he could easily have used Elizabeth as a distraction to steal the Interceptor. But he can’t let her drown. Will, on the other hand, abandons everything he believed about pirates, becoming a pirate himself in order to save the woman he loves.

And that’s something very telling about all of us: what will you do – or not do, or even abandon your principles to do – in order to achieve your goal?

In real life, the situations are rarely so cut-and-dried. Like everything else in the real world, it’s messy. But in general, if you’re willing to devote most of your time, your talent, and your treasure to something, that’s what your true motivation is.

So what is it for you?

You probably have a bunch. Most people do. But is there one big huge thing that you think about longingly? Something you pursue with all your heart? Something that changes the decisions you make about your life in big ways?

Be careful with those things. They can really drive you to something great…or they can drive you to your doom.

Ash in our Mouths

Which brings us to Captain Barbossa, and this great line that Geoffrey Rush made immortal:

The moonlight shows us for what we really are! We are not among the living, and so we cannot die. But neither are we dead! For too long, I’ve been parched of thirst and unable to quench it. Too long I’ve been starvin’ to death and haven’t died. I feel nothin’. Not the wind on my face nor the spray of the sea, nor the warmth of a woman’s flesh. You best start believin’ in ghost stories, Miss Turner. You’re in one! 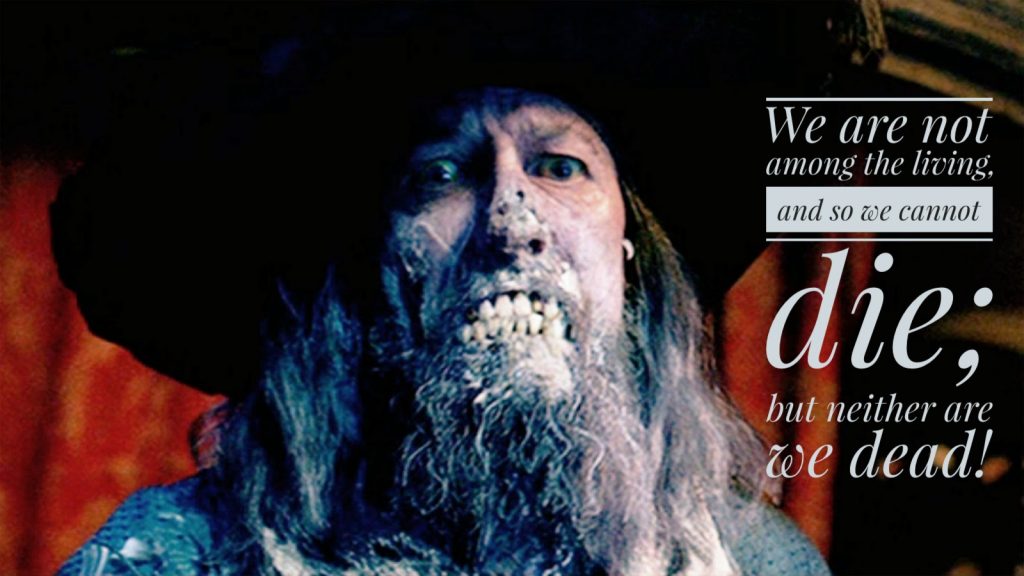 The story comes out that Barbossa and his crew have stolen every coin from a chest of cursed gold, getting what they wanted: treasure. Gold. Wealth. But just as soon as they realized their dream, a hole opened up in their stomachs – both literally and figuratively.

Unable to feel anything but desire, they became shadows and skeletons of their former selves. They seek and pursue satisfaction and salvation in vain. And the moonlight alone can show people the truth of their nature; dead but not resting as they frantically seek something that’s forever out of reach.

“And such were some of you.” In 1 Corinthians, Paul recounts a life similar to Barbossa’s.

Paul describes people desperately seeking satisfaction, seeking meaning, seeking hope. They seek it in sex, and idolatry, and drink, and parties, and the wealth of others. But they never find it.

They’re dead men walking, skeletons with the stench of death. And, like Barbossa and his crew, they can’t twitch their way back to life.

They can’t remove the curse on their own.  Dead men can’t restore life.  They have sailed the Caribbean for a decade trying, but they only become more dead.

To be restored to life, they need the blood of an innocent man to be shed on their behalf; the blood of one they rejected, or more correctly, of his son. And with a wound, what was begun with the blood of greed and sin has been undone by the blood of the innocent.

In a single moment, the debt is paid by blood, and the vilest, most undeserving sinner is able to sail away as a free man.

Arr, thanks for reading Redeeming Culture! Enjoy Dead Men Tell No Tales tonight, and make sure to let us know what you thought of it!  Drink up, me hearties!

Next article Oh! The Horror... | of Displacing God

Pingback: #137 – Dead Men Tell No Tales and The Allure of the Pirate Life | Reel World Theology