A Really Bad Case of the Mondays
October 4, 2017 by Ryan Earnhart

So if you are a subscriber to Netflix, as many are, then you have probably seen a trailer or thumbnail for What Happened to Monday recently. The concept has been explored before by many sci-fi films and books: overpopulation. This premise inevitably leads to trying to save a child from being killed, or smuggling one to safety that managed to escape already. This movie seeks to double-down, or septuple-down, on that inevitability. 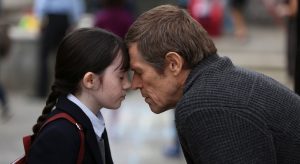 In What Happened to Monday, a grandfather comes up with a plan to save 6 of his 7 new granddaughters from cyrogenic sleep m/andated by the Child Allocation Act, so that he can keep all 7. There are themes of identity, family, sacrifice and the “greater good” all tucked into this movie with some twists, mystery, and action to keep you interested.

(Be forewarned, there is graphic violence, strong language, and a very intimate sex scene that leaves only the front of the bathing suit area a mystery. So if any of those are no-go’s for you, skip watching and maybe just read about the concepts it brings up in this article.)

If those things aren’t cause for concern, then know that the movie is a little slow paced in parts, and the themes it brings up are mostly left up to the audience to consider for themselves. The script may be the weakest link in the chain for this film: whenever there appears to be a great theme to run with, it instead drops it and moves on, after a pause. It’s like the director wants you to hit the pause button and discuss the previous scene with a book club-style gathering. The visual style mostly lacks distinctness, even with a futuristic setting, but to its credit the style doesn’t get in the way and should let the film age well. I will also concede that it is visually impressive when they show seven versions of Noomi Rapace on the screen at once, with nothing to clue you in on the editor’s techniques.

But truly, Rapace’s performance as the seven distinct sisters is what makes the film most worthy of your time. Although even that seems held back by a script that doesn’t give her much to work with, you can still see her effort despite her circumstance. Glenn Close and Willem Dafoe, on the other hand, may have been sleepwalking through their roles with what we get to see on screen.

A Week as Someone Else Makes One Weak

Willem Dafoe’s character, Terrence, concludes that if he can let each of the 7 identical twins girls outside once per week, then they each can share one life together in the real world; leaving them safe inside for the other 6 days of the week. This works for 30 years, so his foresight seems to have been pretty spot on; but Thursday shows the most strain from this double life. Saying that one day a week is not enough to experience real love, in a little bit of foreshadowing, they are only capable of one-night stands like Saturday alludes to having frequently.

Experiencing love each and every day is very important to all of us. Unfortunately, the love of our family and even the deeper love of our spouse or children can seem inadequate at times. There’s an old expression that many a pastor will recite to his congregation: “You can’t just be a Christian on Sunday and then live the rest of your week like you’re not.” For Christians, Sunday is a day of worship and prayer and re-energizing. The power behind all of those is experiencing God’s love for us. We experience His love through the music, through the messages in scripture and through the other Christians around us. In the Bible it tells us not to abstain from meeting together specifically to encourage each other to love.

But even if a Christian shows up to church every Sunday, if they wait for 6 more days before they experience God’s love again, it is a long and depressing week, waiting for the next Sunday. It is a healthy and worthwhile goal to seek out deeper and stronger love, each day building on the love you experienced yesterday; so I’m with Thursday on this one.

What day am I again?

Speaking of Sundays, Sunday has a sad moment of clarity as she lies on the floor bleeding after the Child Allocation Bureau agents raid their little haven. She doesn’t have a strong sense of self. 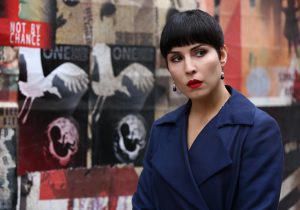 The others say she’s the “believer”, that she can’t lose hope. But as Sunday dies, she confesses that she doesn’t even know who she is. She may know that she is one of 7 identical sisters, and that she plays Karen once a week. She may know that Karen is a successful banker, but Sunday doesn’t know who she is. Would she be a banker if there situation allowed them the freedom to pursue any goal she chose? Would she be successful at her pursuits? Would she have pursued a mate, or stayed single? When choices are made for you and you exercise little (if any) free will, especially for 30 years, the line between you and the one making the choices becomes blurry.

In the Christian life, we are born with free will and we choose to rebel against God and His plan for us. Then he shows us His plan and teaches us and empowers us to carry out that plan. Just like Sunday through Saturday, we have to wake up every morning and make sure that we look right. Only we are making sure we look like Christ instead of Karen. We may seem to lose some individuality but our identity, knowing who we are, is actually stronger. We are a child of God. We are becoming more like Christ.

We are tasked with a purpose and mission in life that stretches into eternity. So where I sided with Thursday on the last point, I’ll have to side against Sunday on this one. Our collaborative effort to look like Christ and be Christ to the world actually grounds us so we can be absolutely sure of our identity. Also a point that Thursday seems to understand, taking on the name Karen as her own at the end of the movie.

Did we skip a day?

This may not be another theme, but since we already left the spoiler warning in the dust can I just mention some of the giant loopholes in the plot? 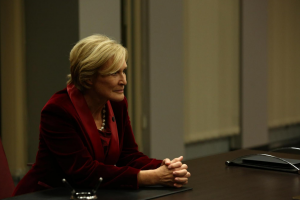 If there were a society that has an overpopulation problem that necessitates only one child per family, how would a government/corporation/etc. convince the populace that we have the capacity to hold all the extra children in cryogenic stasis until the world can sustain them? Wouldn’t that take more resources?

Also, why do they keep the extra siblings until they are a handful of years old before cremating them? Wouldn’t it save more resources to kill them as newborns? Anyway, with as thin as the script was, you’d think they could have at least tightened up their premise a little bit.

So did I miss anything? Were there other themes that got dropped like a bad habit that you think were worth discussing? Let us know in the comments, on Facebook or on Twitter.

And have a good day.

Next article Oh! The Horror... | of the Liturgy of Michael Myers