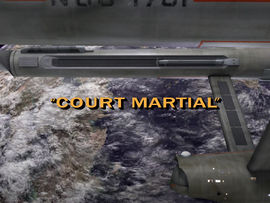 Captain Kirk is implicated in the death of a crewman, and taken to trial to determine if he was negligent, cowardly, or a murderer. His prosecutor is an old friend, his crewmates all called to testify against him, and the most damning testimony from his own ship’s computer. But all may not be as it seems, as Spock discovers when he wins a game of chess.

When Kirk talks to his old friend, Lt. Shaw, he’s characteristically cocky. She calls him on it, and that is his reply.

She’s not convinced, but it makes sense. Why would you be concerned about a verdict that is, in your mind, secure? Of course, at this point, he had not seen the video that clearly showed him committing culpable negligence in the case of Benjamin Finney. At this point, he had not faced the scorching stares of the tribunal or Finney’s daughter in the courtroom. He had not yet been set up to be knocked down as an example to the rest of the fleet. He was certain that he would be acquitted easily. His understanding of what awaited him was that it would be a simple and swift result. And so he had a great confidence.

Many of us face the world with this confidence, too. We may have worries and concerns about the momentary events that befall us from time to time, but about our eventual future, we live life confidently; our eternal future secure.

Then, though, we see the evidence that we are totally depraved. We see our heart, blackened by sin. It’s not what we saw in our own heart, but it is definite – and so ugly. In a moment, our confidence drains away. We become unsure of ourselves. We falter, we fail. We despair. Maybe this is the way you face the world; unsure. Or even sure that it won’t go well.

But we are saved by grace; Another has taken our place on the stand. He pled guilty, though innocent, so that we can plead innocent, though we are guilty. It is an overwhelming testimony that immediately acquits us of all charges. And now we can again have great confidence in our eternity; only this time, it is the confidence of Another.

The confidence of the Innocent Man.

Thank you for reading Redeeming Culture! Come back tomorrow for more Trektember as we look at episode 15 of Star Trek: “The Menagerie”.